Eva Perón was the second wife and political partner of President Juan Perón (1895–1974) of Argentina. An important political figure in her own right, she was known for her campaign for female suffrage (the right to vote), her support of organized labor groups, and her organization of a vast social welfare program that benefited and gained the support of the lower classes.

The youngest of five children of Juan Duarte and Juana Ibarguren, María Eva Duarte was born on May 7, 1919, in the little village of Los Toldos in Buenos Aires province, Argentina. Following the death of her father, the family moved to the larger nearby town of Junín, where her mother ran a boarding house. At the age of sixteen, Evita, as she was often called, left high school after two years and went to Buenos Aires with the dream of becoming an actress. Lacking any training in the theater, she obtained a few small parts in motion pictures and on the radio. She was finally employed on a regular basis with one of the largest radio stations in Buenos Aires making 150 pesos every month. Her pay had increased to five thousand pesos every month by 1943 and jumped to thirty-five thousand pesos per month in 1944.

In 1943 Eva met Colonel Juan Perón, who had assumed the post of secretary of labor and social welfare in the military government that had recently come to power. Eva developed a close relationship with the widowed Perón, who was beginning to organize the Argentine workers in support of his own bid for the presidency. Becoming Perón's loyal political confidante (one with whom secrets are trusted) and partner, she helped him increase his support among the masses. In October 1945, after Perón was arrested and put in prison by a group of military men who did not support him, she helped to organize a mass demonstration that led to his release. A few days later, on October 21, 1945, Eva and Juan Perón were married. 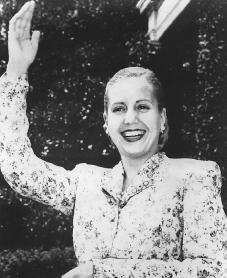 Eva Perón.
Courtesy of the
Library of Congress
.

Now politically stronger than ever, Perón became the government candidate in the February 1946 presidential election. Señora de Perón participated actively in the campaign, something no Argentine woman had ever done. She directed her appeal to the less privileged groups of Argentine society, whom she labeled "los descamisados" (the shirtless ones).

Following Perón's election, Eva began to play an increasingly important role in the political affairs of the nation. During the early months of the Perón administration she launched an active campaign for national women's suffrage, which had been one of Perón's campaign promises. Due largely to her efforts, suffrage for women became law in 1947, and in 1951 women voted for the first time in a national election.

Eva also assumed the task of gathering the support of the working classes and controlling organized labor groups. Taking over a suite of offices in the Secretariate of Labor, Perón's former center of power, she used her influence to hire and fire ministers and top officials of the General Confederation of Labor, the chief labor organization in Argentina. Although not given the official title, she acted as the secretary of labor, supporting workers' demands for higher wages and backing a number of social welfare measures.

Because Eva came from a lower-class background, she identified with the members of the working classes and was strongly committed to improving their lives. She devoted several hours every day to meeting with poor people and visiting hospitals, orphanages, and factories. She also supervised the newly created Ministry of Health, which built many new hospitals and established a successful program to fight different diseases.

A large part of Eva's work with the poor was carried out by the María Eva Duarte de Perón Welfare Foundation, established in June 1947. Its funds came from contributions, often obtained with force, from trade unions, businesses, and industrial firms. The foundation grew into an enormous semiofficial welfare agency that distributed food, clothing, medicine, and money to needy people throughout Argentina and on occasion to those suffering from disasters in other Latin American countries.

Enjoying great popularity among the descamisados, Eva Perón helped greatly in maintaining the loyalty of the masses to the Perón administration. On the other hand, her program of social welfare and her campaign for female suffrage led to considerable opposition among the gente bien (upper class), to whom Eva was unacceptable because of her humble background and earlier activities. Eva was driven by the desire to master those members of the government that had rejected her, and she could be cruel and spiteful with her enemies.

Death and place in history

In June 1951 it was announced that Eva would be the vice presidential candidate on the reelection ticket with Perón in the upcoming national election. Eva's candidacy was strongly supported by the General Confederation of Labor, but opposition within the military and her own failing health caused her to decline the nomination. Already suffering from cancer, Eva died on July 26, 1952, at the age of thirty-two. After Eva's death, which produced a huge display of public grief, Perón's political fortunes began to decline. He was finally removed from office by a military takeover in September 1955.

Eva Perón's friends and enemies agreed that she was a woman of great personal charm. Her supporters have elevated her to popular sainthood as the champion of the lower classes. The favorable portrayal of her in the play Evita, first staged in 1978, and in the 1997 film of the same name, brought Eva to the forefront of the American public. By a large part of the officer corps of the military, however, she is greatly despised. There is still considerable difference of opinion regarding her true role in the Perón administration and her true place in Argentine history.

Wow. this helped me sooo much. I had to do a biography on her and the book didnt really help me at all. Thanks soo much. Eva is an awesome woman!! dont you agree?
3
katie

Thank you so much! This was very very useful! Thanks again! GO EVA!
4
Talecia

Eva is a great woman. This biography about her helped me sooo much with the project that im doin about her. More people shoul check this out and then post your comment.
5
Saul

This biography really helped me for my Spanish fluent speakers 2 project I'm doing on her. I got all my info from here. Thanks. She sounded like a strong and a good woman
6
Marki Smith

I think this is a very informal artical. It brought forth very usefu information. I would like to thank the author for writig this.

I think that Evita definitely deserved at least some of the credit that this article gives her; however, I think that this does make the mistake of skimming over anything that puts her in a negative light, such as the controversy over her Rainbow Tour in Europe and whether the trip was for the sole purpose of depositing money in Switzerland, as some anti-PerÃ³nists believe. Otherwise, this was very helpful in giving general information about her life.
8
Pam

I had to come to look for info on Evita after watching the musical film twice, I was intrigued by her charm, sophistication and how she fought for the Argentinian's democarcy.I had to go behind the scenes to find the real Evita. Very sad she had to die at such a tender age.
9
Francil

She was great woman and the military and the upper-class were just jeolous of the attention the lower-class was getting. Deep inside they knew she was awesome at what she did for her people. BTW great information it really helped me with my project.
10
Wally

After visiting the Eva Peron Museo in Buenos Aires, it was far from clear how and or why she died. Thank you for a precise, detailed history presenting all sides to the story, something we had to "assume" from our personal knowledge and our time in BA. Amazing woman! Well documented.