An internationally famous first lady, Jacqueline Kennedy Onassis raised her two children alone after the assassination of President John F. Kennedy (1917–1963). After a seven-year remarriage to Aristotle Onassis (c. 1900–1975), she turned to a career as a book editor.

Jacqueline Lee Bouvier was born on July 28, 1929, to Janet Lee Bouvier (1908–) and John (Jack) Vernon Bouvier III (1892–1957). Jackie was a strong and independent child. She was initially considered a discipline problem at Miss Chapin's, the fashionable school on Manhattan's East Side that she attended as a young girl. Janet and Jack had a troubled marriage, and they were divorced in 1940. Jackie lived with her mother, who in 1942 remarried Hugh Dubley Auchincloss, Jr. (1897–1976), a lawyer from a wealthy old family. The Auchinclosses were much wealthier than the Bouviers, and Jackie and her sister Lee lived with their mother and her new husband.

Jackie's mother's remarriage created conflict in the family. Although Jackie adored her father, she saw less and less of him, especially after her mother and stepfather moved their family to Washington, D.C. The summers were spent at the Auchincloss home, known as Hammersmith Farm, in Newport, Rhode Island. In 1944 Jackie was sent to boarding school at Miss Porter's in Farmington, Connecticut.

Jackie was a beautiful and elegant young woman. When she made her social debut, a top newspaper gossip columnist named her Debutante of 1947. Jackie began her college education at Vassar, where she seemed embarrassed by the reputation attached to her social success. She was a serious student who worked hard and made the dean's list. She spent two years at Vassar, and then studied for a year in France through a program offered by Smith College. After she returned to the United States, Jackie finished college at George Washington University in Washington, D.C. She then took a job at the Washington Times-Herald newspaper as a photographer.

Life as a Kennedy

In 1951 Jackie met John Fitzgerald Kennedy for the first time. The next year Kennedy was elected senator from Massachusetts and moved to Washington. The two continued to see each other, and they became engaged in June 1953. On September 12, 1953, Jacqueline Lee Bouvier married Kennedy at an enormous wedding that was the social event of the season.

Jackie Kennedy was a shy, private woman with little experience in politics or 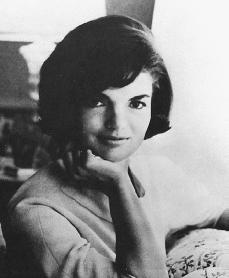 Jacqueline Kennedy Onassis.
knowledge of politicians, but she was a help to her husband in many ways. She worked with him on his public speaking, helping him develop the charismatic (or charming) style for which he would become so famous.

In 1956 there was talk that John Kennedy would be the Democratic vice presidential nominee. Many members of the Kennedy family attended the convention, which was an exciting and exhausting one. Jackie was there to lend her support, despite the fact that she was seven months pregnant. Although John Kennedy gave a speech nominating Adlai Stevenson (1900–1965) as the Democratic candidate for president, Estes Kefauver (1903–1963) was selected as the vice presidential candidate.

On August 23, 1956, soon after her husband had left for a short vacation, Jackie went into premature labor. The baby was stillborn, or dead at birth, and Jackie's brother-in-law Bobby Kennedy (1925–1968) comforted her and made the arrangements for the baby's burial. In 1957 Jackie suffered another loss when her father died. This was also a difficult period in the Kennedy marriage. Much was rumored at the time, and has been written since, about the various affairs that John Kennedy had both before and during his presidency. Undoubtedly, these rumors put a strain on his and Jackie's marriage.

On November 27, 1957, Caroline Bouvier Kennedy was born. Just months after Caroline's birth, her father was up for reelection as senator from Massachusetts, and Jackie was active in the 1958 senatorial campaign as well.

Soon after John Kennedy was reelected senator and returned to Washington, he began to seek the presidential nomination. Jackie campaigned vigorously for her husband until she became pregnant in 1960. Even afterwards she continued to help as much as she was physically able until the birth of her son, John Jr.

As soon as John Kennedy was elected president, Jackie began working to reorganize the White House so that she could turn it into a home for her children and protect their privacy. At the same time she recognized the importance of the White House as a public institution and a national monument. She formed the White House Historical Association to help her with the task of redecorating the building, as well as a Special Committee for White House Paintings to further advise her. She wrote an introduction to "The White House: A Historical Guide," and she also developed the idea of a filmed tour of the White House that she would conduct. The tour was broadcast on Valentine's Day 1962, and it was eventually distributed to 106 countries.

In April of 1963 the Kennedys announced that Jackie was once again pregnant. On August 7, 1963, Patrick Bouvier Kennedy was born. He died three days later. Another tragedy struck soon after. Jackie Kennedy was riding by her husband's side when he was assassinated on November 22, 1963, in Texas. In the days that followed John Kennedy's death, the image of his widow and children, and the dignity with which they conducted themselves, were very much a part of the nation's experience of mourning and loss.

After leaving the White House

In the years immediately after her husband's death, Jackie Kennedy was seen very much in the role of his widow. At the same time there was constant speculation about whether or not she would remarry. Jackie was actively involved in brother-in-law Robert Kennedy's campaign for president in 1968. After his assassination in June 1968, she was again a well-known figure at a very public funeral.

In October 1968 Jackie Kennedy married Aristotle Onassis (c. 1900–1975), a wealthy Greek businessman. He was sixty-two and she was thirty-nine. Jackie spent large portions of her time in New York to be with her children. As the years went by, the Onassis marriage was rumored to be a difficult one, and the couple began to spend most of their time apart. Aristotle Onassis died in 1975. Widowed for a second time, Jackie returned permanently to New York. For the next two decades Jackie worked as a book editor for several large publishers in New York City.

In 1994 Jackie Kennedy told the public that she was being treated for non-Hodgkin's lymphoma (a form of cancer), and that her condition was responding well to therapy. However, the disease proved fatal on May 19, 1994, when she died in New York City. She is buried next to John F. Kennedy in Arlington National Cemetery.

In death, Jackie Kennedy remains a symbol of strength in American culture. Her courage during some of the country's darkest periods has inspired countless books about her and solidified her important role in one of the nation's favorite families.