In 1981 Sandra Day O'Connor became the first woman to serve as a justice in the 191-year history of United States Supreme Court. A Republican appointed by Ronald Reagan, O'Connor has grit and intelligence that has made her an interesting figure in the nation's highest court of law.

Life on the Lazy B

Sandra Day O'Connor was born in El Paso, Texas, on August 26, 1930. Her parents, Harry and Ida Mae Day, owned a cattle ranch in southeastern Arizona called the Lazy B. In the beginning, the ranch did not have electricity or running water. Sandra grew up branding cattle, learning to fix whatever was broken, and enjoying life on the ranch.

Her experiences on the ranch shaped her character and developed her belief in hard work, but her parents also wanted O'Connor to gain an education. Living in such a remote area, the options for going to school were limited, and she had already shown that she was quite bright. By age four, she had learned how to read. Exploring places and schools that would be the best match for O'Connor's abilities, her parents decided to send her to El Paso to live with her grandmother and attend school. In El Paso she attended Radford School for girls and Austin High. She spent her summers at the ranch and the school years with her grandmother. She graduated high school early at the age of sixteen.

In 1946, after competing against many other people and despite the probability that she might not be accepted because she was a woman, O'Connor was accepted to Stanford University. In a program in which she finished two degrees in just six years instead of seven, she graduated in 1950 with a bachelor's degree in economics and received a law degree in 1952. While she was in law school, she was a member of the board of editors of the Stanford Law Review, a very high honor for a law student. Upon graduation she was at the top of her class, graduating third in a class of 102 students. O'Connor was just two places behind another future Supreme Court justice, William H. Rehnquist (1924–).

After graduating, O'Connor tried to get a job in Los Angeles and San Francisco law firms, but because of the prejudices against women at that time (unfair treatment based on her sex), she could not get a job as a lawyer. She was offered a position as a legal secretary, which did not match her education and training. Instead, she took a position as a deputy county attorney in San Mateo, California. During this time, she also married John O'Connor, who was one class behind her at Stanford. Upon his completion of law school, the couple moved to Germany, where he served as an attorney in the U.S. Army. She worked as a civilian attorney, specializing in contracts.

Upon their return to the United States, the O'Connors settled in the Phoenix, Arizona, area. O'Connor and another lawyer opened a law office in suburban Maryvale, but for the next few years she devoted most of her time to raising her three sons, who were born between 1957 and 1962. She also joined many groups to improve her community and she began to take an active role in local Republican politics.

In 1965 O'Connor returned to full-time employment as one of Arizona's assistant attorneys general, an assistant to the chief law officer in the state. In 1969 the state senator from her district resigned, which led Governor Jack Williams (1909–1998) to appoint O'Connor to replace him. When the position was open for election in 1970, O'Connor won it and was easily reelected again in 1972. She was chosen as the Republican majority leader in the state senate in 1972. This was the first time that any woman anywhere in the country had held that position. 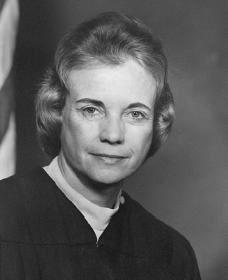 Sandra Day O'Connor.
Courtesy of the
Library of Congress
.

In 1974 O'Connor left the state senate and became a county judge in the Maricopa County Superior Court. In 1979 Bruce Babbitt (1938–), the governor of Arizona, appointed her to the Arizona Court of Appeals.

During the last month of the 1980 presidential campaign, candidate Ronald Reagan (1911–) needed more support from female voters. He said that if he were elected he would appoint a woman to the Supreme Court. In July 1981 President Reagan kept his promise and nominated Sandra Day O'Connor. The Senate quickly and unanimously confirmed her. She became the first female justice in the 191-year history of the court. When Reagan selected her for the Supreme Court, she became the first person appointed in twenty-four years with state court experience and the first in thirty-two years with lawmaking experience.

Many people expected O'Connor to be solidly conservative (to work to preserve or keep traditions and resist changes) in her decisions on the Supreme Court. In fact, many conservative politicians objected to her appointment. They thought she would not oppose abortion (the termination of a pregnancy) because she was a woman. Abortion is a key issue for Republican conservatives. However, many women support abortion rights or the right for a woman to choose.

O'Connor made this issue somewhat confusing for the people who were studying her because she was not part of the organized women's movement which supports abortion. Although the Moral Majority (a very conservative Christian group opposing or against abortion) complained that O'Connor was in favor of abortion, she had cast votes against as well as for it in the legislature. As a justice, she aligned herself with the opponents of abortion (people against abortion).

Although she was not a strong supporter of the women's movement, O'Connor was a founder of both the Arizona Women Lawyers Association and the National Association of Women Judges. She also had fought to remove discrimination (or unequal treatment) against women from her state's bar (the body that governs law) rules and community property laws. As a justice, she was against discrimination based on gender. Her most famous Supreme Court opinion (a formal written statement by a judge) was in the court case Mississippi University for Women v. Hogan (1982). In this decision, the Supreme Court ruled that it was unconstitutional for a state nursing school to refuse to admit men. With this decision, she displayed her ability to rule on equality issues that affect men.

Second decade on the Supreme Court

Supreme Court justices are important people for any president in office. Their rulings and votes are very influential and affect law and justice in the entire country. If an important issue is at stake in a case or a vote, the justices decide the way laws are carried out, which may be at odds or in agreement with a particular president or administration. O'Connor made decisions that sometimes confused presidents who wanted to be able to depend on her to vote in a certain way. By 1990 her vote had become unpredictable. In many decisions both sides tried to win her support.

During the 1990s, O'Connor was an important figure in determining the direction of a number of freedom rulings by the Supreme Court. These rulings included an interpretation of freedom of speech (rights to speak out publicly or privately) and censorship (control over what people may see, do, read, write, or hear). She also worked on a ruling about control of the Internet and cases about freedom of religion. She voted against a state-required moment of silence in public schools.

She also was involved in other court cases that ruled on privacy issues that were very important to American people. In a 1992 case against abortion rights, Planned Parenthood v. Casey, O'Connor was one of the majority who voted to keep abortion legal for women. In other words, abortion was a woman's private decision.

O'Connor also influenced the court in cases involving discrimination and harassment (or unwelcome verbal or physical contact) based on gender. She gave the deciding vote in a decision against affirmative action in Adarand v. Pena (1995). Affirmative action began during the presidency of Lyndon B. Johnson (1908–1973). It was a program to improve opportunities for women and minorities in education and in the workplace.

One of the most important decisions that O'Connor took part in during her second decade on the Supreme Court was the result of one of the closest presidential elections in American history. When the votes from Florida were counted from the 2000 presidential election, the results were so close that many people wanted a recount. The justices stepped in and stopped a recount. With this ruling, they decided the election and Bush became president thirty-five days after election day.

Third decade on the Supreme Court

Early in 2001, rumors were circulating that O'Connor was planning to retire from the Supreme Court. She said they were not true, and she has remained in the center of many critical issues. In July of the same year she made a prominent speech to the Minnesota Women Lawyers Association about the death penalty. O'Connor also talked about the issue of people who have been sentenced to the death penalty and then have been found innocent and set free. She questioned the court-appointed lawyers who represented some of the people sentenced to the death penalty. She said that defendants who were represented by court-appointed lawyers were more likely to be found guilty and sentenced to the death penalty. These reversed rulings (in which convicted people go free) are based on DNA evidence, the scientific evidence based on a person's identity that is established by genetic code found in hair, blood, and so forth. She has made comments that she thinks it might be important to look more closely at the counsel (attorneys) that are assigned to these cases and the process for convictions. Many of O'Connor's decisions while on the Supreme Court have been in support of the death penalty.

In 2002 O'Connor offered a bit more insight into her complex character by publishing the memoir Lazy B: Growing up on a Cattle Ranch in the American Southwest. She wrote it with her brother H. Alan Day. In it, O'Connor offers a look into how her Arizona ranch roots shaped her life, career, and views.

Although her decisions have not always been popular with women's rights activists, O'Connor still is considered to be a role model for women.

O'Connor, Sandra Day, and H. Alan Day. Lazy B: Growing Up on a Cattle Ranch in the American Southwest. New York: Random House, 2002.

this is a very good web site to get informatin on sandra...
thanks!
2
Kameron Stanley

Is Sandra Day O'Connor a member of PEO? I am trying to gather a list of prominent women who are PEO members.