The Spanish painter Joan Miró was one of the first surrealists (artists who created art that emphasized fantastic imagery who were part of a movement called surrealism that began in the early twentieth century). Miró developed a highly personalized visual language that originated from prehistoric and natural sources.

Joan Miró was born the first son of Michel Miró Adziras and Dolores Ferra on April 20, 1893, in Montroig near Barcelona, Spain. He came from a long line of hardworking craftsmen, and his father also worked as a goldsmith and a watchmaker. Although Miró did poorly at school, he began drawing regularly at the age of eight. (His sketchbooks of 1905 contain nature studies from Tarragona and Palma de Majorca, both areas in Spain). In 1907 he attended the Lonja School of Fine Arts in Barcelona where he received encouragement from his teachers. After a brief period working as a clerk, he attended the Gali School of Art in 1912, also in Barcelona.

After Miró completed his artistic education in Barcelona, he produced portraits and landscapes in the Fauve manner, a style of painting popular around 1900 that emphasized brilliant and aggressive colors. He had his first one-man show in Barcelona in 1918 and later that year he became a member of the Agrupacio Courbet, to which the ceramist Joseph Llorenz Artigas belonged.

In 1919 Miró made his first trip to Paris, France, and thereafter he spent the winters in Paris and the summers in Montroig. He met members of the Dada group, an artistic and literary movement which sought to expand the boundaries of conventional (having to do with the common and the unoriginal) art. His first one-man show in Paris was held in 1921 and his paintings of this period reflect cubist (having to do with an artistic movement in the early twentieth century which used geometric shapes) influences. His painting, Montroig ( The Olive Grove; 1919), for example, has a frontal, geometric pattern greatly influenced by cubism.

The Tilled Field (1923–1924) marked the turning point in Miró's art toward a personal style. In the midst of a landscape with animals and delicately drawn objects are a large ear and eye; thus the person of the painter comes into the picture. The change in his art was furthered by his encounter with the works of Paul Klee (1879–1940), Wassily Kandinsky (1866–1944), and Jean Arp (1887–1966).

Miró's aim was to rediscover the sources of human feeling, to create poetry by way of painting, using a vocabulary of signs and symbols, plastic metaphors (an implied similarity between two different things), and dream images to express definite themes. He had a genuine sense of humor and a lively wit, which also characterized his art. His chief consideration was social, to get close to the great masses of humanity, and he was deeply convinced that art can make a genuine appeal only when returning to the roots of experience. In this respect Miró's attitude can be compared to that of Klee.

Miró was connected with the surrealists from 1924 to 1930. Surrealism was a source of inspiration to him, and he made use of its 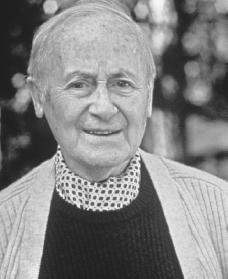 Joan Miró.
Reproduced by permission of
Archive Photos, Inc.
methods; however, he never accepted any surrealist "doctrine," or teachings. Rather, his art, like Klee's, seems more connected to modern fantastic art. Under the impact of surrealism Miró painted the Harlequin's Carnival (1924-1925) with its frantic movement of semiabstract (having both recognizable and unrecognizable qualities) forms. In 1926 he worked together with Max Ernst (1891–1976) on the sets and costumes for Sergei Diaghilev's ballet Roméo et Juliette.

In 1936 Miró fled to Paris during the Spanish Civil War (1936–39; a revolt against the conservative Republican government). The following year he created a large mural, the Reaper, for the Spanish Pavilion at the International Exposition in Paris. His work began to achieve great power through increased simplicity, intensified color, and abstraction, as in the Bullfight (1945), Woman and Bird in Moonlight (1949), and Painting (1953). He was awarded the Grand Prix International at the Venice Biennale for his graphic work.

Miró's most famous monumental works are the two ceramic walls, Night and Day (1957–59) , for the United Nations Educational, Scientific and Cultural Organization (UNESCO) building in Paris; the mural painting (1950) and the ceramic mural (1960) for Harvard University in Cambridge, Massachusetts; and the ceramic mural (1967) for the Guggenheim Museum in New York City. In 1975 Miró demonstrated his devotion to his native country with the donation of the Miró Foundation to the city of Barcelona, Spain. The building, which houses his works and the exhibitions of other artists, was designed by the artist's great friend, Josep Lluis Sert. One exhibition room was dedicated to the showing of works by young artists who had not yet been discovered by the public. Miró died in Palma de Majorca, Spain, on December 25, 1983, at the age of ninety.

Miró enjoyed international acclaim during his long and productive career. He was one of the many outstanding Spaniards—including Pablo Picasso (1881–1973), Juan Gris (1887–1927), Salvador Dali (1904–1989), and Francis Picabia—who, by belonging to the School of Paris, helped to establish the high esteem in which it was held during the first half of the twentieth century. And like many of those other artists, Miró continued to energetically produce his art and to experiment with form and subject long after the years of his initial celebrity had passed.