Norman Mailer, American author, film producer, and director, wrote The Naked and the Dead, one of the most famous American novels about World War II (1939–45; a war in which Germany, Italy, and Japan fought against Great Britain, France, the Soviet Union, and the United States). Only in his later political journalism did he reach that level of achievement again. 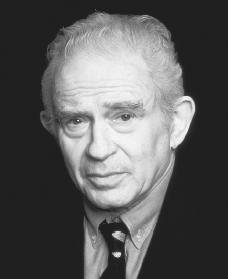 Norman Kingsley Mailer was born in Long Branch, New Jersey, on January 31, 1923, the son of Isaac Barnett Mailer and Fanny Schneider Mailer. His father, an accountant, was originally from South Africa, having traveled to America by way of England. His mother's father was a rabbi (a leader of the Jewish religion). Mailer's family moved to Brooklyn, New York, when he was four. Mailer was an excellent student who loved to build model airplanes. At nine years old his mother encouraged him to write a story. Writing one chapter a day, the young Mailer completed a story that he called "An Invasion of Mars."

Mailer graduated from high school in 1939 and earned a bachelor of science degree in aeronautical (dealing with flight) engineering from Harvard University in Massachusetts. He won a college fiction contest, wrote for the Harvard Advocate, worked on two (unpublished) novels, and had a novella (longer than a short story, but shorter than a novel) published. Drafted into the army in 1944, he served in the Philippines in an infantry unit (a group of soldiers on foot) as both a clerk and a rifleman.

In the army Mailer knew he was living the material for his third novel. From notes in letters to his wife, he composed a brilliant narrative around an army unit's taking of a Japanese-held Pacific island. Borrowing the natural writing style of writers such as John Dos Passos (1896–1970) and James Farrell (1904–1979), the use of symbols from Herman Melville (1819–1891), and the journalist's observations from Ernest Hemingway (1899–1961), Mailer described (in language that offended many) the war and the inner conflicts of American fighting men. Mailer insisted that The Naked and the Dead (1948) was not written about a specific war but of "death and man's creative urge, fate, man's desire to conquer the elements." The work was a popular success and won him critical praise.

After attending the Sorbonne in Paris, France (part of the University of Paris), Mailer returned to the United States in the mid-1950s and helped found the New York newspaper the Village Voice. His next novel, Barbary Shore (1951), is set in a Brooklyn rooming house and contains complaints about the government of the United States. The Deer Park (1955), both the novel and the play Mailer adapted it from, focuses on two of Mailer's most memorable characters, Sergius O'Shaugnessy, former Air Force pilot, and Elena Esposito, broken-down dancer and actress. An American Dream (1965) shows Steve Rojack, trapped in an urban (city-based) nightmare of sex, murder, and despair, escaping with what remains of his soul to the jungles of Yucatán, Mexico. Why Are We in Vietnam? (1967), one of Mailer's least popular works, takes its eighteen-year-old hero on an Alaskan hunting trip that ends with his initiation into manhood. These books voiced Mailer's view of the problems that lay beneath the surface of American life.

Mailer began a second career in the mid-1950s as an essayist and journalist. He became a national personality with the publication of Advertisements for Myself (1959), a collection of earlier writings that included bitter attacks, personal interviews, cultural essays, stories, works in progress, and confessions of how Mailer reached the depths of his own state and found a "new consciousness" (awareness).

Although the 1960s were a time of personal conflict and public rebellion for Mailer, he wrote many works during that period that helped establish him as a leading writer of nonfiction. The Presidential Papers (1963) presented criticism of American politics and society that introduced a new Mailer, a public historian of the years when John F. Kennedy (1917–1963) was president. This work, along with Cannibals and Christians (1966), attempted to establish him as "self-appointed master of the Now." The Prisoner of Sex (1971) contained a discussion of Mailer's various sexual relationships.

The peace march on Washington, D.C., in 1967 and the presidential conventions of 1968 gave Mailer some of his best material. Mailer, a skilled reporter, turned his notes into "non-fictional novels" using the style of New Journalism, in which real events are described with the addition of writing devices such as narrative, dialogue, and multiple points of view. The Washington experience became The Armies of the Night: History as a Novel, the Novel as History (1968), for which Mailer received a National Book Award and a Pulitzer Prize. The political conventions shaped Miami and the Siege of Chicago (1968). These works reflect Mailer's personality and controversial (causing dispute) opinions on historic events, creating sharp descriptions of the conflict between individual and collective power. Other works using New Journalism methods include Of a Fire on the Moon (1971), The Executioner's Song (1979), and Harlot's Ghost (1991).

In the late 1970s Mailer began receiving letters from a prisoner named Jack Henry Abbott, whom Mailer began to consider a promising writer. Mailer helped Abbott publish a book of letters, In the Belly of the Beast (1981), wrote the book's introduction, and spoke up on behalf of Abbott, helping him get released from prison in 1981. Two weeks later Abbott stabbed a man to death and went back to prison. Mailer was criticized for not recognizing Abbott's violent nature. (Abbott killed himself in prison in 2002.)

In 1987 Mailer directed his first film, Tough Guys Don't Dance. During the 1990s Mailer again turned his attention to biographical essays and novels. Portrait of Picasso As A Young Man (1995) and Oswald's Tale: An American Mystery (1995) received poor reviews. Many critics felt that Mailer had used questionable new sources for subjects whose lives had already been examined. Among the theories Mailer presents is that violence and death are at the heart of Pablo Picasso's (1881–1973) Cubism (art based on geometry, or the study of points, lines, and surfaces) period.

Not one to avoid challenging subjects, Mailer chose to write a novel about Jesus Christ in 1997. As noted in the New York Times Book Review, Mailer wrote not merely of Jesus's life, but a modern-day Gospel, The Gospel According to the Son, using the voice of Jesus Himself—a choice avoided by all surviving ancient Gospels and by almost all modern novelists. Still, as in many of his other works, critics pointed to "rare powerful moments of invention" and gave Mailer credit for his knowledge of religious texts.

Mailer continued observing and commenting on major social and political issues throughout the 1990s, often interviewing people whose ideas opposed his, such as the conservative (preferring traditions and opposed to change) politician and newscaster Patrick Buchanan (1938–). In 2002 Mailer appeared as Ernest Hemingway in several performances of a dramatic reading called "Zelda, Scott, and Ernest," based on the friendship among Hemingway, the writer F. Scott Fitzgerald (1896–1940), and Fitzgerald's wife Zelda. "It's as close as I'll ever get to Hemingway," Mailer told the Washington Post.