Singer, dancer, and actress Madonna is a sensational self-promoter who drove herself to stardom on the pop music charts, in concert halls, on film, and in music videos. 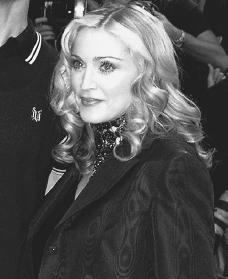 Madonna.
Reproduced by permission of the
Corbis Corporation
.
was the third of six children in a Catholic family. Her father Sylvio, also known as Tony, was a design engineer for Chrysler/General Dynamics. Madonna's mother was of French Canadian descent. She died of breast cancer when Madonna was five years old. Tony Ciccone moved the family to Pontiac, Michigan, and he married one of the women hired to care for the Ciccone household. The adjustment was difficult for Madonna as the eldest daughter. She had considered herself the "lady of the house" and had received much of her father's affection and attention.

Madonna acted in school plays in her early school years. As a teenager she discovered her love and talent for dancing, an activity she pursued under the direction and leadership of Christopher Flynn, her private ballet instructor. Madonna worked hard and played hard as well, something Flynn made easy by introducing her to the disco nightlife of Detroit, Michigan. Still, she cared for her younger brothers and sisters and worked hard in school. She graduated early from high school and was awarded a dance scholarship to the University of Michigan. She stayed two years before going to New York City in 1978 with thirty-seven dollars and a wealth of determination and ambition.

Madonna moved into an apartment in New York City's East Village, a poorer neighborhood filled with crime and drug problems. Her first jobs included figure modeling for artists and acting in low-budget movies. She danced briefly with the Alvin Ailey American Dance Theater and studied for a time with choreographer (one who creates and arranges dance performances) Pearl Lang before going to Paris, France, as a singer and dancer with French disco artist Patrick Hernandez. Madonna had developed a fascination with music. She played drums and sang backup in several small bands. When she returned to New York she wrote and recorded songs and hung out in popular Manhattan nightclubs. She was signed to a recording contract with Sire Records in October 1982.

The album Madonna was released in July 1983. Repeat club performances and radio airplay of several cuts from the album eventually earned her three huge hits with "Holiday," "Lucky Star," and "Borderline." A series of hit songs, videos, concert tours, and films followed. A brief performance in the film Vision Quest resulted in the top-five hit "Crazy for You." Her second album, Like a Virgin, released in 1984, produced two number one hits—the title track and "Material Girl." In early 1985 she went on her first concert tour, which was so successful that she had to switch to larger locations to meet the demand for tickets. Thousands of teenage girls all over the country began tying lace bows on top of their heads, wearing underwear as outerwear, and walking the halls of schools and shopping malls as "Madonna wannabees." Madonna's appearance in the film Desperately Seeking Susan in 1985 led to another popular single and video, "In the Groove."

Madonna married actor Sean Penn in 1985. In 1986 she released her third album, True Blue, from which three singles topped the charts: "Papa Don't Preach," "True Blue," and "Live to Tell," which also appeared in At Close Range, a film starring Penn. In 1987 a movie starring Madonna called Who's That Girl was largely ignored, but the accompanying soundtrack and concert tour were successful.

The release of Madonna's album Like A Prayer (1989) came at the same time as the breakup of her marriage. The video of the title song, showing Madonna confessing to a priest and then engaging in suggestive behavior with him, caused a stir in the Catholic Church. The controversy (dispute) resulted in a disagreement over a five million dollar endorsement (paid public support of a company's products) contract with the Pepsi company. Controversy again surrounded Madonna in 1990 when the music video channel MTV refused to play the racy video for "Justify My Love," a new track from her greatest hits album The Immaculate Collection, before 11:00 P.M.

Other films featuring Madonna include Shanghai Surprise (1986), in which she co-starred with then-husband Sean Penn; Dick Tracy (1989), which was accompanied by a soundtrack of Madonna songs; and Truth or Dare, a feature-length collection of footage from her Blonde Ambition Tour of 1990–91. Madonna also appeared in A League of Their Own (1992) and Body of Evidence (1993). Each work kept the press and critics focused on her.

By 1992 Madonna's popularity stretched across the world, and she had established herself as a sharp, confident businesswoman. She signed a sixty million dollar contract with Time-Warner, which included her own record company (under the Maverick label) and called for her to make videos, films, books, merchandise, and more than six albums. The announcement of the deal was timed with the release of the album Erotica, an extended video, and an adults-only picture book called Sex, featuring black-and-white photographs in which Madonna appears mostly without clothes with everything from men and women (in all combinations, positions, and numbers) to chairs, dogs, and slices of pizza. She was even shown hitchhiking wearing nothing but high heels. The book was a best-seller across the country.

The 1994 release of Bedtime Stories, written mainly by Madonna, showed her with a softer image and more soulful sound. In the mid-1990s she set her sights on playing the leading role in Andrew Lloyd Webber's (1948–) movie musical Evita, and after repeated tryouts, she convinced producers that she would bring a unique understanding to the lead role of Argentine leader Eva Peron (1919–1952). In her personal life, Madonna settled into a relationship with Carlos Leon, a personal trainer. In 1995 she released her second greatest hits album, Something to Remember.

In 1996 Madonna gave birth to a girl named Lourdes Maria Ciccone Leon (Lola for short). Madonna described the event to People magazine as "the greatest miracle of my life." She even traded in her pink Hollywood mansion for a home in a low-key suburb of Los Angeles, California. Meanwhile, her determination to play the starring role in Evita paid off, although her performance received mixed reviews. In 1997 the song "You Must Love Me" from the film's soundtrack won the Academy Award for best song.

In 1998 Madonna released Ray of Light. The album reflected her study of the kabbalah (an ancient Jewish teaching) and interest in Far East Indian culture. Its electronic influence also kept Madonna in touch with modern dance culture, proving to critics that she still knew how to stay ahead of the pack. The album received rave reviews and was one of her best-selling records. It also won Grammy Awards for best dance recording, best pop album, and best music video (short form).

That next year, Madonna contributed the single "Beautiful Stranger" to the Austin Powers: The Spy Who Shagged Me soundtrack. The single won a Grammy Award for best song written for a motion picture, television or other visual media. Madonna co-starred in the film The Next Best Thing in 2000. While the film got poor reviews, the soundtrack did moderately well. It contained two new Madonna songs, "American Pie" (a remake of the Don McLean classic) and "Time Stood Still." It was Madonna's first record for which she was the executive producer.

In August 2000 Madonna gave birth to a son named Rocco. The child was her son with British film director Guy Ritchie. Shortly after that event, Madonna released Music, which carried on the electronic element she introduced in Ray of Light. The album received mostly good reviews. In December 2000 Madonna and Ritchie had their son baptized in a thirteenth-century cathedral in Dornoch, Scotland. The next day, Madonna and Ritchie were married at Scotland's nineteenth-century Skibo Castle.

Madonna, the Material Girl turned serious actress, singer, songwriter and mom, appears to have it all. She accepts it all—including the constant media attention—with calm, as if she were planning the next phase. She told Time magazine, "I never wish I had a different life. I am lucky to be in the position of power that I am in and to be intelligent.… It's not my nature to just kick back."

Sexton, Adam. Desperately Seeking Madonna: In Search of the Meaning of the World's Most Famous Woman. New York: Delta, 1993.