The German reformer (one who works to change outdated practices and beliefs) Martin Luther was the first and greatest figure in the sixteenth-century Reformation. An author of commentaries on Scripture (sacred writings), theology (the study of religion), and priestly abuses, a hymnologist (writer of hymns [sacred songs]), and a preacher, from his own time to the present he has been a symbol of Protestantism (group of Christian faiths that do not believe in the supremacy of the pope, but in the absolute authority of the Bible).

Martin Luther was born at Eisleben in Saxony, Germany, on November 10, 1483, the son of Hans and Margaret Luther. Luther's parents were peasants, but his father had worked hard to raise the family's status, first as a miner and later as the owner of several small mines, to become a small-scale businessman. In 1490 Martin was sent to the Latin school at Mansfeld, in 1497 to Magdeburg, and in 1498 to Eisenach. His early education was typical of late-fifteenth-century practice. To a young man in Martin's situation, the law and the church offered the only chance for a successful career. He chose to become a lawyer to increase the Luther family's success, which Hans had begun. Martin was enrolled at the University of Erfurt in 1501. He received a bachelor of arts degree in 1502 and a master of arts in 1505. In the same year he enrolled in the instructors of law, giving every sign of being a dutiful and, likely, a very successful, son.

Between 1503 and 1505, however, Martin experienced a religious crisis that would take him from the study of law forever. A dangerous accident in 1503, the death of a friend a little later, and Martin's own personal religious development had by 1505 changed his focus. Then, on July 2, 1505, returning to Erfurt after visiting home, Martin was caught in a severe thunderstorm and flung to the ground in terror; at that moment he vowed to become a monk if he survived. This episode changed the course of Luther's life. Two weeks later, against his father's wishes and to the dismay of his friends, Martin Luther entered the Reformed Congregation of the Eremetical Order of St. Augustine at Erfurt.

Life as a monk at Erfurt was difficult. Luther made his vows in 1506 and was ordained (officially given a religious position in the church) a priest in 1507. No longer in disagreement with his father, he was then selected for advanced theological study at the University of Erfurt.

In 1508 Luther was sent to the University of Wittenberg to lecture in arts. He was also preparing for his doctorate of theology while he taught. In 1510 Luther was sent to Rome, Italy, and in 1512 received his doctorate in theology. Then came the second significant turn in Luther's career: he was appointed professor of theology at Wittenberg. He was to teach throughout the rest of his life.

The doctrine of justification, taking shape in Luther's thought between 1515 and 1519, drew him further into theological thought as well as into certain positions of practical priestly life. The most famous of these is the controversy (causing opposing viewpoints) over indulgences. A person who committed a sin would buy an indulgence from the church to avoid punishment—especially punishment after death. In 1513 a great effort to distribute indulgences was proclaimed throughout Germany. In 1517 Luther posted the Ninety-Five Theses for an academic debate on indulgences on the door of the castle church at Wittenberg. This was the customary time and place to display such an article. They were given widespread fame and called to the attention of both theologians and the public.

News of Luther's theses spread, and in 1518 he was called before Cardinal Cajetan, the Roman Catholic representative at Augsburg, to deny his theses. Refusing to do so, Luther returned to Wittenberg, where, in the next year, he agreed to a debate with the theologian Johann Eck (1486–1543). The debate soon became a struggle between Eck and Luther in which Luther was driven by his opponent to taking even more radical theological positions, thus laying himself open to the charge of heresy (believing in something that opposes what is formally taught by the Church). By 1521 Eck secured a papal bull (decree) condemning Luther, and Luther was summoned to the Imperial Diet at Worms (meeting of the Holy Roman Empire held at Worms, Germany) in 1521 to answer the charges against him.

Luther came face to face with the power of the Roman Catholic Church and empire at Worms in 1521. He was led to a room in which his writings were piled on a table and ordered to disclaim them. He replied that he could not do this. Luther left Worms and was taken, for his own safety, to the castle of Wartburg, where he spent some months in privacy, beginning his great translation of the Bible into German and writing numerous essays.

In 1522 Luther returned to Wittenberg and continued the writing that would fill the rest of his life. In 1520 he had written three of his most famous tracts (written piece of propaganda, or material written with the intent of convincing people of a certain belief): To The Christian Nobility of the German Nation; On the Babylonian Captivity of the Church; and Of the Liberty of a Christian Man.

In 1525 Luther married Katherine von Bora, a nun who had left her convent. From 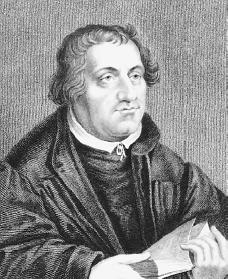 Martin Luther.
Courtesy of the
New York Public Library Picture Collection
.
that date until his death, Luther's family life became not only a model Christian home but a source of psychological support to him.

Luther's writings continued to flow steadily. Among the most important are the Great Catechism and the Small Catechism of 1529 and his collection of sermons and hymns, many of the latter, like Ein Feste Burg, still sung today.

In 1524–1525 Luther entered into a discussion of free will with the great Erasmus (1466–1536). Luther's On the Will in Bondage (1525) remained his final statement on the question. In 1528 he turned to the question of Christ's presence in the Eucharist (communion with God) in his Confession concerning the Lord's Supper.

In 1530 Luther supervised, although he did not entirely agree with, the writing of Philipp Melancthon's (1497–1560) Augsburg Confession, one of the foundations of later Protestant thought. From 1530 on Luther spent as much time arguing with other Reformation leaders on matters of theology as with his Catholic opponents.

In 1539 Luther wrote his On Councils and Churches and witnessed in the following years the failure of German attempts to heal the wounds of Christianity. In the 1540s Luther was stricken with disease a number of times, drawing great comfort from his family and from the devotional exercises that he had written for children. In 1546 he was called from a sickbed to settle the disputes of two German noblemen. On the return trip he fell ill and died at Eisleben, the town of his birth, on February 18, 1546.

i have learned something in this topic..thank you soo much..