The English surgeon (doctor who performs operations) Joseph Lister discovered the antiseptic method, in which a germ-killing substance is applied to wounds during an operation. This represented the beginning of modern surgery (an operation to correct a disease or condition).

Joseph Lister was born in Upton, Essex, England, on April 5, 1827, the fourth of Joseph Jackson Lister and Isabella Harris Lister's seven children. His father was a wealthy wine merchant and student of Latin and mathematics who also developed an achromatic (possessing no color) lens for the microscope. As a child Lister studied fish and small animals. He also did microscopic research, and his later acceptance of Louis Pasteur's (1822–1895) work may be related to his understanding of the process of fermentation (the chemical breakdown of a compound) in relation to the making of wine.

Lister knew at a young age that he wanted to be a surgeon, but his father made sure he completed his formal education first, just in case. As a teenager Lister attended schools at Hitchin and Tottenham, England, studying mathematics, natural science, and languages. In 1844 he entered University College in London, England, to study medicine. After graduating in 1852, he began a surgical career in Edinburgh, Scotland. In 1860 he became professor of surgery at the Royal Infirmary in Glasgow, Scotland.

With the introduction of anesthesia (something that causes a patient to lose sensation in a certain area of the body or the entire body) in the 1840s, operations had become more common. Except, many patients died from infection following surgery. Inflammation (swelling) and suppuration (pus formation) occurred in almost all accidental wounds after surgery, and more so when patients were treated at the hospital rather than at home by a visiting surgeon. The reason was unknown, but it was believed to be something in the air. As a result wounds were heavily dressed or washed with water to keep the air out; operations were a last resort. The head, chest, and stomach were almost never opened, and injured limbs were usually amputated (cut off). 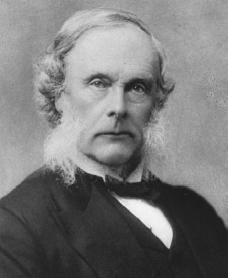 Joseph Lister.
Courtesy of the
Library of Congress
.

Lister's research centered on the microscopic changes in tissue that result in inflammation. When he read Pasteur's work on germs in 1864, Lister immediately applied Pasteur's thinking to the problem he was investigating. He concluded that inflammation was the result of germs entering and developing in the wound. Since Pasteur's solution of killing germs with heat could not be applied to the living body, Lister decided to try a chemical to destroy the germs.

That same year Lister read in the newspaper that the treatment of sewage (liquid waste matter from sewers) with a chemical called carbolic acid had led to a reduction of diseases among the people of Carlisle, England, and among the cattle grazing on sewage-treated fields. In 1865 he developed a successful method of applying carbolic acid to wounds. The technique of spraying the air in the operating room with carbolic acid was used only briefly, as it was recognized that germs in the air were not the main problem. Lister perfected the details of the antiseptic method and continued his research. He developed the surgical use of a sterile (germ-free) thread for closing wounds and introduced gauze dressings. Antisepsis became a basic principle for the development of surgery. Amputations became less frequent, as did death from infections. Now new operations could be planned and executed safely.

In 1869 Lister returned to Edinburgh, and in 1877 he was appointed professor of surgery at King's College in London, England. He won worldwide acclaim, honors, and honorary (received without fulfilling the usual requirements) doctorates and was made a baron in 1897. After he retired from medicine in 1893 he became foreign secretary of the Royal Society (Great Britain's oldest organization of scientists), and he was its president from 1895 to 1900. He died at Walmer, Kent, England, on February 10, 1912. Although Lister's antiseptic method was soon replaced by the use of asepsis (keeping the site of the operation and the instruments used free from germs), his work represented the first successful application of Pasteur's theory to surgery and marked the beginning of a new era.