Charles F. Kettering, first as an independent inventor and later as head of research for General Motors Corporation, conducted research that established him as one of the most creative Americans of his generation.

Charles Francis Kettering was born on August 29, 1876, on a farm near Loudonville, Ohio, to Jacob and Martha Hunter Kettering. He was the fourth of five children. He was an excellent student who loved to read, and he also showed an early interest in trying to find better ways of doing things. His brother Adam, in Stuart W. Leslie's Boss Kettering, describes how young Charles tried "half the tools on the farm" to find the best way to pick potatoes. After high school graduation Kettering taught three years in country and small-town schools to make money to pay for college. Entering Ohio State University at age twenty-two, he dropped out in his sophomore year because of poor eyesight. Kettering worked for two years as a telephone lineman and then returned to Ohio State, graduating at age twenty-eight.

The NCR and Delco era

After Kettering received his degree he took a job as an experimental engineer with National Cash Register Company (NCR) in Dayton, Ohio. During his five years there he created a low-cost printing cash register; created an electric cash register, doing away with the hand crank; developed a system that tied charge phones to cash registers; and developed an accounting machine for banks. In 1905 he married Olive Williams of Ashland, Ohio. The couple had one son.

Having developed a better ignition (starting) system for autos while working "on the side" for NCR, Kettering, with the help of NCR's general manager Colonel Edward A. Deeds and others who put up money, organized Dayton Engineering Laboratories Company (Delco) in 1909. That year an order from Cadillac for eight thousand ignition systems led to the creation of an electric starter, first offered on Cadillac cars in 1912 and on many other makes the following year. Kettering and Delco also improved auto lighting systems and developed a dependable way to generate electricity on farms. Delco grew into a large manufacturing firm as well as a research site.

In 1915 Colonel Deeds, a good man with business details, joined Delco, teaming up with Kettering, who preferred to devote himself to research. In 1916 Delco, in exchange for $9 million, became a branch of United Motors Corporation, an automotive parts and accessories (objects adding to the appearance or performance of something) company. In turn, General Motors (GM) acquired United Motors in 1918. Kettering was invited to organize and direct the new General Motors Research Corporation, based in Dayton at the inventor's request. By 1925 the research labs had been transferred to Detroit, Michigan; Kettering and his wife lived in a hotel in the city until Kettering's retirement.

As head of GM research for 27 years, Kettering helped bring about the improvement of many products, acquiring 140 patents in his name. His most notable achievements included the development of "Ethyl" leaded gasoline to correct engine 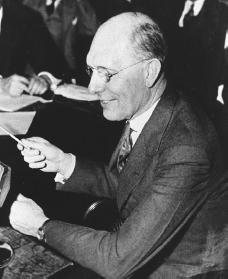 Charles F. Kettering.
Courtesy of the
Library of Congress
.
knock; the refrigerant (cooling agent) "Freon"; and faster-drying and longer-lasting finishes for automobiles. He also created the lightweight diesel engine, which helped improve the moving power of railroads.

Kettering, in addition to his success as a scientist and engineer, was highly regarded as a public speaker and social philosopher (seeker of wisdom). "I am for the double-profit system," he said, "a reasonable profit for the manufacturer and a much greater profit for the customer." "I object to people running down the future," he also remarked. "I am going to live all the rest of my life there, and I would like it to be a nice place, polished, bright, glistening, and glorious." Kettering always regarded himself as a professional amateur. "We are amateurs," he observed, "because we are doing things for the first time."

Kettering retired from GM in 1947 but continued to serve as a director and research adviser until his death in Dayton on November 25, 1958. He received more than three dozen honorary (achieved without meeting the usual requirements) doctor's degrees and dozens of awards, honors, and medals. His name lives on in the Charles F. Kettering Foundation, which he organized for medical research in 1927, and the Sloan-Kettering Institute for Cancer Research, founded by GM chairman Alfred P. Sloan Jr. in 1945.

According to family history and remembrances his middle name should be Franklin not Francis.
This name was used frequently in the Kettering families' geneology.
Also, the name was originally Kettenring but the "n" got removed somewhere, somehow.
Just another note from family history as I have been taught and learned it.