The German astronomer Johannes Kepler's discovery of three basic laws governing the motion of planets made him one of the chief founders of modern astronomy (the study of the universe and its stars and planets).

Johannes Kepler was born on December 27, 1571, in Weil, Germany. He was the son of Heinrich and Katharina Guldenmann Kepler. His father was a mercenary (a soldier serving only for money). Although a member of the Protestant faith, his father helped put down a Protestant uprising in the Low Countries (Belgium, Holland, and Luxembourg). Kepler's parents allowed him to watch the great comet of 1577 and an eclipse (passing into shadow) of the Moon. Kepler was a sickly child but an excellent student. At thirteen he entered a religious training school at Adelberg, Germany.

Following Kepler's graduation from the University of Tübingen in 1591, he became interested in astronomy, particularly the theories of Nicolaus Copernicus (1473–1543), who stated that the Earth moved around the Sun in a circle. The University of Tübingen recommended Kepler for the post of the "mathematician of the province" in Graz, Austria. He arrived there in 1594 and began composition of the almanac, in which the major events of the coming year were predicted. His first almanac was a success. The occurrence of two events that he had predicted, an invasion by the Turks and a severe winter, established his reputation. In 1597 Kepler married Barbara Muehleck. Of their five children only one boy and one girl reached adulthood.

Kepler sought the job of assistant to Tycho Brahe (1546–1601), astrologer (one who interprets the positions of stars and planets and their effect on human affairs) and mathematician to Rudolph II (1552–1612), in Prague, Czechoslovakia. Kepler took his new position in 1600. When Brahe died the following year, Kepler was appointed to replace him. His first job was to prepare Brahe's collection of studies in astronomy for publication, which came out between 1601 and 1602.

Kepler was also left in charge of Brahe's records, which forced him to make an 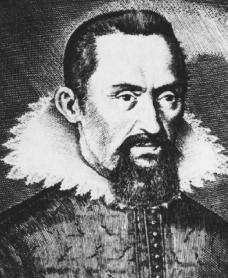 Johannes Kepler.
assumption that led to a new theory about the orbits of all the planets. A difference between his theory and Brahe's data could be explained only if the orbit of Mars was not circular but elliptical (oval-shaped). This meant that the orbits of all planets were elliptical (Kepler's first law). This helped prove another of his statements. It is known as Kepler's second law, according to which the line joining a planet to the sun sweeps over equal areas in equal times in its elliptical orbit.

Kepler published these laws in his discussion of the orbit of the planet Mars, the Astronomia nova (1609). The two laws were clearly spelled out in the book's table of contents. They must have been seen by any careful reader alert enough to recognize a new idea of such importance. Still, the Italian astronomer Galileo Galilei (1564–1642) failed to use the laws in his printed works—although they would have helped his defense of Copernicus's ideas.

New jobs and the third law

In 1611 Rudolph II stepped down from the throne, and Kepler immediately looked for a new job. He obtained the post of province mathematician of Linz, Austria. By the time he moved there in 1612 with his two children, his wife and his favorite son, Friedrich, were dead. Kepler's fourteen years in Linz were marked by his second marriage to Susan Reuttinger, and by his repeated efforts to save his mother from being tried as a witch.

Kepler also published two important works while in Linz. In the Harmonice mundi (1618) his third law was announced. It stated that the average distance of a planet from the sun, raised to the third power, divided by the square of the time it takes for the planet to complete one orbit, is the same for all planets. Kepler believed that nature followed numeric relationships since God created it according to "weight, measure and number." Kepler used the same idea in describing geometry (the study of points, lines, angles, and surfaces). Kepler's second work, the Epitome astronomiae Copernicanae (published 1618–21), proposed a physical explanation of the motions of planets, namely, "magnetic arms" extending from the sun.

Kepler wandered over Europe in the last three years of his life. He was in Ulm, Germany, when his Tabulae Rudolphinae (1628) was published. It not only added the positions of over two hundred stars to those contained in Brahe's published works, but it also provided planetary tables that became the standard for the next century. Kepler died on November 15, 1630. He was a unique symbol of the change over from the old to the new spirit of science.