Robert Kennedy was a U.S. senator and the attorney general in the presidential administration of his brother John F. Kennedy (1917–1963). Like his brother, Robert was extremely charming and a popular political figure during the 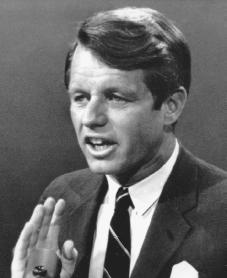 Robert Kennedy.
Courtesy of the
National Archives and Records Administration
.
1960s. Tragically, much like his brother before him, Robert's assassination would leave behind many questions as to what could have been.

Early life as a Kennedy

Robert Francis Kennedy was born on November 20, 1925, in Brookline, Massachusetts, to Joseph (1888–1969) and Rose (1890–1995) Kennedy. Robert enjoyed a privileged childhood and was surrounded by a loving and powerful family. Rose's father was the mayor of Boston. Joseph was a wealthy businessman and would later become U.S. ambassador, or official representative, to Great Britain.

Kennedy's childhood was greatly shaped by his father's values. Joseph Sr. always wanted his children to try their hardest, no matter what they were doing. The Kennedys raised their children as Roman Catholics, and Robert was very religious throughout his young life and served as an altar boy. The seventh of nine children born to the Kennedys, Robert constantly sought the attention of his two older brothers, Joseph P. Kennedy Jr. (1915–1944) and John F. Kennedy. Although slightly smaller than his brothers, Robert would develop the good looks and charm that would help the Kennedys win over the American public.

The Kennedys lived in England during his father's ambassadorship and the family quickly became a favorite with the English press. In 1939, with the threat of war hanging over Europe, Joseph Kennedy sent his family back to America, fearing for their safety.

Robert graduated from Milton Academy before entering Harvard. His college career was interrupted by the outbreak of World War II (1939–45), in which the United States led the Allied forces against Germany, Japan, and Italy. After his oldest brother, Joseph, was killed in combat, Robert joined the navy and was assigned as a lieutenant. Later, he was assigned to the destroyer Joseph P. Kennedy Jr., which was named in honor of his brother.

In 1946 he returned to Harvard, where he played football, and he graduated in 1948. He then earned his law degree from the University of Virginia Law School and was admitted to the Massachusetts bar (an association for lawyers) in 1951. While at school he met Ethel Skakel (1928–), his sister's college roommate. Robert and Ethel were married in June 1950. They would have eleven children together (the last one was born six months after Kennedy's death).

In 1951 Kennedy joined the Criminal Division of the U.S. Department of Justice. He resigned the following year to run John F. Kennedy's successful campaign for U.S. senator. In 1953 Robert was appointed one of fifteen assistant counsels, or advisors, to the Senate Subcommittee on Investigations under Senator Joseph McCarthy (1908–1957). At the time, McCarthy was leading a nationwide "witch-hunt" for Communists, or people who believe in a political system in which property and goods are owned by the government. McCarthy's movement gained momentum through America's fear of Communists living in the country. But later that year, Kennedy resigned when Democratic members of this subcommittee walked out in protest against McCarthy's forceful methods of investigation.

Kennedy rejoined the Senate's permanent Subcommittee on Investigations as chief counsel for the Democratic minority in 1954. The following year, when the Democrats reorganized this committee under Senator George McClellan, Kennedy became chief counsel and staff director. That year the U.S. Junior Chamber of Commerce elected him one of "ten outstanding young men." In 1955, at his own expense, Kennedy joined Supreme Court Justice William O. Douglas (1898–1980) on a tour of several Soviet republics. (The republics were Communist states that made up the Soviet Union.)

Kennedy became chief counsel to the Senate Select Committee on Improper Activities in the Labor or Management Field organized under McClellan in 1957. His major accomplishment was the investigation of corruption, or dishonest activity, in the International Brotherhood of Teamsters, a powerful labor union. The hearings became front-page news, especially Kennedy's prosecution of the union's president, James Hoffa (1913–c.1975). Some union leaders believed these hearings were more like persecution, or a public harassment, of Hoffa. Later, Kennedy was also responsible for several additional investigations of labor and management abuses.

A Kennedy in the White House

In 1960 Kennedy managed his brother's successful presidential campaign. When John appointed Robert U.S. attorney general, many cried nepotism, the act of favoring family members. But Robert's role in his brother's cabinet was unique, and he was virtually the president's other self. Shoulder to shoulder, the brothers stood together. The Kennedy administration carefully waded through civil rights cases, the growing Vietnam War (1955–75; a civil war in which U.S. forces helped South Vietnam fight against a takeover by Communist forces from North Vietnam), and the Cuban missile crisis, when the nation held its breath as the president narrowly avoided conflict with Communist Cuba and the Soviet Union.

Tragically, the partnership would not last. John F. Kennedy was killed by an assassin's bullet in Dallas, Texas, in 1963. Distressed by the loss of his brother, Robert soon resigned from the administration of President Lyndon Johnson (1908–1973). Kennedy ran successfully for New York State senator in 1964. Many wondered why Kennedy chose to run in New York instead of his native Virginia. Kennedy was thinking of the presidency by now, and Virginia was no power base. As a senator Kennedy achieved a splendid record, and his popularity began to grow and rival that of his brother's.

Presidential candidate and a tragic ending

Kennedy leaped into the presidential race in 1968. He was the perfect candidate to oppose Eugene McCarthy (1916–). Kennedy's entrance bitterly divided liberal Democrats (those in favor of change). Kennedy won the support of activists as he had come to sympathize with the African Americans' drive for "black power." He could reach and unite young people, activists, African Americans, and blue-collar Roman Catholics. Meanwhile, the white South hated him, big business distrusted him, and middle-class, reform Democrats were generally suspicious of him. Just after midnight on June 5, 1968, Kennedy was gunned down by an assassin. He died a day later.

Robert Kennedy's tragic death robbed the nation of one of its most dedicated and popular politicians. For most of his life, Kennedy fought for equal rights, improving education, housing the poor, and many other issues of the day. Robert had been no copy of his brother John. In some ways he was more intense and more committed than his brother had been. Yet he shared John's personal philosophy that one man could make a difference.

Palermo, Joseph A. In His Own Right: The Political Odyssey of Senator Robert F. Kennedy. New York: Columbia University Press, 2001.

wonderful article, its also easy to read and gets to the point quickly.