Edward Moore Kennedy was born in Brookline, Massachusetts, on February 22, 1932, fourth son and last of nine children of Joseph P. (1888–1969) and Rose Fitzgerald (1890–1995) Kennedy. His father was a multimillionaire businessman. Because his family moved frequently, Kennedy attended several different private schools before enrolling in Milton Academy, near Boston, Massachusetts, in 1946. Upon graduation from Milton in 1950 he enrolled at Harvard University. At the end of his freshman year, however, he was expelled for having another student take a Spanish exam in his place. Kennedy then enlisted for a two-year term in the army. His father's influence won him an assignment as a guard to Supreme Headquarters Allied Powers, Europe (SHAPE) in Paris.

After completing his time in the army, Kennedy returned to Harvard and graduated in 1956. He then enrolled in the University of Virginia Law School, where his natural talent for debate was sharpened. He received his law degree in 1959 and was admitted to practice in Massachusetts in the same year. In November 1958 Kennedy married Virginia Joan Bennett; they had three children.

While still a law student Edward Kennedy managed the successful Senate reelection campaign in Massachusetts of his brother John Kennedy. In 1960 he served as Western states coordinator for John's campaign for the Democratic presidential nomination. After his brother's victory in the 1960 election, Edward took a position as assistant to the district attorney of Suffolk County, Massachusetts. As preparation for running in 1962 for the remainder of John's unfinished Senate term, Edward traveled widely and made many speeches.

At the age of thirty, Kennedy easily won election to the Senate in 1962 over Republican George Cabot Lodge (1927–). Kennedy's slogan was: "I can do more for Massachusetts." As a junior legislator, Kennedy spent most of his time watching and learning from his Senate seniors, surprising some 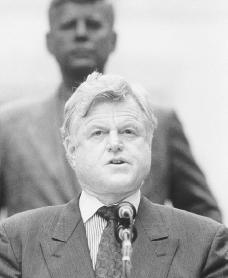 Edward Kennedy.
Reproduced by permission of the
Corbis Corporation
.
observers who expected him to be more aggressive. A year after John Kennedy's 1963 assassination, Edward won election to his first full Senate term.

By 1967 Kennedy began to speak out against the Vietnam War (1955–75), a civil war in which U.S. forces helped South Vietnam fight against a takeover by Communist forces from North Vietnam. Kennedy focused mainly on the need for draft reform and the U.S. failure to provide for the Vietnamese war victims. After visiting South Vietnam in early 1968 he became even more critical, yet he managed to stay on good terms with the administration of President Lyndon Johnson (1908–1973). Kennedy's life was strongly affected by the assassination of his brother Robert (1925–1968) in June 1968. After a period of withdrawal, he became more vocal in criticizing the Vietnam War and in pressing for selected social reforms. Though he denied interest in seeking the 1968 Democratic nomination, his actions clearly established him as heir to the "Kennedy legacy," and many expected that he would one day run for the presidency.

The year 1969 began well for Kennedy, with his election as Senate majority whip (assistant leader) in January. Six months later, however, his career and reputation suffered a huge blow when, following a party, he drove his car off a narrow bridge on Chappaquiddick Island, near Massachusetts, resulting in the drowning of his companion, Mary Jo Kopechne (1940–1969). Kennedy's failure to report the accident for nearly nine hours was harshly condemned by press and public alike. In a televised speech a week later he asked the voters to advise him as to whether he should remain in office. The response was positive, as was the local court's verdict: Kennedy's sentence—for leaving the scene of an accident—was suspended.

Rumors about what really happened at Chappaquiddick did not burden him in the Senate. He was an outspoken critic of the administration of President Richard Nixon (1913–1994), opposing Nixon's antiballistic missile (ABM; a free-falling nuclear missile) installment proposal, backing various measures to end the Vietnam War, and leading the fight to lower the voting age to eighteen. Kennedy won an easy reelection in 1970, however, he lost his majority whip post by a close vote in 1971. Freed from the responsibilities of his formal leadership post, he resumed his outspoken opposition to the Nixon administration with more energy than ever.

Many suspected that Kennedy would run for president in 1972, but he again denied any such ambitions. He refused the vice presidential nomination offered by Democratic nominee George McGovern (1922–). He turned his attention to other issues, such as handgun control and national health insurance. His 1972 book, In Critical Condition, was a sweeping criticism of the U.S. health care industry. In 1976 Kennedy announced again that he would not run for president even though polls showed that many people supported him. He continued to win reelection to the Senate and became chairman of its Judiciary Committee. He also loyally backed the Democratic foreign-policy programs of President Jimmy Carter (1924–).

Kennedy again emerged as the favorite in public opinion polls regarding the 1980 presidential nomination although he denied interest in the position. Finally yielding to temptation, he announced in November 1979 that he would challenge Carter for the nomination. However, his candidacy began miserably when he performed poorly in a televised interview (which revived the "Chappaquiddick issue"). The Iranian hostage crisis (an incident in which fifty-two Americans were held captive at the U.S. embassy in Iran by student protesters) and the Russian invasion of Afghanistan increased public support for Carter, at least temporarily. Carter locked up the Democratic nomination well before the party convention had even begun. Kennedy, however, dominated the convention itself with one of his most stirring speeches.

A leader on national issues

When the Republicans gained control of the Senate in 1981, Kennedy lost his Judiciary Committee chairmanship and once again focused his energies mainly on social programs and labor issues. Kennedy emerged as an influential and constant critic of the domestic and foreign policies of President Ronald Reagan (1911–). In late 1982 Kennedy removed himself from competition for his party's presidential nomination. He remained committed to an expanded federal role in pursuit of social and economic justice, yet he showed that he was clearly capable of sensible cost cutting when necessary.

Kennedy continues to work in the Senate to benefit the people of Massachusetts and the nation. He was an author of the 1996 Health Insurance and Portability Act, which allowed those who change or lose their job to maintain health insurance, and the 1997 Children's Health Act, which increased access to health care for children age eighteen and under. To mark his contribution toward helping to fulfill the four essential freedoms for the world outlined by President Franklin Roosevelt (1882–1945) in 1941, Kennedy was given the 1999 Four Freedoms Award by the Franklin and Eleanor Roosevelt Institute.