H omer, the major figure in ancient Greek literature, has been considered the greatest poet of classical antiquity (ancient times). He wrote both the Iliad and the Odyssey, two epic poems (long narrative poems) surviving in a surprisingly large number of manuscripts.

It is not possible to supply a biography for Homer in the accepted sense of a life history. Since he lived before cultures began recording history, there is no authentic record of who he was, when and where he was born, how long he lived, or even if he was actually responsible for the two epic poems for which he is known.

It is arguable that in one incident of the Odyssey the poet may be giving a glimpse of himself in the disguise of a bard (singing poet), whom he calls Demodokos and whom he introduces to the court of the Phaeacian king, where the shipwrecked Odysseus is generously entertained. This Demodokos is described as a "divine singer to whom the god gave delight of singing whatever his soul prompted him." He is also described as being blind, which also supports the argument that Homer was portraying himself, because there was a belief that Homer was blind.

Evidence from the epics

This lack of any historical record of Homer's life leaves only what can be taken from the poems themselves. On this task many scholars have attempted to draw conclusions about Homer, often without acceptable results.

The setting of the Iliad is the plain of Troy (an ancient Greek city) and its immediate surroundings. Details of the land are so precise that it is not feasible to suppose that their author created them out of his imagination. To be sure, there is the objection that not all of the poem's action can be made to fit the present-day lands.

In the Odyssey the situation is in many respects quite different. The poet demonstrates that he knew the western Greek island of Ithaca (where the second half of the epic takes place) as well as the poet of the Iliad knew the plain of Troy. The Odyssey, however, also extends over many strange, distant lands, as Odysseus's homeward voyage from Troy to his native Ithaca is transformed into a bizarre sea-wandering adventure.

Perhaps misled by the accuracy with which the Trojan plain is described in the Iliad and the island of Ithaca is pictured in the Odyssey, various modern commentators have tried to impose the same realism on Odysseus's astonishing voyage, selecting actual sites in the western Mediterranean Sea for his adventures. The true situation must be that the Homer of the Odyssey had never visited that part of the ancient world, but he had instead listened to the stories of returning Ionian sailors who explored the western seas during the seventh century B.C.E.

That the author of the Iliad was not the same as the author of these fantastic tales in the Odyssey is arguable on several levels. The two epics belong to different literary types: the Iliad is essentially dramatic in its confrontation of opposing warriors who converse like the actors in a tragedy (a play with struggle and disappointment), while the Odyssey is cast as a novel narrated in more everyday human speech. In their physical structure, also, the two epics display an equally obvious difference: the Odyssey is composed in six distinct parts of four chapters ("books") each, whereas the Iliad moves unbrokenly forward in its tightly woven plot.

Readers who examine psychological qualities see in the two works some distinctly different human responses and behavioral attitudes. For example, the Iliad voices admiration for the beauty and speed of horses, while the Odyssey shows no interest in these animals. The Iliad dismisses dogs as mere 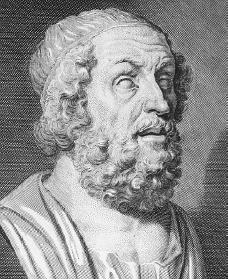 Homer.
Reproduced by permission of
Archive Photos, Inc.
scavengers, while the poet of the Odyssey reveals a modern sympathy for Odysseus's faithful old hound, Argos.

The strongest argument for separating the two poems is the chronology, or dating, of some of the facts in the pieces. In the Iliad the Phoenicians are praised as skilled craftsmen working in metal, and as weavers of elaborate, much-prized garments. In contrast, Greek feelings toward the Phoenicians have undergone a drastic change in the Odyssey. Although they are still regarded as clever craftsmen, the Phoenicians are also described as "tricksters," reflecting the invasion of Phoenecian commerce into Greek markets in the seventh century B.C.E.

One thing, however, is certain: both epics were created without writing sources. Between the decline of Mycenaean and the emergence of classical Greek civilizations—which is to say, from the late twelfth to the mid-eighth century B.C.E. —the inhabitants of the Greek lands had not yet acquired from the easternmost shore of the Mediterranean the familiarity with Phoenician alphabetic writing that would lead to classical Greek literacy (and in turn, Etruscan, Roman, and modern European literacy). Therefore it could be concluded that the epics must have been created either before the end of the eighth century B.C.E. or so shortly afterwards that the use of alphabetic writing had not yet been developed sufficiently to record long pieces of writing. It is this illiterate (unable to read or write) environment that explains the absence of all historical record of the author's two great epics.

It is probable that Homer's name was applied to two individuals differing in style and artistic accomplishment, born perhaps as much as a century apart, but practicing the same traditional craft of oral composition and recitation (to read out loud). Although each became known as "Homer," it may be (as one ancient source says) that "homros" was a word for a blind man and so came to be used generically to refer to the old and often sightless wandering reciters of heroic legends. Thus there could have been many Homers.

The two epics Homer is generally regarded as writing, however, have been as highly prized in modern as in ancient times for their vividness of expression, their keenness of personal characterization, and their lasting interest, whether in narration of action or in animated dramatic dialogue.

Later Greek times credited Homer with the composition of a group of comparatively short "hymns" (songs of praise) addressed to various gods, of which twenty-three have survived. With a closer look, however, only one or two of these, at most, can be the work of the poet of the two great epics. The epic "The Battle of the Frogs and Mice" has been preserved but adds nothing to Homer's reputation. Several other epic poems of considerable length— The Cypria, The Little Iliad, The Phocais, The Thebais, and The Capture of Oichalia —were also credited to Homer in classical times.

The simple truth seems to be that the name Homer was not so much that of a single individual but an entire school of poets flourishing on the west coast of Asia Minor (today, the area of Turkey). Unfortunately, we will probably never know for sure, since during this period the art of writing had not been sufficiently developed by the Greeks to permit historical records to be compiled or literary compositions to be written down.

I like the writers honesty and quest for truth. His information is fresh in comparison to others I have read on Homer.The comments regarding the settings described by whoever wrote the two epics sheds new light on the debate of Homer's existence and authorship.


Thank Your for your information