American physician, teacher, and author Oliver Wendell Holmes contributed to the advancement of medicine and literature. He is also known for writing the famous poem "Old Ironsides."

Oliver Wendell Holmes was born in Cambridge, Massachusetts, on August 29, 1809, to a well-established New England family. His father, Abiel Holmes, was a reverend in the First Congregational Church. His mother, Sarah Wendell, daughter of a Boston merchant, came from a long line of Dutch ancestors who settled in New England. Although his father was a Calvinist (follower of John Calvin's study of religious faith, which strongly emphasized the supreme power of God and His foreknowledge of a believer's future) by training, he was very open to Christians of all faiths. He was a fair-minded man and a well-educated father, having a library of two-thousand books for his children to read. Oliver was the fourth of five Holmes' children, with three older sisters and one younger brother. Paul Bunyan's classic allegory (symbolic story) had a big impact on Oliver's lifetime religious views. He rejected many of the Calvinist ideas he was surrounded with in childhood, and this independence often leaned toward rebellion.

At age fifteen Oliver attended Phillips Andover Academy. He was instantly popular with his teachers his first year, when he translated Virgil's (70–19 B.C.E. ) Aeneid from Latin into English. It is possible that Oliver's father thought the Calvinist focus at Andover would make a minister out of Oliver, but Oliver later wrote in Life and Letters, "I might have been a minister myself, if a [certain] clergyman had not looked and talked so like an undertaker."

Holmes continued his studies at Harvard University in 1825, graduating in 1829. Harvard's strong Unitarian (church stressing individual freedom of belief) influences only strengthened Oliver's rejection of Calvinism. This first time at Harvard was when he began to enjoy writing. Publishing poems in Harvard's The Collegian and later in the New England Galaxy and Amateur gave him quite a bit of pleasure. His writing did not keep him from being social, as he had many friends and joined Phi Beta Kappa (an honor society made up of American college students and graduates who have excelled in liberal arts and sciences). Holmes's joy in life was evident with his possession of a fast horse and buggy and several rowboats at the ready. Holmes was also a fan of the racetrack and boxing rings.

After Holmes graduated from Harvard in 1829, he studied at the law school for a year, during which time he wrote the popular poem "Old Ironsides". His pencil-written poem was about the destruction of a once useful warship, the USS Constitution.

A year after the publication of "Old Iron-sides," Holmes started writing prose (literature 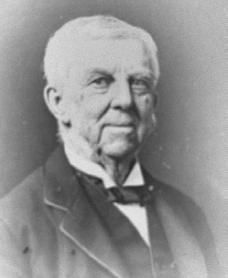 Oliver Wendell Holmes.
Courtesy of the
Library of Congress
.
different from poetry because of its irregular patterns and lack of rhyme) in the New England Magazine. This was a new publication and Holmes was an early contributor (one who writes for the magazine or newspaper), publishing "The Autocrat at the Breakfast Table" in the fifth month's copy. A year later he published another by the same title, and then five years later, in November 1857, he published an even longer version in the brand new Atlantic Monthly. He found the perfect place to express his very definite ideas in the pages of the Atlantic Monthly. In addition to these articles and his volumes of verse, he also wrote biographies: John L. Motley's (1814–1877) in 1879, and Ralph Waldo Emerson's (1803–1882) in 1885. Among his best-known poems are "The Deacon's Masterpiece," "The Last Leaf," "The Chambered Nautilus," "My Aunt," "The Moral Bully," and "Brother Jonathan's Lament for Sister Caroline."

In the same year of Holmes's writing success, he decided to give up law in favor of a career in medicine. He started at the Boston Medical College and finished up at Harvard Medical School. He rounded out his training with two years of study in Paris from 1833 to 1835. France was considered the medical center of the world. Holmes was honored to work under the surgeon Larrey, reported to be Napoleon's (1769–1821) favorite. Here he learned new techniques and approaches in medicine, reflected in two important early papers: "Homeopathy, and Its Kindred Delusions" in 1842, and "The Contagiousness of Puerperal Fever" (an unpredictable and often deadly difficulty of childbirth) in 1843. This was to be the medical work for which he is most remembered.

Holmes took his medical degree at Harvard in 1836. Although he began a general practice (active medical office) in Boston, it was his medical writings and teaching of anatomy that set Oliver Wendell Holmes apart. Nevertheless, Ralph Waldo Emerson encouraged his poetry. Due to the encouragement, Holmes published Poetry.

Continuing to balance both writing and medicine, in 1836 Holmes received the Boylston Prize from Harvard for a medical essay, as well as two more in 1837. From 1838 to 1840 he served as professor of anatomy at Dartmouth College. Despite his inability to travel widely in the United States due to his asthma, Holmes delivered many lectures on the topics of both science and literature. His medical writing often became lecture material that only added to his popularity as a scholar and a public figure. Of his lecturing style students said, "He enters, and is greeted by a mighty shout and stamp of applause." The other professors requested that Holmes teach the last of the five morning lectures, because they knew he could hold the students' attention even though they were tired.

Both Holmes's writings and his lectures showed an open-minded understanding that his readers and listeners were educated people and should be spoken to as such.

In 1840 Holmes married Amelia Lee Jackson, daughter of the Massachusetts Supreme Court justice, and returned to general practice. They had three children: Oliver Wendell Holmes, Jr., a future justice of the United States Supreme Court; a daughter, Amelia (the future Mrs. Turner Sargent); and Edward Jackson Holmes, a future Boston lawyer. In 1847 Oliver was appointed Parkman professor of anatomy and physiology at Harvard Medical School, where he served as dean from 1847 to 1853. Holmes remained at Harvard until 1882.

Holmes's hobbies included interest in photography and the study of the microscope. He is credited with the invention of the stereoscope (an instrument with two eyeglasses for helping the observer combine the images of two pictures to get the effect of depth). His writing showed just as much variety as his training and his hobbies. He even wrote several well-remembered hymns. He died at his house in Boston on October 7, 1894, just two months after his eighty-fifth birthday.

Even though he was rebellious against some of his childhood religious training, he maintained a healthy relationship with his God. He once wrote in a letter to a friend, "There is a little plant called Reverence in the corner of my soul's garden." As a scientist, teacher, lecturer, author, and poet, Holmes left his mark on his time period, and many honors came to him both at home and abroad.

National Reading Year
or some call it
Love to read Year ...