Writer and performer of folk songs, Woody Guthrie composed "This Land Is Your Land," a song many call an unofficial national anthem. His music, which celebrates the good in people, includes messages of unity and brotherly love and remains the anthem of the poor and broken.

Woodrow Wilson Guthrie was born on July 14, 1912, in Okemah, Oklahoma, the third of Charles and Nora Guthrie's five children. Guthrie's grandmother was one of the first schoolteachers in the county. His father was a professional guitarist and prizefighter who regularly encouraged physical fitness and wrestling. Guthrie's mother taught social awareness and folk music. His father's message was to never be bullied, while his mother's message was to try to see the world from the other person's perspective. Despite a shortened high school education and no formal musical training, Guthrie's eager reading and focus on music supported him throughout his life. All of the Guthrie children were brought up on blues and Native American songs, favored by their father, and folk songs, favored by their mother.

Guthrie led one of the most tragic lives of any famous American. A series of family tragedies overlapped with the nation's slide into the Great Depression (a time of severe economic hardship in the 1930s). Two homes burned to the ground and another was destroyed. Guthrie's mother became ill with Huntington's chorea (a gradual, fatal disease of the nervous system), which she passed on to Guthrie. His father lost all of his businesses as the country struggled with the Stock Market Crash (October 29, 1929; a day when investors sold over sixteen million shares of stocks because they feared the possible effects of a recently signed tax bill—many people lost everything, suicides were common, banks failed, and stores closed). Virtually orphaned at the age of fourteen, with his family falling apart, Guthrie developed a roaming way of life that he never entirely abandoned.

In the course of Guthrie's travels he learned to perform folk songs, first those of others but later his own. He survived with odd jobs in settings as varied as hobo camps and barbershops. With a harmonica and the music of his parents he traveled the southwest, witnessing the devastation of both the Great Depression and the Dust Bowl (a time during the 1930s when thousands of people left their farms in a region of the Great Plains after overuse of land and a long period without rain caused massive dust storms and made farming in the area impossible).

In Texas Woody was given his first and only guitar. With a few chords under his belt he began writing songs, some to old tunes and some to new ones. In 1937 he got a hold of, through a cousin, the first of many radio jobs, singing and playing on a Los Angeles station. He also acquired permanent ties to the Communist Party (a political party that promotes a society in which all goods and services are divided equally between the people). In 1940 he arrived in New York City and was discovered by Alan Lomax, assistant director of the Archive of Folk Songs of the Library of Congress. Lomax recorded many of Guthrie's songs for the library. He also promoted Guthrie's career in other ways, such as 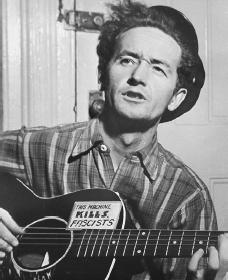 Woody Guthrie.
Courtesy of the
Library of Congress
.
by getting Victor Records to produce a two album, twelve record set of Guthrie's "Dust Bowl Ballads." (A ballad is a song that tells a story.) Though they did not sell, the ballads were to have a lasting influence.

A witness to Hoovervilles (clusters of homeless people living in cardboard box villages named after President Herbert Hoover [1874–1964] who had promised better times) and migrant camps (temporary housing for families who get paid to harvest crops and move frequently to follow the harvest), Woody was drawn to people with a social conscience (an awareness of less fortunate members of society). Actor Will Geer teamed up with him and toured both labor camps and farm worker strikes.

At the brink of America's entry into World War II (1939–45; a war in which the Allies—Great Britain, France, the Soviet Union, the United States [from 1941], and others—fought against the German-led Axis forces), Guthrie joined the Almanac Singers, a left-wing folk music group that included Pete Seeger (1919–), who eventually became a well-known member along with Guthrie. On February 14, 1942, the Almanacs gained their greatest exposure when they performed on a program called "This Is War," which was aired by four major networks. Except, newspaper stories about the group's Communist affiliations prevented the Almanacs from achieving commercial success. They dissolved within a year. Most of the members of the Almanacs were very anti-Nazi (German political party in rule during World War II that believed in the superiority of the white Aryan [German] race), and they enrolled in the U.S. military.

Guthrie supported the war too. "This Machine Kills Fascists" (people who support a centralized government ruled by a dictator with absolute power) was inscribed on his guitar. But he hoped to accomplish his goal at a distance. He tried in vain to avoid the draft (government selection for military service). To stay out of the U.S. military he served in the merchant marine, but it was a dangerous strategy—two of the three ships he served on were lost. In addition, he was drafted into service anyway. Upon his discharge from the army in 1946 he joined People's Songs, another radical (extreme) musical association. It also failed because of the Communist connection, which was even more offensive during the Cold War (1945–89; a struggle for world power between the United States and the Soviet Union).

Pete Seeger organized a folk-singing group called The Weavers in 1948, and for several years it produced one hit record after another. Though Guthrie was not a Weaver, their success helped his music. His "So Long, It's Been Good to Know You" became one of their most popular numbers. But The Weavers were soon blacklisted (labeled as Communists and therefore not given any financial or professional support), and the fashion for popularized folk music disappeared with them.

By this time Guthrie's health was visibly failing. In 1952 he was diagnosed with Huntington's chorea. He died of the disease on October 3, 1967, in New York City.

Though a poor musician and an inconsistent performer, Guthrie wrote an estimated one thousand songs, which have earned him a secure place in musical history. When he was discovered, folk music had few fans except radicals (extremists) and a handful of admirers and musicologists (music researchers). Guthrie and The Weavers were responsible for folk music's brief popularity in the late 1940s and early 1950s, and they influenced the greater following it developed ten years later. Though folk music became less popular, it continued to exist, and Guthrie's legacy was very much a part of it. The year 2001 brought a revival of folk music mania after the release of O Brother, Where Art Thou?, a movie set in the 1930s that was rich with folk and hill music.

Guthrie's legendary influence on folk music is hard to assess. He was famous among leftists (those wishing for change and reform) in the 1940s, and by the 1960s, though hospitalized and unable to speak, he had become a heroic figure. Bob Dylan (1941–), before he himself became famous as the leading composer of political songs, made a pilgrimage (a journey to show respect) to Guthrie's bedside. Guthrie's reputation was based on his authentic folk origins and hobo inclinations, his remarkable talents as a writer and composer, and a romantic appreciation of his politics.

Wondering about other siblings and children of Woody
Is there a Jody (Jodi) Guthrie??? male son or nephew?