American financier and railroad builder Jay Gould made a fortune by controlling the price of the stocks he bought as well as the stock market itself. He later became one of the shrewdest businessmen in American industry.

Jayson Gould was born in Roxbury, New York, on May 27, 1836, the son of John Gould and Mary More. His father was a farmer and a storekeeper, and Jay, as a small boy, grew up on a farm. He realized at a young age, however, that farm work was not to his liking. He received some education in a local school. Later, while working in his father's store, he taught himself surveying (mapping land) and mathematics at night. When he was just sixteen he started a survey business. Between the ages of eighteen and twenty-one he helped prepare maps of New York's southern counties. At twenty-one Gould invested five thousand dollars, and he and a partner opened a business tanning leather in northern Pennsylvania.

Gould then moved to New York City, where he became a leather merchant in 1860. Before long, however, he found his place on Wall Street, the financial center of the United States. In name he was a stockbroker (a person who buys and sells stocks for others), but really he was a speculator (a person who buys and sells stocks in hopes of profiting by correctly guessing their future prices). Gould quickly mastered the art of managing a business, of stock trading, and of manipulation (causing the price of a stock to change for personal gain). He traded in the stocks of his own companies, using banks he was associated with to finance his speculations, all the 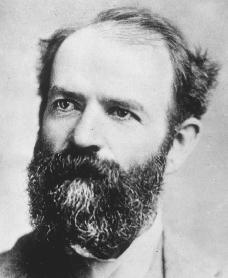 Jay Gould.
Reproduced by permission of
Archive Photos, Inc.
while bribing legislators and judges. From 1867 to 1872 he was a power and a terror on Wall Street.

In 1867 Gould was already on the board of directors (the controlling committee of a company) of the Erie Railroad, which was having financial difficulties. He set out to control the railroad and to push its lines westward as far as Chicago, Illinois, and to defeat industrialist Cornelius Vanderbilt's (1794–1877) effort to acquire this potential competitor. In the "Erie war" with Vanderbilt in 1868, Gould issued one hundred thousand shares of new Erie stock, using illegal means. He then went to Albany, New York, to bribe legislators to "legalize" the action. Vanderbilt discovered he had met his match and settled, receiving $1 million and leaving the Erie Railroad to Gould.

Gould then began to expand the Erie, which vastly increased its debt. Meanwhile, he traded in Erie stock and skillfully made a lot of money before the railroad had to go out of business because of financial problems in 1875.

As part of the Erie's move westward, Gould obtained control of the Wabash, a railroad that carried wheat. To improve the fortunes of the Wabash, Gould hit on the scheme of pushing up the price of gold, thus weakening the value of the U.S. dollar, and thereby encouraging foreign merchants to buy more wheat.

In the summer of 1869 Gould secretly began buying gold on the free market—hoping the U.S. Treasury (the main financial institution of the federal government) would not sell its gold. He ran the price up to where it was on September 24, 1869, now known as Black Friday because it was a day that saw a serious financial emergency. Then the U.S. Treasury, realizing that Gould had tricked it, started selling gold, and the price dropped significantly. A panic hit Wall Street, sending the price of all stocks down. Gould had speculated not only in gold but also in stocks and he lost a fortune. In 1871 and 1872, however, he made another.

Once again a man of money, Gould moved his operations westward into the Wabash, the Texas and Pacific, the Missouri Pacific, and the Union Pacific Railroads. His operations in the last two railroads demonstrate his methods well. He bought their stocks when their prices were low during the depression (a time when a country's economy is unhealthy) of 1873, obtaining control of both railroads. He also acquired the stocks of other, smaller railroads he wanted to add to the two main systems. Then he forced up the prices of the two main railroads. When the stock market recovered from 1879 to 1884, he sold the railroad stocks at prices far greater than what he had paid for them, making yet another large fortune.

Gould was forced out of the Wabash and the Union Pacific Railroads in the early 1880s. He then turned his complete attention to the Missouri Pacific Railroad (of which he had gained control in 1879) and built it into a great power. He acquired new railroad lines and independent companies, used stock-market profits for financing, and waged a relentless war on competitors. His biographer, Julius Grodinsky, wrote that Gould was changed "from a trader into a business leader of national proportions." From 1879 to 1882 Gould added twenty-five hundred miles to the railroad at a cost of about $50 million. Between 1885 and 1889 he again gained control of the Wabash and the Texas and Pacific Railroads, changed how they were organized, and tied them into his Missouri Pacific system.

At the same time Gould strengthened the other two elements that made up his wealth. One was the Manhattan Elevated Railroad of New York, which he created as a monopoly of New York City's rapid transit system. The second was the Western Union Telegraph Company. Gould had bought the insignificant American Union Telegraph Company in 1879, joined it with Western Union in 1881, and seven years later added the telegraph network of the Baltimore and Ohio Railroad. By the end of the 1880s Western Union had no real competitor in the two important businesses of railroad telegraphy and sending Associated Press stories to member newspapers. Western Union was one of the most profitable companies in the country. Gould died in New York on December 2, 1892, leaving the management of his properties to his son George Jay Gould.