Al Gore, U.S. representative, senator, and forty-fifth vice president of the United States, lost one of the closest presidential elections in history, in 2000, to George W. Bush (1946–). Gore is known for his strong interest in conservation and has spent much of his time in public office working to preserve and protect the environment.

A lot to live up to

Albert Gore, Jr., was born in Washington, D.C., on March 31, 1948. His father, Albert Gore, Sr. (1907–1998), served in the House and the Senate for nearly three decades. His mother, Pauline (LaFon) Gore, was one of the first women to graduate from the law school at Vanderbilt University. As the son of a senator, Gore learned at an early age what it was like to live in the public eye. This gave him a sense of caution that made him seem mature beyond his years.

Gore received a bachelor's degree, with honors, in government from Harvard University in 1969. He then served as an army reporter during the Vietnam War (1955–75; a civil war in which South Vietnam, with the help of the United States, was fighting against Communist forces in North Vietnam). During the war, on May 19, 1970, Al Gore married his college sweetheart, Mary Elizabeth "Tipper" Aitcheson. The couple eventually had four children.

After returning from Vietnam, Gore went on to work as a reporter in Nashville, Tennessee. He was also a home builder, a land developer, and a livestock and tobacco farmer. He went back to school, studying philosophy (the search for an understanding of the world and a human being's place in it) and law at Vanderbilt University.

In 1976 Gore decided to run for a seat in the U.S. House of Representatives. With his famous name, as well as running in the district that had sent his father to Congress for many terms, he beat eight other candidates in the primary election and went on to win in the general election. He ran successfully in the three following elections. Gore received some early attention in 1980 when he was assigned to the House Intelligence Committee studying nuclear weapons. He researched and wrote out a detailed plan to reduce the number of nuclear weapons, which was published in the February 1982 issue of Congressional Quarterly. He also focused on health- and environment-related matters. He stressed the future usefulness of new technologies and computer development. In 1984 Gore campaigned for a seat in the U.S. Senate and won by a wide margin.

In 1988 Gore decided to enter the race for the presidency. He was only thirty-nine years old. He was criticized for failing to develop a national theme for his campaign and for changing positions on issues. He had some early success in primary elections in the spring, winning more votes than any other candidate in southern states. However, he obtained only small percentages of votes in other states and withdrew from the race in mid-April. Two years later he won election to a second term in the U.S. Senate. He chose not to run for the presidency in 1992 because of family matters. His son had been hit by a car and was seriously injured.

It was during this time that Gore wrote the book Earth in the Balance: Ecology and the Human Spirit, which expressed his concerns, ideas, and recommendations on conservation and the global environment. In the book he wrote about his own personal and political experiences and legislative actions on environmental issues. His feelings about the environment are best expressed in this statement from the book: "We must make the rescue of the environment the central organizing principle for civilization."

In the summer of 1992, Bill Clinton (1946–) selected Gore as his running mate (vice presidential candidate). The choice surprised many people because it ended a longstanding pattern of candidates choosing running mates to "balance the ticket, " that is, by choosing running mates of different ages or from different areas of the country. Both men were about the same age, came from the same region, and had similar reputations and political viewpoints. Clinton's idea was to project a new generation of leadership as a campaign theme. Gore provided balance for Clinton with his experience in foreign and defense policy, his knowledge of environmental and new technology issues, and his image as an honest family man.

The highlight for many who followed the campaigns of 1992 was a series of debates, one of which involved Gore and his opponents, Republican Dan Quayle (1947–) 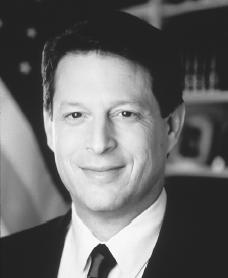 Al Gore.
Reproduced by permission of
Archive Photos, Inc.
and Independent James B. Stockdale (1923–). The debates were marked by moments of comedy, as Quayle and Gore argued over the wording of Gore's book Earth in the Balance. Stockdale admitted that he had turned off his hearing aid. Quayle attacked Gore's record of environmental concerns, claiming Gore was placing endangered species (animals that are in danger of disappearing from the earth) over people's jobs. Gore argued that a well-run environmental program would create jobs while preserving nature.

Clinton and Gore won the election, and Gore was inaugurated (sworn in) as the forty-fifth vice president on January 20, 1993. At the age of forty-four, he became one of the youngest U.S. vice presidents in history. Clinton and Gore were reelected in 1996. During his time as vice president, Gore continued to focus on environmental concerns. In 1997 the White House launched an effort, initiated by Gore, to start producing a "report card" on the health of the nation's ecosystems. (An ecosystem is made up of a community of plants and animals that share a certain area, and the nonliving elements in that area, such as oxygen, soil, water, and sunlight.)

In 1997 Gore's reputation was damaged when he admitted to making fund-raising telephone calls from the White House during the 1996 presidential campaign. Gore held a press conference to defend his actions, saying he had done nothing illegal. Gore was also criticized when, during a trip to China, he raised his glass and proposed a toast to an official named Li Peng (1928–). Li Peng had been involved with the Tiananmen Square Massacre of 1989, when soldiers killed thousands of students and workers who were demonstrating for democracy in Beijing, China.

Still, as Clinton's second term was winding down in August 2000, the Democratic Party formally named Gore as its choice to run for president. Gore revealed a long-range economic plan that he claimed would balance the budget, reduce the national debt and keep interest rates low while creating new opportunities for the middle class. However, after a long campaign and legal challenges to the Florida vote count that delayed the official result, Gore lost to Texas governor George W. Bush (1946–) in one of the closest presidential contests in American history.

Despite Gore's loss in the 2000 presidential election, he continues to be an active and well-respected political figure. Many believe that the 2000 election was not Gore's last attempt at the presidency.

Kaufman, Joseph, compiler. The World According to Al Gore: An A-to-Z Compilation of His Opinions, Positions, and Public Statements. Los Angeles: Renaissance Books, 1999.