B enjamin Franklin was a leader of America's revolutionary generation. His character and thought were shaped by his religious upbringing, the philosophy of the historical era known as the Enlightenment, and the environment of colonial America.

Benjamin Franklin was born on January 17, 1706, in Boston, Massachusetts, into a devoted Puritan household. (The Puritans were a religious group that stood against the practices of the Church of England.) In 1683 his family had left England and moved to New England in search of religious freedom. Franklin's father was a candlemaker and a mechanic, but, his son said, his "great Excellence lay in a sound Understanding, and solid Judgment." Franklin also praised his mother, who raised a family of thirteen children.

Young Franklin was not content at home. He received little formal schooling and by age eleven went to work making candles and soap at his father's shop. However, he hated this trade—especially the smell. Franklin eventually left his father's shop and went to work for his brother James, who was the printer of a Boston newspaper. While learning the business Franklin read every word that came into the shop and was soon writing clever pieces that criticized the Boston establishment. He loved to read and even became a vegetarian in order to save money to buy books. When authorities imprisoned James for his own critical articles, Benjamin continued the paper himself. In 1723 at age seventeen Franklin left home and moved to Philadelphia, Pennsylvania.

By this time Franklin had begun to embrace the ideas of such Enlightenment thinkers as the physicist Sir Isaac Newton (1642–1727) and the philosopher John Locke (1632–1727). The Enlightenment, which began in the sixteenth century and lasted until the late seventeenth century, was a movement that promoted the use of reason to learn truth. During this time period, many important scientific advances and discoveries were made through the use of observation and experimentation.

In Philadelphia, Franklin began working as a printer. In 1724 he went to England, where he quickly became a master printer and lived among the writers of London. He returned to Philadelphia and started his own press, publishing a newspaper called the Pennsylvania Gazette and a publication called Poor Richard's Almanack, which contained advice and sayings that are still popular in America today. He then became clerk of the Pennsylvania Assembly and postmaster of Philadelphia. At the same time he operated a bookshop and developed partnerships with other printers. Franklin also became involved in community improvement in 1727. He organized the Junto, a club of tradesmen whose activities included sponsoring a library, a fire company, a college, an insurance company, and a hospital.

Next, Franklin turned to science. Having already invented what became known as the Franklin stove (a metal stove used for heating a room), he now became fascinated with electricity. In a famous experiment he used a kite to prove that lightning is a form of electricity. The mysterious and terrifying natural occurrence now had an explanation. Franklin's letters concerning his discoveries and theories about electricity brought him fame. His invention of the lightning rod (a metal rod that is set on top of a building to protect it from being damaged if it is struck by lightning) added to his reputation.

Franklin's 1751 election to the Pennsylvania Assembly began his nearly forty years as a public official. He became a leader in the long-dominant Quaker political party, which opposed the Proprietary party (a political party made up of people who sought to preserve the power of the Penn family, the founding family of Pennsylvania). In the Assembly, Franklin created lawmaking strategies and wrote powerful statements defending the right of the people's elected representatives to regulate the government of Pennsylvania.

As a representative in the Assembly, Franklin was initially loyal to the British empire. He was on the side of the empire during the French and Indian War (1754–63; a war fought between France and Great Britain, which resulted in British control of land in North America east of the Mississippi River). In order to defend the British empire, he persuaded the Assembly to pass Pennsylvania's first militia law, set aside budget money for defense, and appoint government representatives to carry on a full-scale war. For three decades or more Franklin had considered Britain a vital, freedom-extending country as dear and useful to its people in America as to those in England. Nevertheless, he was occasionally alarmed by British indifference toward the desires of people living in the colonies.

Franklin lived in England from 1757 to 1762, seeking aid in restraining the power of the Penn family in Pennsylvania. Returning to America for nearly two years, he traveled through the American colonies as deputy postmaster general for North America. In this position, which he held for twenty years, Franklin greatly improved the postal service. He also continued his aid to poorer members of his family and to the family of his wife, Deborah. They had two children, Frankie, who died at four, and Sally. Deborah Franklin also raised her husband's illegitimate son, William.

In 1764 Franklin lost his seat in the Pennsylvania Assembly. However, he returned to England as Pennsylvania's agent, with a special assignment to request that Pennsylvania be taken over as a royal colony. When the dangers of royal government began to increase, Franklin decided not to make the request.

Franklin played a central role in the great crises that led to the Declaration of Independence in 1776. In 1765 the Stamp Act placed a tax on all business and law papers and printed materials in the American colonies. Many colonists opposed the tax as taxation without representation. After learning of the 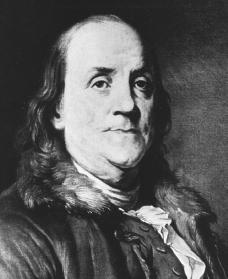 Benjamin Franklin.
Courtesy of the
Library of Congress
.
violent protest against the Stamp Act, Franklin stiffened his own stand against the measure. In a dramatic appearance before Parliament in 1766, he outlined American insistence on self-government. Nevertheless, when the tax was removed Franklin again expressed his faith in America's prospects within the British empire.

Franklin was the foremost American spokesman in Britain for the next nine years. However, in 1775 his service in England came to an unhappy end. Against his instructions, his friends in Massachusetts published letters by Massachusetts governor Thomas Hutchinson (1711–1780) that Franklin had obtained on a confidential basis. Exposed as a dishonest schemer, Franklin was reprimanded (scolded) by the British in 1774 and removed from his position as postmaster general. Although he was in danger of being jailed as a traitor, Franklin continued to work for better relations. Radical protests in America and the buildup of British troops there doomed such efforts.

Franklin left England in March 1775. The American Revolution (1775–83; a war in which American colonies fought for independence from Great Britain) had begun on April 19, 1775, with the battles of Lexington and Concord in Massachusetts. During the next several months in America, Franklin enjoyed the surge for independence. In 1776 he helped draft the Declaration of Independence and was among those who readily signed his name to it. At the age of seventy he had become a passionate revolutionary.

Franklin's skill was most in demand as a diplomat (someone who is skilled at handling difficult affairs) to secure desperately needed aid in the American war for independence. In 1776 he was appointed as a representative to France. There he gained astonishing personal success, winning the admiration of French intellectuals and the Parisian society. However, Franklin's diplomatic tasks proved more difficult. Though France was anxious for England to be defeated, it could not afford openly to aid the American rebels unless success seemed likely.

In 1777 Franklin worked behind the scenes to speed war supplies across the Atlantic and win support from French political leaders who might help the United States. In December 1777 his efforts were rewarded when France's King Louis XVI (1754–1793) entered into an alliance with the United States. As the leading American representative in Europe, Franklin helped get French armies and navies on their way to North America, continued his efforts to supply American armies, and secured almost all of the outside aid that came to the American rebels.

After the British surrender at Yorktown, Virginia, in 1781, Franklin made the first contact with representatives of the British government. During the summer of 1782 as the other peace commissioners, John Adams (1735–1826) and John Jay (1745–1829), made their way toward peace negotiations in Paris, Franklin set the main terms of the final agreement. These included independence, guaranteed fishing rights, removal of all British forces, and a western boundary on the Mississippi River. Franklin, Adams, and Jay made an ideal team, winning for the United States a peace treaty of genuine national independence in 1783.

Franklin returned to Philadelphia from France in 1785. He accepted election for three years as president of the Supreme Executive Council of Pennsylvania and was active in various projects and causes. Although ill, he also finished his autobiography.

Franklin's most notable service at this time was his attendance at the Constitutional Convention during the summer of 1787. At the convention's close he asked each member, who like himself might not entirely approve of the Constitution, to sign the document to give it a chance as the best frame of government that could be produced at the time. His last public service was to urge ratification (approval) of the Constitution and to approve the inauguration (swearing into office) of the new government under his old friend George Washington (1732–1799). Franklin died peacefully in Philadelphia on April 17, 1790.

Great article. how should I document this article in MLA format