Sixty-four years after American women won the right to vote, Geraldine Ferraro became the first woman candidate for the vice presidency of a major political party. She had previously served three terms in the U.S. House of Representatives.

Geraldine Ferraro was born on August 26, 1935, the third child of Dominick and Antonetta Ferraro. Dominick Ferraro was an Italian immigrant who operated a nightclub in Newburgh, a small city north of New York City known to be wide open to organized crime. When Ferraro was eight years old, her father was arrested and charged with operating an illegal gambling operation. He died of a heart attack the day he was to appear for trial. After her father's death, the Ferraro family moved, first to the Bronx, and then to a working-class neighborhood in Queens. Here, Antonetta Ferraro worked in the garment industry to support herself and her children.

Ferraro was an excellent student, skipping from the sixth to the eighth grade and graduating from high school at age sixteen. She won a full scholarship to Marymount Manhattan College, where she became the editor of the school newspaper. While still attending Marymount, she also took education courses at Hunter College. In this way she prepared herself to teach English in the New York City public school system after she graduated from college. While teaching, Ferraro attended Fordham University's evening law classes. She received her law degree in 1960. The week she passed the bar exam she married John Zaccaro (1935–), but she kept her maiden name in honor of her mother.

From 1961 to 1974 Ferraro practiced law, had three children, and worked in her husband's real estate business. In 1974, with her youngest child in second grade, she agreed to serve as an assistant district attorney 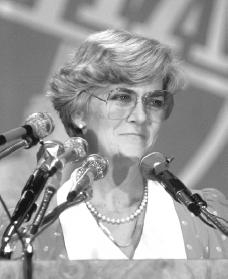 Geraldine Ferraro.
Reproduced by permission of
Archive Photos, Inc.
in Queens County. While in this post she created two special units, the Special Victims Bureau and the Confidential Unit. As chief of these units, Ferraro specialized in cases involving sex crimes, crimes against the elderly, family violence, and child abuse. From 1974 to 1978 she also served on the Advisory Council for the Housing Court of New York City and as president of the Queens County Women's Bar Association.

In 1978 Ferraro decided to run for Congress. She spent more money on her campaign than her opponents in the Democratic primary race and won. Ferraro's opponent in the general election was a conservative Republican and she chose to wage a campaign stressing law and order. Her slogan, "Finally, a Tough Democrat," appealed to voters, and she won the election. Ferraro easily won reelection in 1980 and 1982. She kept conservatives (in favor of preserving tradition and gradual change) happy by supporting things such as tax breaks for parents of children attending private schools, but for the most part she followed a more liberal course. For example, she spent a great deal of time on issues affecting the rights of women.

In 1982 Ferraro was appointed to the House Budget Committee, which helps plan national spending. She also served as a member of the House Committee on Public Works and Transportation. Coming from a district with two major airports nearby, Ferraro spoke out in favor of improved air safety and noise control. As a member of the Select Committee on Aging she worked to fight crimes against the elderly and to improve health care and create senior citizen centers. As a member of the Congressional Caucus for Women's Issues (a group of congresspeople concerned with issues involving women), Ferraro helped lead the successful battle for passage of the Economic Equity Act, which ended discrimination (unequal treatment) against women in the awarding of salaries and pensions. She was the author of those sections of the Equity Act dealing with private pension reform and increasing retirement savings options for the elderly.

As Ferraro continued to be active in Democratic Party affairs, she also worked hard to achieve national recognition and to correct any impression that she lacked foreign policy experience and skill. In 1983 she traveled to Central America and to the Middle East. As nomination time approached for the 1984 presidential election, she talked frequently about these trips and about her other international experience. After an exhausting series of interviews, Geraldine Ferraro was chosen by Democratic presidential nominee Walter F. Mondale (1928–) as his running mate.

As a vice presidential candidate, it was thought that Ferraro would greatly benefit Mondale's presidential campaign. Democrats hoped that Ferraro would help take advantage of the gender gap—that is, the clear difference in voting patterns between men and women that occurred in the 1970s and 1980s, with women voting in greater numbers than men and voting for Democratic candidates and peace issues more than men. Ferraro was also appealing as a candidate from a strong working-class and ethnic background and district. Democratic Party leaders considered it very important for Mondale to win among such voters.

The popularity of President Ronald Reagan (1911–) with the voters, however, resulted in a solid reelection victory. Mondale and Ferraro received only 41 percent of the popular vote and thirteen electoral votes (from Minnesota and the District of Columbia). Mondale was hurt most by his plan to raise taxes and his unclearly defined economic program. Ferraro's main problem as a candidate was the investigation of her husband John Zaccaro's real estate business and tax records. The gender gap had not made the difference that the Democrats had hoped for.

After Ferraro's term as a congresswoman ended in January 1985, she wrote a book about the vice presidential campaign. For some time, she chose to stay out of politics. In 1986, she passed up the opportunity to challenge Alphonse D'Amato (1937–), the Republican senator from New York. In 1990 Ferraro campaigned aggressively on behalf of female Democratic candidates in New York. She launched her own political comeback in 1992, when she entered the New York Democratic primary as a candidate for the United States Senate. Competing against three other candidates in the primary, Ferraro faced a tough battle and wound up finishing second, fewer than ten thousand votes behind Elizabeth Holtzman (1941–), who was defeated in the general election.

Geraldine Ferraro continues to speak out for liberal policies. In 1993 she published a book demanding more power for women. Beginning in 1996 she appeared every other week on "Crossfire," a political talk show on the Cable News Network (CNN). Occupying the chair opposite former chief of staff John Sununu (1939–), she continued to call for increased government spending and more federal programs on behalf of those she considers "underprivileged." Ferraro declared her political career at an end in 1998 when she lost the Democratic Senate primary race in New York.

Ferraro continues to support women's interests and other social issues. She has served as the copresident of G&L Strategies, a company that advises other businesses and organizations about issues involving race and gender. In 2001 Ferraro made an announcement that she had been diagnosed with an often-fatal form of blood cancer in 1998. She then began to use her illness as a way to educate the public about cancer and increase funding for research to fight the disease. According to Ferraro, "I will help raise awareness. I will help raise money. I will nudge people I know who could make a difference as far as research is concerned. I will beg people to go out and get themselves checked."