The Italian American physicist (specialist in the relationship between matter and energy) Enrico Fermi developed the first nuclear (using atomic energy) chain reaction, which helped lead to the creation of the atomic bomb.

Enrico Fermi was born on September 29, 1901, in Rome, Italy, the third child of Alberto and Ida de Gattis Fermi. His father was an inspector in the Ministry of Railroads, and his mother was a schoolteacher. At about the age of ten his interest in mathematics and physics awakened. A friend of his father's, the engineer Adolfo Amidei, recognized Fermi's intellectual abilities and guided his mathematical and physical studies by loaning him books during his teenage years.

Late in 1924, after leaving Leiden, Fermi went to the University of Florence, Italy, where he taught mathematical physics and theories of mechanics (the study of forces and their effect on matter). In 1926 he published his first major discovery, what became known as Fermi-Dirac statistics. He had come up with a way to determine the properties and behavior of certain particles that obey (conform to) Wolfgang Pauli's exclusion principle. (Pauli's principle holds that no two particles have the same position and the same velocity, or speed.) These obeying particles are now known as fermions.

Fermi's discovery came directly from his own studies. These studies began in 1923 but ran into problems because Pauli's idea was not then known. Fermi saw immediately that all particles (fermions) obeying Pauli's not-yet-proposed exclusion principle would behave in a certain way. This discovery led to an understanding of certain features of gas theory and of how metals conduct electricity, among other things. It also became the foundation of Fermi's widely used 1927 model of the atom.

The years between 1926 and 1938 are considered Fermi's "golden age." He accepted the chair of theoretical physics (existing in theory only) at the University of Rome in 1926 and three years later became one of the first thirty members (and only physicist) to be elected to the Royal Academy of Italy. In 1928 he married Laura Capon; they had two children.

Fermi's most famous work of this period was his 1933 theory of nuclear beta decay. In beta decay a particle (beta particle), known to be identical to an electron in that it is said to have a "negative" electric charge, is given off from the nucleus (core) of an atom. This increases the atomic number (the number of protons, or particles with "positive" electric charges, minus the number of electrons) of the nucleus by one unit. Fermi worked out a detailed theory of beta decay based on the idea that a neutron (a particle with no electric charge) in the nucleus "decays," or changes, into three particles: a proton, an electron (beta particle), and a neutrino. Actually, the neutrino (a particle without mass or electric charge) was not found in experiments until the 1950s.

In the late 1920s Fermi came up with a source of neutrons with which to experiment and determine whether neutrons could cause radioactivity (a process by which the atoms of an element give off particles of matter and harmful rays of energy). Fermi constructed a machine similar to a Geiger counter (a device for measuring radioactivity) and started bombarding different elements with neutrons. He had no success until he detected a weak radioactivity while subjecting fluorium to the treatment. This key date was March 21, 1934. By summer 1934 Fermi and his coworkers had tested many substances and detected a slight radioactivity in some.

Fermi and his team then found that the level of radioactivity created in a substance was increased if a filter made of paraffin (a waxy substance) was placed in the path of the neutrons bombarding the substance. Fermi's idea was that in passing through the paraffin (a compound containing a large amount of hydrogen), the speed of the neutrons was reduced by contact with the hydrogen atoms, and these very slow neutrons caused a much higher radioactivity in substances than fast neutrons did. Slow neutrons produce one kind of reaction, fast neutrons another. The discovery of the properties of slow neutrons was the key discovery in neutron physics. 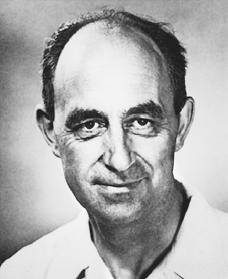 Enrico Fermi.
atmosphere in Italy. In December 1938 the Fermi family went to Stockholm, Sweden, for the presentation of the Nobel Prize in physics to Fermi. He and his family then left for the United States, arriving in New York in January 1939, where Fermi accepted a position at Columbia University.

With the assistance of fellow physicist Herbert L. Anderson, Fermi produced a beam of neutrons at Columbia, with which he proved that the fission (the splitting of an atom into two roughly equal parts) of uranium was possible. By mid-1939 there was evidence that a man-made nuclear chain reaction might be possible. (The goal was to get at least one of the neutrons released in a fission reaction to cause another fission, with the process repeating over and over. This would lead to the release of a large amount of energy very quickly.) The military became very interested, and Fermi was asked to direct the research on the idea. He and other physicists moved to the University of Chicago in early 1942; by October, Fermi was confident that he knew how to get the job done, and the project (the "Manhattan Project") was under way. Construction began in November, and on December 2 Fermi directed the operation of the first self-sustaining chain reaction created by man. It lasted forty minutes and created power equal to one-half watt, enough to activate a penlight. It was the opening of the Atomic Age.

As a result of Fermi's experiment, huge national laboratories were constructed, one of which, Los Alamos, had immediate responsibility for the construction of the nuclear bomb. In September 1944 Fermi was brought in from Chicago for the final important stages in the construction of the bomb. By early 1945 the project had proceeded to the point where it was time to explode the deadly weapon. The test, which had the code name "Project Trinity," was successfully carried out in July 1945, in the desert in southern New Mexico.

In December 1945 Fermi became professor of physics and a member of the Institute for Nuclear Studies (now the Enrico Fermi Institute) at the University of Chicago. During this period his reading and range of interests decreased considerably. For a few years he continued to work in nuclear physics. Around 1949 his interest shifted to high-energy (particle) physics. Enrico Fermi died in Chicago, Illinois, on November 29, 1954.

Fermi, Laura. Atoms in the Family: My Life with Enrico Fermi. Chicago: University of Chicago Press, 1954.