Elizabeth II became queen of the United Kingdom upon the death of her father, George VI (1895–1952), in 1952. A popular queen, she is respected for her knowledge of and participation in state affairs. In addition, Elizabeth II has started new trends toward modernization and openness in the royal family. Her efforts have not been unsuccessful.

Elizabeth II was born on April 21, 1926, in London, England, the oldest child of the Duke of York and his wife, Elizabeth. Her father became King George VI of Great Britain and Ireland in 1936 when his older brother Edward VIII (1894–1972) gave up the throne. Along with her younger sister, Margaret, Elizabeth was educated at home by private tutors. She particularly liked history, languages, and music. She later took an interest in national affairs. As a teenager Elizabeth began to make her first public appearances. She married Philip Mountbatten in November 1947, and they had four children—Prince Charles (1948–), Princess Anne (1950–), Prince Andrew (1960–), and Prince Edward (1964–).

After Elizabeth became queen in 1952, she tried in her own way to make the British monarchy more modern and more sensitive to the public. She began hosting informal luncheons at Buckingham Palace (the London residence of the queen) to which a variety of people from fields such as industry, theater, and sports were invited. The attendees of her garden parties became increasingly diverse. She showed interest and skill in use of the broadcast media, notably in her annual Christmas television messages, in royally approved documentaries, and in television broadcasts of events such as Prince Charles's naming ceremony as Prince of Wales and royal weddings.

Perhaps the most popular of Elizabeth's attempts was the "walkabout," in which she met, shook hands, and chatted with ordinary people in the crowds that gathered around her. These strolls revealed her belief that "I have to be seen to be believed."

At least part of Elizabeth's popularity could be attributed to her worldwide travels. Her engaging and gracious attitude during these travels contributed to the warmth and enthusiasm of the receptions that greeted her. Between 1970 and 1985 she had an amazingly full schedule. She visited France in the spring of 1972, attended the Commonwealth Conference in Ottawa in 1973, and took part in the United States celebrations of the two-hundredth anniversary of American independence from England. She then headed north to Montreal to open the 1976 Summer Olympics. She also traveled some fifty-six thousand miles as part of her 1977 Silver Jubilee celebrations, which marked her twenty-fifth year as queen. In 1979 she traveled to Kuwait, Bahrain, Saudi Arabia, Qatar, the United Arab Emirates, and Oman.

In April 1982 Elizabeth made an important visit to Ottawa, Canada, where she proclaimed the New Canadian constitution, which cut the last legal links between the United Kingdom and Canada. In March 1984 she visited Jamaica, Grand Cayman Island, Mexico, California, and British Columbia, Canada. While in California, her first trip to the west coast of North America, she made some twenty public appearances, including a visit with Prince Philip to President Ronald Reagan's (1911–) Santa Barbara ranch and to Yosemite National Park. She went to North America again in 1984, visiting Canada for the fourteenth time and afterward the United States.

Amid all the travels, Elizabeth celebrated many joyous personal events. On November 20, 1972, the queen and Prince Philip celebrated their twenty-fifth wedding anniversary. One hundred couples from all over Britain who had the same anniversary date were invited to share in the occasion. On November 14, 1973, Princess Anne married Mark Philips and later had two children: Peter and Zara. Prince Charles married Lady Diana Spencer on July 29, 1981, and had two sons, Prince William and Prince Henry. Prince Andrew (made Duke of York) married Sarah Ferguson on July 23, 1986, and they had two daughters, Princess Beatrice and Princess Eugenie.

Perhaps the happiest event was Elizabeth's Silver Jubilee in 1977. Countless sports events, festivals, carnivals, races, concerts, commemorative stamps, and other activities marked an outpouring of devotion to the queen and to the royal family as an institution. On May 4, 1977, both Houses of Parliament presented loyal addresses to Elizabeth II in Westminster Hall. At St. Paul's Cathedral in June the queen and her family celebrated a Thanksgiving service. The queen indicated her concern for her subjects by voicing her desire that the Silver Jubilee year be a special time "for people who find themselves the victims of human conflict." She traveled widely to meet her subjects during the year, and established the Silver Jubilee Trust Fund, headed by the Prince of Wales, which was designed "to help the young to help others."

Elizabeth Longford, one of Queen Elizabeth's biographers, has suggested that it was only after the jubilee, when she was able to see the loyalty and respect her subjects demonstrated, that she realized her possibilities as a monarch. She became more confident, more open, and more ready to reveal her sense of humor, strong common sense, great energy, and personal character.

Troubles on the horizon

However, in the late 1980s, Elizabeth grew concerned over the state and the future of the royal family. The British press increasingly reported the problems in her children's marriages. It appeared to many that Prince Charles was not interested in succeeding to the throne. There were rumors that Elizabeth II would hand over the throne to her grandson, Prince William.

Her troubles seemed to peak in 1992, and she herself called it a horrible year. The twenty-year marriage of Princess Anne ended in divorce. Prince Charles and Prince Andrew officially separated from their wives. On the night of November 20, fire badly damaged a good section of Windsor Castle (one of Queen Elizabeth's official residences). A public outcry immediately arose when it was announced that the castle's restoration would be paid for with taxpayers' money. The British people felt that the queen, who enjoyed a tax-exempt (not taxed) income in the millions, should pay for the restoration. Two days later, Buckingham 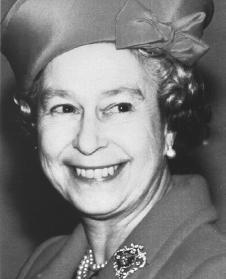 Elizabeth II.
Reproduced by permission of
AP/Wide World Photos
.
Palace announced that the queen and her family would no longer be exempt from taxation. This announcement was seen as a gesture of political smarts and goodwill. The year ended on a happier note, as Princess Anne remarried on December 12.

In 1995 Elizabeth wrote a letter to Prince Charles and Princess Diana urging them to divorce, prompted by separate television interviews where they discussed their unhappy fourteen-year marriage. They were divorced in 1996, as were Prince Andrew and Sarah Ferguson. Despite these very public family problems, Elizabeth generally remained popular.

Her resolve was tested, however, after the August 1997 death of her former daughter-in-law, Princess Diana. Some Britons lashed out at the queen for "being too bound up by protocol [the expected conduct of a king or queen]." Surprised by the criticism, she broke tradition and addressed the nation in a live broadcast the day before the funeral, paying tribute to Diana. This gesture was seen as significant, as the queen usually addressed the nation only on Christmas Day. This was only the second exception to that rule in her forty-five-year reign.

In spite of problems and public stresses, Elizabeth refuses to slow down. She continues to enjoy time with her family, country life, horse-breeding, and horse-racing.

Likewise, Elizabeth continues to practice her royal duties. The queen, as head of state, maintains close contact with the prime minister, with whom she meets weekly. She also receives important foreign office telegrams and a daily summary of events in Parliament. She hosts both British and foreign leaders and receives other notable visitors from overseas. Elizabeth also heads the navy, army, and air force of Great Britain. In addition, she succeeded her father as colonel in chief of all the Guards Regiments and the Corps of Royal Engineers, as well as captain-general of the Royal Regiment of Artillery and the Honorable Artillery Company. She is president or financial supporter of more than seven hundred organizations. In 1998 some of her many activities included officially opening the new British Library in London, unveiling a statue of former Prime Minister Winston Churchill (1874–1965) in Paris, meeting with former Far East prisoners of war, and conducting state visits to Brunei and Malaysia.

The year 2002 marked the fiftieth anniversary of Elizabeth II's rise to the throne. On February 6 in that year, she delivered her Golden Jubilee message to the United Kingdom. Elizabeth II is only the fifth monarch to celebrate a Golden Jubilee.

may the Lord bless you Queen Elizabeth and your beautiful family