Growing up without freedom

Frederick Douglass was born in February 1817 on the eastern shore of Maryland. His exact date of birth remains unknown. His mother, from whom he was separated at an early age, was a slave named Harriet Bailey. She named her son Frederick Augustus Washington Bailey. He never knew or saw his father. Frederick took the name Douglass much later. As a slave, Douglass was not allowed to have much of a childhood. He was separated from his parents, and he was forced to work hard and suffered cruel treatment while working on the property of Captain Aaron Anthony. In 1825 Anthony, who often hired his slaves out to others, decided to send Douglass to Baltimore, Maryland, to live with a man named Hugh Auld and his family.

Douglass's life improved somewhat while working for the Aulds. Mrs. Auld was a northerner, and northern slaveholders generally did not treat their slaves as badly as people in the South did. She even taught young Douglass the basics of reading and writing until her husband stopped her. Even though things were a little better than they had been, Douglass was still unhappy with his situation and began to think of ways to change it.

After the death of Captain Anthony, Douglass became the property of Anthony's son-in-law. He was then hired out to a professional slave breaker, a man who would beat and mistreat slaves until they gave up and did whatever they were told. After weeks of being whipped, Douglass finally fought back; after that the whippings stopped. The Aulds then brought him back to Baltimore and put him to work in the shipyards. There in 1838 he borrowed the identification papers of an African American sailor. By passing himself off as the sailor, he was able to escape to New York. He adopted the name Douglass and married a free African American woman from the South. They settled in New Bedford, Massachusetts, where several of their children were born.

Douglass tried to make a living doing manual labor, and he quickly became involved in the antislavery movement that was gaining strength in the North. In 1841, at an abolitionist meeting in Nantucket, Massachusetts, he delivered a moving speech about his experiences as a slave and was immediately hired by the Massachusetts Antislavery Society to give lectures. Douglass was an eloquent speaker; that is, his speeches were well thought out and forceful, and he was able to inspire those who heard him. Some Harvard students who had heard him speak were so impressed that they persuaded him to write an autobiography (the story of his life). The Narrative of the Life of Frederick Douglass was published in 1845. (Ten years later an enlarged autobiography, My Bondage and My Freedom, appeared. His third autobiography, Life and Times of Frederick Douglass, was published in 1881 and enlarged in 1892.) Publishing 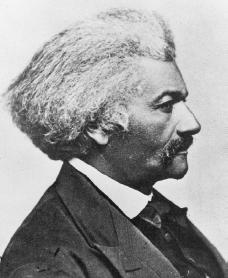 Frederick Douglass.
Courtesy of the
National Archives and Records Administration
.
the book was a dangerous move for Douglass, since it called attention to him and placed him in danger of being recaptured and returned to slavery.

Fearing capture, Douglass fled to Britain, staying from 1845 to 1847 to speak on behalf of abolition and to earn enough money to purchase his freedom once he returned to America. Upon his return Douglass settled in Rochester, New York, and started a newspaper, North Star, which called for an end to slavery. The paper would continue to be published under various names until 1863. In 1858, as a result of his fame and position as the voice of African Americans, Douglass was sought out by abolitionist John Brown (1800–1859). Brown asked Douglass to help him in an attack on an arsenal in Harpers Ferry, Virginia, which he thought would help the antislavery cause. Douglass, however, could see no benefit from Brown's plan and refused to lend his support.

The end of the Civil War and the freeing of the slaves did not mean that Douglass was able to rest. The Reconstruction period, as the years after the Civil War came to be known, presented a new set of challenges for the country. While slavery had ended, the racism (unequal treatment based on race) that went along with slavery was still in place. Some Southerners even went to court to try to overturn the slaves' emancipation (freedom). In 1870 Douglass and his sons began publishing the New National Era newspaper in Washington, D.C. He used the newspaper to make statements on these issues.

In 1877 Douglass was appointed by President Rutherford B. Hayes (1822–1893) to the post of U.S. marshal for the District of Columbia. From this time until approximately two years before his death Douglass held a succession of offices, including that of recorder of deeds for the District of Columbia and minister to the Republic of Haiti. He resigned his assignment in Haiti when he discovered that American businessmen were taking advantage of his position in their dealings with the Haitian government.

Frederick Douglass died in Washington, D.C., on February 20, 1895. He had played a major role in changing history. After reaching his goal of escaping slavery, he could have lived out his days as a free man. Instead he risked it all by speaking out in favor of freedom and improved treatment for all African Americans.

The end of the Civil War and the freeing of the slaves did not mean that Douglass was able to rest. The Reconstruction period, as the years after the Civil War came to be known, presented a new set of challenges for the country. While slavery had ended, the racism (unequal treatment based on race) that went along with slavery was still in place. Some Southerners even went to court to try to overturn the slaves' emancipation (freedom). In 1870 Douglass and his sons began publishing the New National Era newspaper in Washington, D.C. He used the newspaper to make statements on these issues.
2
dude

the life of Frederick Douglass
he was born in 1818 and he died in 1895. he was an American author at some point in his life. Frederick was an American slave in 1845. you can find a collection of his speeches. Frederick published many newspapers. Frederick became a leader of a movement. he became many and he also became a major speaker. after the civil war he remained very active in Americas struggle. Frederick bought a two story home in Rochester, New York. he began a second career. A friend of his from England arrived to help him with his financial problems. Frederick was a brilliant speaker. he began publishing an anti slavery paper called North Star. he was one of Americas first great African American. He fought for the adoption of Constitutional Amendments.