Spanish-born tenor (the highest natural male voice) Placido Domingo's performances are intelligent and dramatic. He is also a conductor and an accomplished pianist.

Placido Domingo was born in Madrid, Spain, on January 21, 1941. His parents, Placido Domingo Sr. and Pepita Embil Domingo, met while performing in a zarzuela. (Zarzuela is a form of Spanish theater combining musical numbers with spoken dialogue.) His father played the violin and sang baritone roles (the middle range of the male voice, between tenor and bass) until he damaged his voice while singing with a cold. His mother was a singer who had made her first performance in Spain's most important opera house, the Teatro Liceo in Barcelona, Spain. In 1946 Domingo's parents joined a zarzuela company that eventually traveled to Mexico. Attracted to the country, Domingo's parents stayed and established their own company in Mexico City, Mexico.

Domingo began studying the piano shortly after the family moved to Mexico City, first privately and later at the National Conservatory. He also studied conducting. Domingo played soccer at his high school, the Instituto Mexico, and he also tried his hand at bullfighting. At the age of sixteen he met and married a fellow piano student. A son was born within the year, and shortly thereafter the couple separated.

In 1957 Domingo began singing baritone roles with his parents' zarzuela company. His early career also included a production of My Fair Lady, of which he gave 185 performances without interruption. In 1959 Domingo tried out for the National Opera (Mexico) as a baritone, but he was asked to sing something in the tenor range instead. He was hired as a tenor comprimario (singer of secondary roles) and as a coach for other singers. He also played piano for a ballet company to make extra money and appeared on a Mexican television program, playing the piano to accompany portions of zarzuelas, operas, and musical comedies.

The number of Domingo's opera appearances increased steadily, and in November 1961 he made his first American appearance with the Dallas Civic Orchestra. In 1962 he married Marta Ornelas, who had been voted the best Mexican singer of the year. Before their marriage, they, along with baritone Franco Iglesias, formed an opera company that toured Mexico. At the end of 1962 they signed a six-month contract with the Hebrew National Opera in Tel Aviv, Israel. The operas performed there featured an international cast. A performance of La Traviata, for instance, included a baritone singing in Hungarian, a soprano (the highest female voice) in German, a tenor in Italian, and the chorus in Hebrew. Domingo's company stayed in Tel Aviv for over two years.

After leaving Tel Aviv, Domingo was hired by the New York City Opera. His first show was scheduled for October 21, 1965, in Carmen, but four days before the show he was asked to fill in in Madame Butterfly for a tenor who was sick. Domingo's official Metropolitan Opera debut came in September 1968, when he substituted for Franco Corelli in Adrianna Lecouveur a week before his scheduled 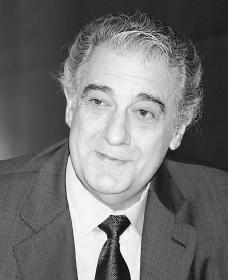 Placido Domingo.
Reproduced by permission of
Getty Images
.
appearance. Domingo pursued conducting opportunities whenever possible, including a New York City Opera production of La Traviata during the 1973–74 season. He also appeared in film versions of several operas during the 1980s, and he organized benefit concerts that raised millions of dollars to help victims of a 1985 earthquake in Mexico.

During the 1990s Domingo achieved huge success with his Three Tenors performances with Jose Carreras (1946–) and Luciano Pavarotti (1935–). In 1994 1.3 billion people viewed their concert in Los Angeles, California, on television, and they sold more than ten million compact discs and videos. In 1996 Domingo became the artistic director of the Washington Opera while launching the Three Tenors World Tour, which brought opera to four continents and continued through 1997.

In 1998 Domingo agreed to take over as the artistic director of the Los Angeles Opera, beginning in 2000. In 1999 he set a record with his eighteenth opening night performance at the Metropolitan Opera House in New York City. In December 2000 Domingo received a Kennedy Center Honor for lifetime achievement from U.S. president Bill Clinton (1946–). Domingo was praised for his efforts to expand the audience for opera and to help those less fortunate around the world.

In September 2001 Domingo performed at a service in Yankee Stadium in New York City for victims of the September 11 terrorist attacks on the United States. In December of that year there was concern when Domingo, while performing in Otello in Milan, Italy, faltered and had to leave the stage briefly. He returned after a few moments, however, and completed the rest of the show.