The French painter and sculptor Edgar Degas is classed with the impressionists (a painter who tries to represent a scene using dabs and strokes of paint) because of his concentration on scenes of contemporary life and his desire to capture the transitory (lasting a short time) moment, but he surpassed other impressionists in compositional (arrangement) sense.

Hilaire German Edgar Degas was born on July 19, 1834, in Paris, France, the son of a well-to-do banker. From an early age Edgar loved books, especially the classics, and was a serious student in high school. He was very attached to his younger brother, René, and he would later paint his image repeatedly. He was also fond of his mother, and her death when he was thirteen years old caused him much heartache. His father hoped Edgar would study law, but Edgar enrolled at the École des Beaux-Arts (School of Fine Arts) in 1855. Degas always valued this early classical training. He had a great and enduring admiration for Ingres (1780–1867), a painter with a decisively linear orientation (characterized by a reliance on simple lines and brushstrokes).

In 1856 Degas went to Italy and settled in Rome for three years. He admired the early Christian and medieval masterpieces of Italy, as well as the frescoes (paintings done on fresh plaster), panel paintings, and drawings of the Renaissance (a period in Italy from roughly the fourteenth century until the seventeenth century that was marked by a renewed interest in the arts) masters. He copied many of these. At that time this was a common way of studying art.

Back in Paris in 1861, Degas executed a few history paintings (a painting that depicts a historical event; then regarded as the highest branch of painting). Among these was the Daughter of Jephthah (1861), which is based on an episode from the Old Testament in the Bible. He copied the works of the old masters (the well-regarded painters of the Renaissance) in the Louvre (a famous art museum in Paris). His reputation as a painter had already been established prior to the 1870s.

From 1862 until 1870 Degas painted portraits of his friends and family. In 1870, during the Franco-Prussian War (a conflict between France and the German state of Prussia), he served in the artillery (the part of the army that deals with weaponry) of the national guard. Degas stopped exhibiting at the respected Salon in 1874 and instead displayed his works with those of the less well-established impressionists until 1886. Although he was associated with the impressionists, his preoccupation with drawing and composition was not characteristic of the group. 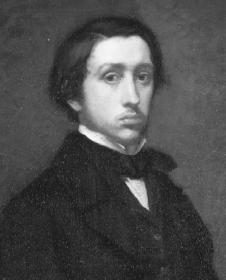 Portraiture (the creation of portraits) was more important for Degas than for any of the other impressionists. Some of his portraits are among the best produced in Western art since the Renaissance. Examples include The Belleli Family (1859), Head of a Young Woman (1867), Diego Martelli (1879), and Estelle Musson (1872–73).

Depiction of the modern scene

By 1870 Degas drew his characters from the contemporary Parisian scene, especially the ballet, theater, and racetrack. Usually he depicted ballerinas off guard, showing them backstage at an awkward moment as they fastened a slipper or drooped, exhausted, after a difficult practice session. Degas fits easily within the impressionist movement in producing art of immediacy (directness) and spontaneity (being unprepared or unplanned). But the placement of each detail is calculated in terms of every other to establish balances that are remarkably clever and subtle.

Degas thought of the human figure as a prop to be manipulated to achieve more interesting paintings. He was inspired by Japanese prints to create unusual poses and cut off figures in unusual ways. In A Carriage at the Races (1873) the figure in the carriage to the left is cut nearly down the middle. Had Degas shown more of this figure, an obvious and uninteresting symmetry (arrangement that is similar on both sides) would have been set up with the larger carriage in the right foreground.

In copying the old masters, Degas sometimes attempted to uncover their techniques. For example, when he copied Andrea Mantegna (1431–1506), Degas tried to copy Mantegna's method of building up the canvas with layers of cool and warm tones by using a series of glazes (thin, smooth, shiny coats).

From the mid-1870s Degas worked increasingly in pastel (pale, light crayons). In his last years, when his sight was failing, he abandoned oil completely in favor of pastel, which he handled more broadly and with greater freedom than before. Pastel, for the most part an eighteenth-century medium, helped Degas produce qualities of airiness and lightness, as in the Ballerina and Lady with Fan (1885). However, Degas experimented with unusual combinations of mediums in producing his colors and prints.

After 1866 Degas created bronze statues of horses and dancers, up to three or four feet high. His bronze and painted wax figures of dancers, like the Little Dancer of Fourteen Years (1880–81), are often clothed in real costumes. Degas again catches the dancers as they are about to change position. As in the paintings, Degas strips the dancers of glamour and sometimes reveals them as scrawny adolescents.

Beginning in the mid-1870s Degas suffered from failing eyesight. From the 1890s on, he became more and more of a recluse (one who lives in isolation). In the last years of his life he was almost totally blind, and he wandered aimlessly through the Parisian streets. He died on September 27, 1917, in Paris.

Degas was interested in combining the discipline apparent in classical art with the direct expression of contemporary life that characterized the impressionists. However, he did not share the impressionists' focus on light and color. He emphasized composition, line, and form. He is regarded as one of the greatest French artists, influencing later artists such as Toulouse-Lautrec (1864–1901) and Pablo Picasso (1811–1973).

Check the dates on Picassos life span i think you got them wrong.