Ossie Davis is a leading African American playwright, actor, director, and television and movie star. He was a part of the civil rights movement and helped lead the way for a new generation of African American film directors.

Ossie Davis was born in Cogdell, Georgia, on December 18, 1917, the oldest of five children of Kince Charles Davis and Laura Cooper Davis. He grew up in Waycross, Georgia. His father was a railroad construction engineer who entertained his family by telling stories. While still attending Central High School in Waycross, Davis decided to become a writer after witnessing how badly prejudiced white people treated his father. At Howard University in Washington, D.C., Davis was encouraged to pursue an acting career. He left college after his junior year and joined an acting group in Harlem in New York City. He also took part in the American Negro Theater, founded there in 1940.

Davis made his debut in the play Joy Exceeding Glory (1941). In 1942 he was drafted into the U.S. Army to serve during World War II (1939–45; a war fought between the Axis—Germany, Italy, and Japan—and the Allies—Great Britain, France, the Soviet Union, and the United States). He worked in Liberia with the Medical Department and also wrote and produced shows. After the war he returned to the stage, playing his first Broadway role in Jeb (1946). While performing in this show he met actress Ruby Dee (1924–), and they were married two years later.

Davis's first movie role was in No Way Out (1950). This was followed by Broadway performances in No Time for Sergeants, Raisin in the Sun, and Jamaica. Other movie roles included The Cardinal, Shock Treatment, and Slaves. He was also one of the first African American actors to work regularly in television, appearing in dramas and on such regular series as The Defenders and The Nurses. Davis also wrote television scripts.

Davis and Ruby Dee acted together many times on the stage, in television, and in movies. They starred in Davis's own play Purlie Victorious (1961) and in the movie based on it, Gone Are the Days. Purlie Victorious was published and also reprinted in collections of plays. Davis went on to coauthor the musical version of the play, Purlie (1970), which enjoyed great success during its Broadway run.

In the late 1960s Davis became one of the few African American film directors when he worked on Cotton Comes to Harlem and other films. With Ruby Dee he appeared on stage and television, reading the poetry of famous African Americans, and he made recordings of African American literature. One of his most famous moments was his tribute to Malcolm X (1925–1965) in 1965, when he called the slain Muslim leader "Our Shining Black Prince." Davis also frequently 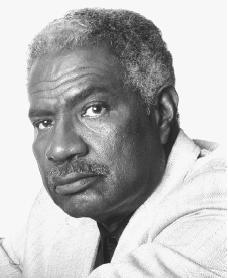 Ossie Davis.
Reproduced by permission of the
Artists Agency
.
gave lectures and readings at universities and schools.

Davis's published essays include "The Wonderful World of Law and Order," "The Flight from Broadway," and "Plays of Insight Are Needed to Make the Stage Vital in Our Lives." He also wrote the play Last Dance for Sybil and a musical version of Mark Twain's Pudd'nhead Wilson.

Davis has a deep love for his people. He is an example of African American pride, and he devoted much time and talent to the civil rights movement (a mass movement starting from the mid-1900s that led to the end of segregation [separation based on race] and equal rights for African Americans) in America. He received a number of awards, including the Mississippi Democratic Party Citation, the Howard University Alumni Achievement Award in dramatics, and the Frederick A. Douglass (c. 1817–1895) Award (with Ruby Dee) from the New York Urban League. The Davises have three children and make their home in New Rochelle, New York.

In his later years Davis has remained very active, mostly in television. He appeared on the Public Broadcasting System (PBS) program With Ossie and Ruby, as well as on the popular series Evening Shade. He also helped pave the way for a new generation of African American film directors, led by Spike Lee (1957–). Davis performed in three of Lee's films, including Do the Right Thing (1989). Davis even tried his hand at writing fiction. His novel Just Like Martin, a tribute to the civil rights movement, was published in 1992.

In January 1999 Davis and his wife Ruby Dee celebrated fifty years of marriage at a benefit for community theaters in New York City. Later that year they were among several people arrested while protesting the shooting of an unarmed West African immigrant by New York City police officers. In 2001 Davis and Dee were honored with a Screen Actors Guild Lifetime Achievement Award at ceremonies held in Los Angeles, California.