The Dalai Lama is the fourteenth leader in a line of Buddhist spiritual and political leaders of Tibet. Buddhists are followers of Gautama Buddha (c. 563–c. 483 B.C.E. ), who believed the troubles of this life can be overcome through moral and mental discipline. The Dalai Lama fled his country and took safety in India in 1959 during the revolt against Chinese control of Tibet. Since that time, while still in exile (a forced or a voluntary absence from one's country), he has promoted Tibetan religious and cultural traditions.

The name given the Dalai Lama when he was born on July 6, 1935, was Lhamo Thondup. He came from a very small village in northeast Tibet called Taktser. At that time there were only twenty families living in all of Taktser. "Dalai Lama" is a name of honor and respect that was given to him by the Buddhist monks of Tibet. "Lama" means "teacher" or "wise person." "Dalai" means "ocean." When put together Dalai Lama is translated as "Ocean of Wisdom."

The young Dalai Lama's parents were farmers who raised sheep and grew barley, buckwheat, and potatoes. In addition to Lhamo there were six other children in the family, four boys and two girls.

How he was discovered

The thirteenth Dalai Lama died in December of 1933. When he died, the Buddhist monks prayed for guidance to find the new Dalai Lama. They felt signs and oracles (divine answers or prophecies) would lead them to him. They finally received a vision that the new Dalai Lama would be found in the northeast part of Tibet. He would be living in a house that had strange gutters and that was near a monastery (a place where monks live and pray).

Many monks went out on the journey. After much searching, a group of them came to the village of Taktser, which has a monastery nearby. There they found Lhamo at his house, which had strangely shaped gutters. They spoke to him and to his parents and performed a test. The monks had brought several items with them from their home monastery. Some of the items had belonged to the thirteenth Dalai Lama and others were imitations or just common objects. Lhamo correctly identified the objects that had belonged to the thirteenth Dalai Lama. The monks knew they had found the reincarnation of their leader. Lhamo was two years old at the time.

The monks took Lhamo to a monastery in Kumbum, Tibet. For two years he was given the basic education he would need to lead his country both spiritually and politically. After this he was brought to the Potala palace in Lhasa, the capital of the country. The Potala palace is a structure of over one thousand rooms built into a mountain. There he took his place on the Lion Throne, a richly carved, wooden throne covered with jewels. He was only four years old on February 22, 1940, when the monks declared that he was the new Dalai Lama. He took the name Jamphel Ngawang Lobsang Yeshe Tenzin Gyatso 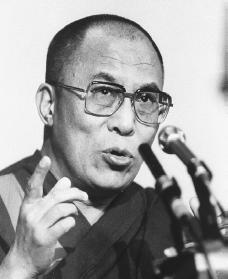 Dalai Lama.
Reproduced by permission of
AP/Wide World Photos
.
in honor of lamas who had served before him. Since then, however, he has only used a shortened version of that name for himself—Tenzin Gyasto.

The monks at the Potala palace gave the Dalai Lama private instruction. His only classmate was one of his brothers. According to a long-standing tradition, when the young Dalai Lama misbehaved in class, it was his brother who was punished. Over the years the Dalai Lama learned penmanship, history, religion, philosophy, Tibetan medicine, art, music, and literature, among many other subjects. Throughout all of his study he attended meetings of the government.

The Dalai Lama loved working with mechanical things. He spent a great deal of time with his telescope. He enjoyed taking watches and small machines apart and putting them back together. There were only four cars in all of Tibet at that time and three belonged to the thirteenth Dalai Lama. Tenzin Gyatso loved working with the engines and trying to drive the cars.

The Dalai Lama took over the political leadership of Tibet in November 1950, not long after the Chinese Communist army invaded the country. (Communism is a political system based on the belief that property should not be owned by any individual but should belong to everyone in common. Communists also believe that all business should be under the control of the government.) The Dalai Lama was fifteen years old and leading a country on the brink of crisis.

Mainland China had become a communist nation in 1949 after World War II (1939–45; a war in which the Allies, including France, Great Britain, the Soviet Union, and the United States, defeated the Axis forces of Germany, Italy, and Japan). Mao Zedong (1893–1976) led communist China. Eighty thousand members of the Chinese army invaded Tibet in early 1950. The Chinese said the people of Tibet invited the army to save them from the rule of a cruel government. The Chinese also claimed that Tibet was originally a part of China.

Neither of these statements were true. The Dalai Lama visited with the Chinese to ask them to leave Tibet. They would not. He visited neighboring countries to try to get help to push the invaders out. The other countries, however, were afraid of what might happen to them if they opposed a nation as powerful as China, and they offered little support. After years of trying to negotiate with the Chinese and seeing his people suffer under Chinese rule, the Dalai Lama finally fled to India in April 1959. He has been away from his native Tibet since then.

His life after exile

The Dalai Lama learned Buddhist thought and practice as part of his monastic (done by monks or nuns) training. The people of Tibet still consider him to be their spiritual and political leader. Since his exile he has worked tirelessly to help Tibetans who have managed to flee their country. He has worked with many Westerners for the cause of returning Tibet to its own people.

The Dalai Lama's contact with Westerners has broadened his interest beyond Buddhism. He has given many speeches and written several books. In them he discusses how religions are similar in their development of love and compassion and in their pursuit of goodness and happiness for all beings. He is greatly admired, not just by Buddhists, but by people everywhere. He speaks not only of spiritual matters, but also of global peace and environmental concerns. His thoughts are received as popular and universal messages.

The Dalai Lama remains an active and revered humanitarian (someone who believes in human welfare and social reform) throughout the world, even though an intestinal illness he suffered in January 2002 caused him to cut back on his schedule. He has spent much of his time traveling, speaking against communism, and working for peace. He has a devoted following that includes individuals from all over the world and from all walks of life. His struggles for peace and freedom have made him one of the most recognized and well-regarded political and spiritual leaders in the world.

A very good article but it should have been more better if the article contained biography of the Dalai Lamas from the 1st to the 14th- Om mane peme hung.