Bill Clinton won the 1992 Democratic presidential nomination and defeated George Bush to become the forty-second president of the United States. He was elected to a second term in 1996. As a former president, Clinton continues to work for a variety of issues that became important to him during his political career.

William Jefferson Clinton was born in Hope, Arkansas, on August 19, 1946. He was a fifth-generation Arkansan. His mother, Virginia Kelly, named him William Jefferson Blythe III after his father, who died in a car accident before his son's birth. When Bill was four years old, his mother left him with her parents while she trained as a nurse.

When Bill was eight, his mother married Roger Clinton. The family moved to Hot Springs, Arkansas, where they lived in small house with no indoor plumbing. Bill's stepfather was an alcoholic, and family life was frequently disrupted by domestic violence. When he was fifteen, Bill warned his stepfather never to hit his mother or half-brother, Roger Jr., again. "That was a dramatic thing," Clinton recalled years later in an interview with Time magazine. Despite his rocky relationship with his stepfather, Bill changed his last name to Clinton as a teenager.

When Clinton was seventeen, he met then President John F. Kennedy (1917–1963). As a result, Clinton decided that he wanted a career in politics. He entered Georgetown University in 1964. As a college student, he was committed to the movement against the Vietnam War (1955–75; a war in Vietnam in which South Vietnam, assisted by the United States, fought against a takeover by North 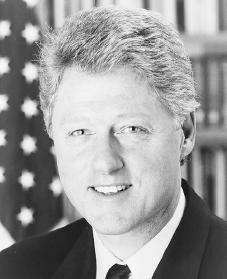 Bill Clinton.
Reproduced by permission of the
White House
.
Vietnam), as well as to the civil rights struggle. Clinton graduated from Georgetown in 1968 with a degree in international affairs. He was awarded a Rhodes scholarship, which allowed him to spend the next two years continuing his studies at Oxford University. In 1970 he entered law school at Yale University. After graduation, Clinton went into private practice as a lawyer in Fayetteville, Arkansas. He also began teaching at the University of Arkansas Law School.

In 1974 Clinton decided to begin the political career that he had wanted since he was a teenager. He ran for Congress, but lost the election in a very close vote. On October 11, 1975, Clinton married Hillary Rodham (1947–), whom he had met when they were fellow law students at Yale. In 1976 he was elected attorney general of Arkansas, an office he held from 1977 to 1979.

In 1978 Clinton ran for the office of governor of Arkansas. His election made him the youngest-ever governor of that state. In his first term Clinton tried to make numerous changes, many of which were extremely unpopular, including an attempt to raise the cost of vehicle licenses. In 1980 he ran for reelection as governor but lost to Republican Frank White (1933–). When Clinton campaigned for election in 1982 against White, he explained that he had learned the importance of adaptability and compromise. He received 55 percent of the vote and once again became governor of Arkansas.

While Clinton was governor of Arkansas, he pushed for the reform of schools, health care, and welfare. He also continued to be active in Democratic national politics. In 1991 he was voted most effective governor by his peers and was chosen to head the Democratic Leadership Conference. That same year Clinton announced that he was entering the 1992 race for president.

Clinton had much competition for the Democratic nomination for president. He came from a small state that many people thought of as unsophisticated and underdeveloped. Critics felt that his lack of experience in national government gave him little understanding of foreign policy. Clinton, however, insisted that he had a fresh point of view to bring to government.

Clinton's campaign was also marked by personal scandal. He faced charges of extramarital relationships and questions about his avoidance of military service during the Vietnam War. Clinton remained in the race, however, and became the Democratic nominee, selecting Senator Albert Gore (1948–) as his running mate. Clinton focused his campaign on economic issues, especially unemployment and health care. In November 1992 Clinton was elected president, defeating both the president then in office, Republican George Bush (1924–), and independent candidate Ross Perot (1930–).

Once in office Clinton continued to work on economic issues, and interest rates and unemployment began to drop. He also appointed his wife to be the head of a task force to explore national health care reform. He supported the 1993 North American Free Trade Agreement (NAFTA), which made a single trading unit of the United States, Canada, and Mexico.

As the end of Clinton's first term approached, a new scandal arose. The scandal was called Whitewater, after the suspicious deal in which Clinton and his wife had bought land along the Whitewater River in Arkansas. In 1996 Clinton was elected to a second term as president. He won the election by a landslide, defeating his Republican opponent, Senator Robert Dole (1923–), with 49 percent of the popular vote and 379 electoral votes. Clinton's second term, however, became overshadowed by the investigation into Whitewater of lawyer Kenneth Starr (1946–).

The investigation became more serious when charges of Clinton's affair with Monica Lewinsky (1973–), a White House intern, were made public. At first Clinton denied the affair, but he later stated that he had been in an inappropriate relationship with Lewinsky. On December 19, 1998, the House of Representatives ruled to impeach Clinton, or try him in Congress for charges of lying under oath about his relationship with Lewinsky. The Senate then conducted an impeachment trial. Clinton was only the second president in U.S. history to face a Senate impeachment hearing. On February 12, 1999, the Senate found Clinton innocent. He apologized to the American people and to Congress for what he had done.

Clinton became the first U.S. president to address Russia's Duma, or lower house of parliament, on June 5, 2000. In his speech, he said that Russians did not need to fear America's missile defense program and that their future would be vital to the twenty-first century. Later that month, he signed into law a long-awaited e-signatures bill, which gave on-line "electronic" signatures the same legal status as handwritten signatures.

The Whitewater investigation was concluded on September 20, 2000, with a statement that there was not enough evidence to prove that either Clinton or his wife had taken part in any criminal wrongdoing.

On October 16, 2000, Clinton attended an emergency meeting with Israeli Prime Minister Ehud Barak (1942–) and Palestinian leader Yasir Arafat (1929–), who wanted to come to an agreement to end ongoing violence in their countries. Barak and Arafat left the meeting with a "statement of intent" to end the violence, but neither side was completely satisfied. In that same month, Clinton sealed a major achievement of his administration by signing a bill which gave China permanent, normal trade status. This was considered the most important U.S. trade legislation since the passage of the North American Free Trade Agreement in 1993.

Later that year, Clinton signed into law a bill that set the blood-alcohol limit for drunkenness at 0.08 percent. This was a stricter level than most states had used previously. Supporters of the bill said that this national standard, which is used to determine whether or not a driver is legally drunk, could save hundreds of lives every year. Clinton signed another important bill into law in 2000, when he permanently established a separate reserve of heating oil for the Northeast. The law made it easier for the White House to withdraw oil from reserves in case of emergency. Finally, on November 13, 2000, Clinton began a historic journey to Asia, becoming the first American president to visit Vietnam since the Vietnam War. The purpose of the visit was to work on relations between Hanoi (the capital of Vietnam) and Washington, D.C.

On January 19, 2001, Clinton's last day as president, he publicly admitted that he gave misleading testimony in the Lewinsky investigation. He faced no criminal charges, but his license to practice law was suspended. Clinton was also ordered to pay a $25,000 fine and admit that he had broken one of the Arkansas Bar's rules of conduct.

Clinton continues to raise money for and speak on behalf of many issues. The many causes to which he devotes time and money include the economic development of small businesses, City Year (a national service program for young people), and acquired immune deficiency syndrome (AIDS; a disease of the immune system) research and education.

Despite the scandals and difficulties that plagued the second half of his presidency, Clinton continues to be an active public figure, supporting many issues and causes that are important to the world. The youngest president since John F. Kennedy, he has come a long way from his small childhood home in Arkansas.