Lifelong activist Benjamin Chavis Muhammad overcame racial injustice and wrongful imprisonment to become a vocal leader in the civil rights movement, which pressed for equality between the races.

Benjamin Franklin Chavis Jr. (he took the last name Muhammad later in life) was born in 1948 in Oxford, North Carolina, into a long and distinguished line of preachers. His parents were Benjamin Chavis Sr. and 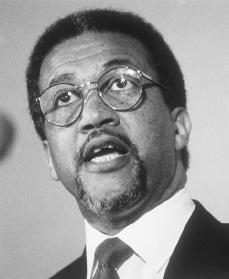 Benjamin Chavis Muhammad.
Reproduced by permission of
AP/Wide World Photos
.
Elisabeth Chavis. He grew up the only son in a family of four children. His great-great-grandfather, John Chavis, is considered to be the first black graduate of Princeton University, because he graduated from a New Jersey seminary (religious school) that later became the university. John Chavis, according to Benjamin, was killed in 1838 for teaching slave children to read and write.

In the mid-twentieth century, even as the walls of segregation (the act of separating people based on race) began to crumble, the worldviews of civil rights leaders like Chavis Muhammad and Martin Luther King Jr. (1929–1968) were shaped against this back drop of hatred and bigotry (intolerance of nonwhites). Chavis became involved in his church, finding shelter from such hostile attitudes.

Chavis attended school at the North Carolina Colored Orphanage, where his mother worked as a teacher. His father made him a member of the National Association for the Advancement of Colored People (NAACP) when Chavis was twelve.

Benjamin Chavis Muhammad's first act of protest against racial injustice came when he was a wide-eyed thirteen year old. On his way home from school each day, Chavis Muhammad would pass a whites-only library in Oxford, North Carolina. One day, tired of tattered hand-me-downs and desirous of a book with two intact covers on it, he boldly walked into the library. The librarians told him to leave, but he questioned that demand. "He asked why," a childhood friend told the New York Times. "A lot of us when we were told to go away … would just do so, but Ben would always challenge, always ask why." The librarians called his parents, but the incident, like the spunkiness of the boy at its center, could not be calmed and tempers flared. In a short time the library was opened to all races. A child's simple act of disobedience and intellectual curiosity had shattered the overt racism of an institution whose sole mission, young Chavis Muhammad knew, should have been the enrichment of minds—those of blacks and whites.

In 1968—the year of King's assassination, which some observers feel brought an end to the modern civil rights era—Chavis Muhammad became a field officer for the United Church of Christ's Commission for Racial Justice. The Commission was organized in 1963 in response to the assassination of civil rights activist Medgar Evers (1925–1963) and the infamous Birmingham, Alabama, church bombing that killed four African American schoolgirls in 1963. The Commission coordinated racial justice strategies for national and regional organizations and led community organization and criminal justice campaigns.

In February of 1971 Chavis Muhammad was in Wilmington, North Carolina, to drum up support for a school desegregation lawsuit that had been brought by the NAACP. On a night of racial violence, Mike's Grocery, a white-owned store in a black part of town, was firebombed. A year later, the Wilmington 10 (as the nine black men, including Chavis Muhammad, and one white woman came to be known) were convicted of arson (illegally starting a fire) and were sentenced to a combined total of 282 years in prison. The lengthiest term, thirty-four years, was slapped on Chavis Muhammad.

World focused on his imprisonment

The case immediately attracted worldwide attention and became a celebrated focus of the civil rights movement in the United States. Defense attorneys pointed out 2,685 errors in the trial, but appeals were denied. The Wilmington 10 went to prison in 1976.

While in prison, Chavis Muhammad, who had been taught by King to see the positive in a negative experience, was frequently escorted in leg irons and handcuffs to Duke University, where he earned a master's degree from the divinity school (religious school) under a study-release program. A hard-working student, Chavis Muhammad dodged the prison's strict, 10 P.M. , lights-out rule by reading his school books in the bathroom, which was lighted all night.

The Wilmington 10 case took a dramatic turn when three key witnesses from the trial admitted they had made up their stories after being pressured by local law enforcement authorities. North Carolina governor James Hunt reduced the sentences but left the convictions intact. Finally, in 1980, after Chavis Muhammad and the other activists had been released, a Justice Department investigation led to a federal appellate court's reversal of the convictions.

By 1985 Chavis Muhammad had been elected executive director of the United Church of Christ's Commission for Racial Justice and soon emerged as a national figure. He organized gang summits (meetings between leaders) to criticize the skyrocketing violence, the school drop-out rate, and rampant drug involvement hurting America's young people. He also participated in mainstream national politics and served as the clergy coordinator (religious coordinator) for the Reverend Jesse Jackson's (1941–) 1984 presidential campaign.

While Chavis Muhammad was at the Commission for Racial Justice, he became associated with the growing environmental movement. In 1983 Chavis Muhammad had joined in a protest against the depositing of tons of contaminated soil in rural Warren County, North Carolina, where the population was 75 percent black and mostly poor. Chavis Muhammad, educated in school as a chemist and in the streets as an activist, saw the political issue clearly: industry's garbage was being passed off on the lower class, politically helpless members of society. Although the protest failed at getting the landfill removed, it did stop further landfills being added to Warren County.

Coining the term "environmental racism," Chavis Muhammad ordered a study that documented the extent of the crisis: three of the five largest toxic waste landfills in the country were in minority neighborhoods. He criticized federal, state, and local governments, as well as the mainstream environmental organizations, which were headed by whites and, in his view, cared more about the wetlands than the health of black people.

Chavis Muhammad's speech at the 1987 First National People of Color Environmental Leadership Summit cast much needed light on the environmental devastation destroying minority communities—not only those of African Americans, but of Mexican American farmers, Native Americans, and the peoples of Alaska. Thus he became one of the most visible spokespersons on environmental policy. After the election of President Bill Clinton (1946–) in 1992, Chavis Muhammad served as a senior advisor to the transition team studying the departments of Energy, the Interior, and Agriculture, as well as the Environmental Protection Agency.

When Chavis Muhammad won the election in 1993 as the executive director of the NAACP, he proclaimed: "Now is the time for healing. Now is the time for unity." It was soon discovered, however, that Chavis Muhammad had begun setting aside the organization's funds to use for a legal settlement on a sexual harassment case (the verbal or physical mistreatment of a sexual nature). In a twist of events, the NAACP's board of directors fired Chavis Muhammad in 1994. In 1996 a District of Columbia Superior Court ruled that the organization would not have to pay any part of a $332,400 settlement reached in the case.

In a change of religious beliefs, Chavis converted to the Nation of Islam, a religious and cultural organization for African Americans, in February 1997 and took the name Muhammad. Chavis Muhammad's desire to join the Nation of Islam and still remain a minister of the United Church of Christ (UCC) was not allowed. The Eastern North Carolina Association of the UCC voted to terminate Chavis Muhammad's ministerial standing in April 1997. He said that God called him to the Nation of Islam, and that he hoped to unite Christians and Muslims in building a new nation.

Chavis Muhammad continues to work for the rights of African Americans. He was one of the organizers of the Million Family March that took place in Washington, D.C., in 2000.

I'm watching a rerun of Oprah pertaining to the Don Imus termination. Bro Benjamin Muhammad is on panel, but he's referred to as Benjamin Chavis. After acceptance of Islam, I thought he officially changed his name from Chavis to Muhammad. is he nolonger affiliated with the Nation of Islam? and if so, why was he represented as such on Oprah?
2
Bonnie Berry Carter

Do you have a way of getting in touch with Ben Chavis?
His Aunt taught me at Second Ward High in Charlotte North Carolina in the 60's. I would love to talk to him or e-mail him.
Thank You
Bonnie Berry Carter
3
Michael Lockamy

I would love to have Ben Chavis as a guest speaker at our prison facility. He has a message for so many men of color incarcerated today. Is there anybody who can help me get in touch with Mr. Chavis? Please respond ASAP. Thanks.