Filmmaker Frank Capra was Hollywood's top director in the 1930s. He created several immensely popular movies that captured the mood of the Depression-era United States, and he earned more Academy Award nominations than any of his contemporaries.

Frank Capra was born in Palermo, Sicily, Italy, on May 18, 1897, the youngest of Salvatore and Sarah Nicolas Capra's seven children. His father was a fruitgrower. When Frank was six years old his family left Sicily for the United States, ending up in Los Angeles, California. Capra fought to go to college against his parents' wishes, working several jobs to pay his way through the California Institute of Technology. After graduating and serving in the army, he had trouble finding a decent job. His relatives on the other hand, none of whom had college degrees, were all employed. While in San Francisco, California, Capra, with twelve cents to his name, answered a newspaper advertisement placed by an actor who was looking for a director to help him create film versions of his favorite poetry.

Capra turned out films based on poems such as Rudyard Kipling's (1865–1936) "Fultah Fisher's Boarding House." He then sold them to the regular movie studios for a profit. After a series of these, Capra went to work for Harry Cohn, who ran a small company called CBC, which would grow into Columbia Pictures. For a while Capra also worked with Harry Langdon (1884–1944), a famous comedian of the silent movie era. It was with Langdon that Capra made his first feature films, Tramp, Tramp, Tramp, The Strong Man, and Long Pants. All were successful, but Langdon wanted to direct his own movies, so he fired Capra. Capra went back to work for Harry Cohn at Columbia.

Capra turned out a series of action movies that were well made and did very well at the box office. It was in this period that Capra made his first film with sound, The Younger Generation. In 1930 Capra began working with a writer named Jo Swerling after Swerling attacked one of his scripts in front of Harry Cohn. Impressed with Swerling's criticisms, Capra asked Cohn to hire the New York writer. Swerling was an important influence on Capra. Their first film together, Ladies of Leisure, starred Barbara 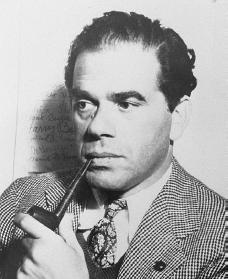 Frank Capra.
Courtesy of the
Library of Congress
.
Stanwyck (1907–1990) and showed Capra developing his personal style.

Although Capra worked regularly with both Swerling and Stanwyck, his breakthrough project came from another writer, Robert Riskin (1897–1955). It Happened One Night won the Academy Award (Oscar) for Best Picture, Best Director (Capra), and Best Actor and Actress (Clark Gable [1901–1960] and Claudette Colbert [1903–1996], respectively). One of the most famous scenes takes place on a broken down bus in which the riders, to entertain themselves, sing "The Daring Young Man on the Flying Trapeze." It is vintage Frank Capra material, offering a vision of a world in which social differences are broken down and a democratic feeling of togetherness is achieved.

Capra's next big film, Mr. Deeds Goes to Town, also written by Riskin, won Capra another Oscar for Best Director. In it Capra's belief in the goodness of the common man shows through more clearly. When Mr. Deeds becomes wealthy through an inheritance, he decides to give a significant part of his fortune to the poor. This leads his family to try to have him declared insane. At his trial, Mr. Deeds, played by Gary Cooper (1901–1961), refuses to speak in his own defense until his own faith in the goodness of humanity is restored. As his faith is restored, so is the audience's, and the film ends happily. In 1938 Capra won his third Best Director Oscar for You Can't Take It With You, an adaptation of a popular play. It is the story of a common woman, played by Jean Arthur, whose love saves the soul of a millionaire's son, played by Jimmy Stewart (1908–1997). It was Capra's first film with Stewart.

The next year Capra and Stewart would make Mr. Smith Goes to Washington, the perfect expression of Capra's political belief that the innocent goodness of one man can overcome the greed and cynicism (distrust) of politicians, industrialists (those who own or manage an industry), and the media. The film ends with the hero's twenty-three-hour speech on the floor of the Senate where he refuses to be defeated. At one point Mr. Smith admits that "the only causes worth fighting for are lost causes."

In Jimmy Stewart Capra found an actor capable of expressing the theme of a common man as hero in a bad situation. A good case can be made that the change in America's self-image caused by World War II (1939–45; a war fought between the Axis—Germany, Italy, and Japan—and the Allies—England, France, the Soviet Union, and the United States) can be seen in the change in Jimmy Stewart's self-image in his two most famous roles for Capra. At the end of Mr. Smith Goes to Washington, Mr. Smith manages to maintain his hopeful attitude, while George Bailey of It's a Wonderful Life goes through a much darker change to find happiness. Capra's last film before the United States entered the war was Meet John Doe, starring Gary Cooper.

During World War II Capra entered the armed services and made propaganda (ideas spread to further a cause or belief) films for the Allies. They were considered the finest films made on the Allied side. After the war Capra started his own film company, Liberty Films Inc. It was then that he made It's a Wonderful Life, the story of an extraordinary but deeply discouraged man who, around Christmas, is allowed to see what the world would have been like if he had never been born. The film would become one of the classics of the American screen, but when it was released, it was not a success. His next film, State of the Union with Spencer Tracy (1900–1967) and Katherine Hepburn (1907–), was a mean-spirited and confusing political picture that did nothing to bolster Capra's sagging reputation.

Capra made only five more films, and none was comparable to the artistic success of his earlier efforts or of It's a Wonderful Life. He made his last film, Pocketful of Miracles, in 1961. It was another box office disappointment, and from then until his death in 1991 he never got behind the camera again. In 1971, he published his autobiography, The Name Above the Title.

Although Frank Capra does not have a reputation among critics equal to those of other directors, his best films are still popular with audiences, especially with young people who identify with Capra's heroes. In the end it is probably his simple vision—combined with a mastery of the film form itself—that has made him so enduringly popular.