Lázaro Cárdenas was a Mexican revolutionary leader and president. During his administration he carried out major land reforms that benefited the Mexican people and brought the country's oil industry back under Mexican control, thus restoring the people's faith in the revolution.

Lázaro Cárdenas was born of mixed white and Tarascan Indian ancestry in Jiquilpán de Juárez in the state of Michoacán, Mexico, on May 21, 1895. The oldest son of a shopkeeper, he left school after fourth grade to work in a tax office. As a young man Cárdenas was quiet and serious. After his father died in 1911, he became the father figure for his seven brothers and sisters, several of whom would follow him into military and political careers.

Cárdenas was a fierce and ambitious patriot and was greatly affected when the Mexican Revolution (1910–11) broke out. During this time Cárdenas was working at a local jail in order to support his family. In 1913 he released his prisoners and together they joined the 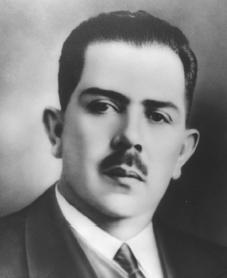 Lázaro Cárdenas.
Courtesy of the
Library of Congress
.
maderistas, the rebels resisting the government of General Victoriano Huerta (1854–1916).

After the Convention of Aguascalientes, Cárdenas fought briefly in the army of Pancho Villa (1878–1923), who also was fighting against Huerta. In 1915 Cárdenas joined the Constitutionalists, and in the revolt of Agua Prieta he sided with Álvaro Obregón (1880–1928) against Villa. In 1923 he was captured. He later escaped, and was then forced to hide out in Guadalajara, Mexico, for several months. Soon afterwards Cárdenas quickly rose through the military ranks.

During the 1923 rebellion he commanded loyal forces in Michoacán. The following year he was promoted to brigadier general and given command of military operations in Huasteca, Michoacán, and the Isthmus. Cárdenas's rise to military power was greatly helped by his friendship with his commanding general, Plutarco Elias Calles (1877–1945).

By 1924 Calles had become president of Mexico. Thanks in part to his relationship with the president, in 1928 Cárdenas became governor of Michoacán, his home state. He served there until 1932. As governor he actively supported land reform, developed education, and aided labor and peasant organizations through his radical group, Confederacion Revolucionaria Michoacana de Trabajo. To his reputation as an honest military serviceman he added a similar reputation of serving the people of Mexico.

During the following years, Cárdenas served as minister of the government and as minister of war. Cárdenas showed great support for Calles during these years and his loyalty would soon pay off. In 1934 Calles effectively nominated Cárdenas as the presidential candidate for the National Revolutionary Party (PNR). Calles thought he would be able to control his old friend. By this time, however, the Depression (an extended period of economic hardship) had settled in across Mexico. People rallied Cárdenas as a reformer (someone pushing to change social policies) and he gained support for the presidency.

Cárdenas won and entered office with a radical mandate, or command, in the new Six Year Plan. He proceeded to carry it out and gave the people personal attention and patience. His six-year term was marked by maintaining his revolutionary faith. Much of his term was spent on the road visiting remote villages and listening to the complaints and ideas of the people of Mexico.

When Calles challenged his tolerance toward labor, Cárdenas forced him to leave Mexico. Labor gained new power as it reorganized under Lombardo Toledano (1894– 1968) in the Mexican Confederation of Labor. Cárdenas confiscated forty-five million acres of land and distributed them to the ejidos, or peasant communities. The lands included new collective types with large financial and technical support in the cotton region of La Laguna and the henequen (a fiber that comes from the agave plant) area of Yucatán. The nationalization of the railroads was completed and turned over to governmental control. In 1938 petroleum holdings in Mexico owned by foreign countries were also nationalized. This action would be described as Mexico's declaration of economic independence.

In 1938 Cárdenas crushed the last significant regional revolt, which was led by Saturnino Cedillo in San Luis Potosi. Mexico then opened its doors to political exiles (those forced to leave a country for political reasons). These exiles included the Russian revolutionist Leon Trotsky (1879–1940) and a considerable number of Republican Spanish refugees. In the presidential election of 1940 Cárdenas backed moderately conservative Manuel Ávila Camacho (1897–1955) and served him as secretary of defense in 1943. For more than a quarter century Cárdenas remained a political force in Mexico.

In 1960, during the Bay of Pigs episode, where there was a failed attempt to assassinate Cuban prime minister Fidel Castro (1926–), Cárdenas took a strong pro-Castro position, but avoided getting involved in the matter. Cárdenas consistently disappointed those who wanted to link his name with violence and the disruption of the political process. In October 1968 he strongly urged the students to end violence. He remained a supporter of rapid reform, but by peaceful means. He died on October 19, 1970, in Mexico City, Mexico.

Very well written and very informative!!!! I found this information very useful when I had to use it for a history project. I learned a lot of stuff that I didn't already know.
2
chet

well organized. useful information that is more informitave than other sites. "By 1924 Calles had become president of Mexico." Pretty sure it was in 1934.