Emily Brontë was one of three English sisters who had books published in the mid-1800s. Her only major work, Wuthering Heights, is considered one of the greatest novels in the history of literature.

Emily Brontë was born in Thornton in Yorkshire, England, on August 20, 1818, the daughter of Patrick and Maria Branwell Brontë. Her father had been a schoolteacher and tutor before becoming an Anglican minister. She grew up in Haworth in the bleak West Riding area of Yorkshire. Except for an unhappy year at a religious school (described by her sister Charlotte as the Lowood Institution in Jane Eyre ), Emily's education was provided at home by her father, who let his children read freely and treated them as intellectual equals. The early death of their mother and two older sisters drew the remaining children close together.

Living in an isolated village, separated socially and intellectually from the local people, the Brontë sisters (Charlotte, Emily, and Anne) and their brother Patrick Branwell spent the majority of their time in made-up worlds. They described these imaginary worlds in poems and tales and in "magazines" written in miniature script on tiny pieces of paper. As the children grew older, their personalities changed. Emily and Anne created the realm of Gondal. Located somewhere in the north, it was, like West Riding, a land of wild moors (open, grassy areas unsuitable for farming). Unlike Charlotte and Patrick's dream world called Angria, Gondal's laws reflected those of the real world. But this did not mean that Emily found it any easier than her sister to live 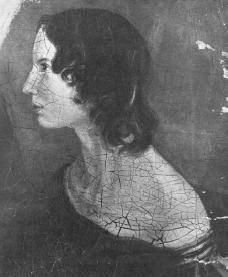 Emily Brontë.
happily as a governess or schoolteacher, which seemed to be their only options for the future.

When, at the age of seventeen, Emily attempted formal schooling for the second time, she suffered a breakdown after three months. She began a teaching position the following year but had to give that up as well. In 1842 she accompanied her sister Charlotte to Brussels, Belgium, for a year to study languages. During this time she impressed the professor as having a finer, more powerful mind than her sister. In October of that year, however, the death of an aunt brought the sisters back home to Haworth. Emily would spend the rest of her life there.

Back home and writing

Emily Brontë did not mind the isolation of Haworth, as being outdoors in the moors gave her a feeling of freedom. Here she experienced the world in terms of forces of nature that cannot be considered good or evil. She believed in the presence of supernatural powers (such as ghosts or spirits) and began to express her feelings in poems such as "To Imagination," "The Prisoner," "The Visionary," "The Old Stoic," and "No Coward Soul."

After Emily Brontë and her sisters discovered that they had all been writing poetry, the three of them put together a collection of poems written under pseudonyms (fake names) that was published in 1846. It did not attract any attention. The sisters then decided to each write a novel and submit all three jointly to publishers. Emily's Wuthering Heights was published in 1847. Set in the moors, it is a story of love and revenge involving a character named Heathcliff, who was abandoned by his parents as an infant, and his effect on two neighboring families. Critical reaction was negative, at least partly due to the many errors in the first printing. Later Wuthering Heights came to be considered one of the great novels of all time.

Emily Brontë died of tuberculosis at Haworth on December 19, 1848. Refusing all medical attention, she struggled to perform her household tasks until the end.