The English evangelist (crusading preacher) William Booth founded the Salvation Army, an international Christian organization for charitable and evangelical work (encouraging people to save their souls through religious faith).

William Booth was born near Nottingham, England, on April 10, 1829, the only son of Samuel and Mary Moss Booth's four children. His father was a building contractor. As a youth, Booth worked as an assistant to a pawnbroker (a moneylender who requires the deposit of an item belonging to the borrower in exchange for the loan). Neither he nor his parents were especially religious. After a conversion (change in beliefs) at age fifteen, however, Booth began preaching in the streets on behalf of a Methodist chapel. The Methodist religion considers preaching more important than ceremony in inspiring devotion.

In 1849 Booth went to London, where he worked for another pawnbroker. Three years later, however, thinking he could do something to help the many poor people he came into contact with, he became a full-time Methodist preacher. His education ended at age thirteen, but through reading and learning from other preachers, he improved his speaking and writing. In 1855 he married Catherine Mumford, an intelligent and determined woman, and went on to have eight children. Encouraged by her in his religious studies, Booth became a minister in 1858.

Booth's belief system was simple and unwavering. He drew both his beliefs and his basic practice from the model set by John Wesley (1703–1791), the founder of Methodism, a century earlier. It required no official religious education. He believed that without personal acceptance of Christ as his savior (one who saves another from destruction), the sinful man would endure eternal suffering. Although the opportunity for acceptance was freely offered to all, it was certain to be ignored by the people in the new run-down 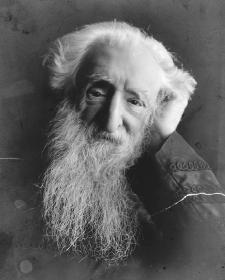 William Booth.
Reproduced by permission of
Getty Images
.
industrial towns, who openly practiced unlawful and immoral behavior. Thus, it was necessary for preachers to reach the ignorant, the drunks, and the criminals and offer them the chance of saving their souls.

Driven by this purpose, in 1861 the Booths left Methodism, and in 1865 they established the Christian Mission in East London, England. During the next twelve years Booth developed the preaching methods later employed by the Salvation Army. Among these were the use of secular (nonreligious) living quarters and the use of reformed sinners as workers. Booth was mainly interested in saving souls. He held no extreme political or social views, and he only gradually came to accept that social improvement might have to come before religious conversion. Thus he slowly built a social program of food kitchens, housing, and group organization. He wrote, however, "The Social is the bait, but it is Salvation that is the hook that lands the fish."

The conversion of the Christian Mission into the Salvation Army occurred somewhat accidentally in 1878. Booth had earlier expressed the seriousness of his mission in military terms, titles, and ideas. This organizational style, not unique to his army, was in tune with the current popularity of and respect for the military. The army's paper, the War Cry, appeared at the end of 1879. Although the army met with considerable opposition through the 1880s, by 1890 Booth had become internationally famous. The day-to-day administrative work of the Salvation Army fell increasingly to Bramwell Booth, General Booth's oldest child and his chief of staff.

Mrs. Booth died in 1890, the year in which Booth wrote, with much assistance from a reforming journalist named W. T. Stead, his famous book, In Darkest England and the Way Out. In it Booth colorfully and sympathetically detailed the problems of the people his army most often tried to reach, and he insisted that the "way out" must involve the changing of men as well as their surroundings.

William Booth is a tower to lean for we salvationist; this is because of all what he did, behind him there must be a Holy Ghost who guided him in all his mission. he laid for us a very strong foundation cemented it with his faith and watered it with the blood of Jesus Christ our saviour, at which when we nourish ourselves with it (the powerful blood of Jesus) we shall automatically be following his steps. Brethrens and fellow salvanists let's try to imitate our founder of the Army of God and be a founder of our brothers and sisters salvation. Amen
2
Harri Cornell