The English writer Jane Austen was one of the most important novelists of the nineteenth century. In her intense concentration on the thoughts and feelings of a limited number of characters, Jane Austen created as profound an understanding and as precise a vision of the potential of the human spirit as the art of fiction has ever achieved. Although her novels received favorable reviews, she was not celebrated as an author during her lifetime.

Family, education, and a love for writing

Jane Austen was born on December 16, 1775, at Steventon, in the south of England, where her father served as a rector (preacher) for the rural community. She was the seventh of eight children in an affectionate and high-spirited family. As one of only two girls, Jane was very attached to her sister throughout her life. Because of the ignorance of the day, Jane's education was inadequate by today's standards. This coupled with Mr. Austen's meager salary kept Jane's formal training to a minimum. To supplement his income as a rector, Mr. Austen tutored young men. It is believed that Jane may have picked up Latin from staying close to home and listening in on these lessons. At the age of six she was writing verses. A two-year stay at a small boarding school trained Jane in needlework, dancing, French, drawing, and spelling, all training geared to produce marriageable young women. It was this social atmosphere and feminine identity that Jane so skillfully satirized (mocked) in her many works of fiction. She never married herself, but did receive at least one proposal and led an active and happy life, unmarked by dramatic incident and surrounded by her family. 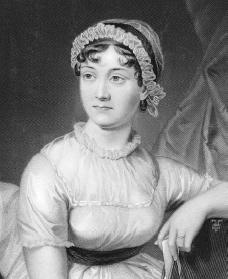 Austen began writing as a young girl and by the age of fourteen had completed Love and Friendship. This early work, an amusing parody (imitation) of the overdramatic novels popular at that time, shows clear signs of her talent for humorous and satirical writing. Three volumes of her collected young writings were published more than a hundred years after her death.

Jane Austen's first major novel was Sense and Sensibility, whose main characters are two sisters. The first draft was written in 1795 and was titled Elinor and Marianne. In 1797 Austen rewrote the novel and titled it Sense and Sensibility. After years of polishing, it was finally published in 1811.

As the original and final titles indicate, the novel contrasts the temperaments of the two sisters. Elinor governs her life by sense or reasonableness, while Marianne is ruled by sensibility or feeling. Although the plot favors the value of reason over that of emotion, the greatest emphasis is placed on the moral principles of human affairs and on the need for enlarged thought and feeling in response to it.

In 1796, when Austen was twenty-one years old, she wrote the novel First Impressions. The work was rewritten and published under the title Pride and Prejudice in 1813. It is her most popular and perhaps her greatest novel. It achieves this distinction by virtue of its perfection of form, which exactly balances and expresses its human content. As in Sense and Sensibility, the descriptive terms in the title are closely associated with the two main characters.

The form of the novel is dialectical—the opposition of ethical (conforming or not conforming to standards of conduct and moral reason) principles is expressed in the relations of believable characters. The resolution of the main plot with the marriage of the two opposites represents a reconciliation of conflicting moral extremes. The value of pride is affirmed when humanized by the wife's warm personality, and the value of prejudice is affirmed when associated with the husband's standards of traditional honor.

During 1797–1798 Austen wrote Northanger Abbey, which was published posthumously (after death). It is a fine satirical novel, making sport of the popular Gothic novel of terror, but it does not rank among her major works. In the following years she wrote The Watsons (1803 or later), which is a fragment of a novel similar in mood to her later Mansfield Park, and Lady Susan (1804 or later), a short novel in letters.

In 1811 Jane Austen began Mansfield Park, which was published in 1814. It is her most severe exercise in moral analysis and presents a conservative view of ethics, politics, and religion.

The novel traces the career of a Cinderella-like heroine, who is brought from a poor home to Mansfield Park, the country estate of her relative. She is raised with some of the comforts of her cousins, but her social rank is maintained at a lower level. Despite their strict upbringing, the cousins become involved in marital and extramarital tangles, which bring disasters and near-disasters on the family. But the heroine's upright character guides her through her own relationships with dignity—although sometimes with a chilling disdainfulness (open disapproval)—and leads to her triumph at the close of the novel. While some readers may not like the rather priggish (following rules of proper behavior to an extreme degree) heroine, the reader nonetheless develops a sympathetic understanding of her thoughts and emotions. The reader also learns to value her at least as highly as the more attractive, but less honest, members of Mansfield Park's wealthy family and social circle.

Shortly before Mansfield Park was published, Jane Austen began a new novel, Emma, and published it in 1816. Again the heroine does engage the reader's sympathy and understanding. Emma is a girl of high intelligence and vivid imagination who is also marked by egotism and a desire to dominate the lives of others. She exercises her powers of manipulation on a number of neighbors who are not able to resist her prying. Most of Emma's attempts to control her friends, however, do not have happy effects for her or for them. But influenced by an old boyfriend who is her superior in intelligence and maturity, she realizes how misguided many of her actions are. The novel ends with the decision of a warmer and less headstrong Emma to marry him. There is much evidence to support the argument of some critics that Emma is Austen's most brilliant novel.

Persuasion, begun in 1815 and published posthumously in 1818, is Jane Austen's last complete novel and is perhaps most directly expressive of her feelings about her own life. The heroine is a woman growing older with a sense that life has passed her by. Several years earlier she had fallen in love with a suitor but was parted from him because her class-conscious family insisted she make a more appropriate match. But she still loves him, and when he again enters her life, their love deepens and ends in marriage.

Austen's satirical treatment of social pretensions and worldly motives is perhaps at its keenest in this novel, especially in her presentation of Anne's family. The predominant tone of Persuasion, however, is not satirical but romantic. It is, in the end, the most uncomplicated love story that Jane Austen ever wrote and, to some tastes, the most beautiful.

The novel Sanditon was unfinished at her death on July 8, 1817. She died in Winchester, England, where she had gone to seek medical attention, and was buried there.

Tyler, Natalie. The Friendly Jane Austen: A Well-Mannered Introduction to a Lady of Sense and Sensibility. New York: Viking, 1999.

Did Jane Austen have children. I know she had one sister, but there is nothing in the article that mentions if she had children or not.