The author of nearly five hundred books, Isaac Asimov was one of the finest writers of science fiction in the twentieth century. Many, however, believe Asimov's greatest talent was for, as he called it, "translating" science, making it understandable and interesting for the average reader.

Isaac Asimov was born on January 2, 1920, in Petrovichi, Russia, then part of the Smolensk district in the Soviet Union. He was the first of three children of Juda and Anna Rachel Asimov. Although his father made a good living, changing political conditions led the family to leave for the United States in 1923. The Asimovs settled in Brooklyn, New York, where they owned and operated a candy store. Asimov was an excellent student who skipped several grades. In 1934 he published his first story in a high school newspaper. A year later he entered Seth Low Junior College, an undergraduate college of Columbia University. In 1936 he transferred to the main campus and changed his major from biology to chemistry. During the next two years Asimov's interest in history grew, and he read numerous books on the subject. He also read science fiction magazines and wrote stories. Asimov graduated from Columbia University with a bachelor's degree in chemistry in 1939.

Asimov's interest in science fiction had begun as a boy when he noticed several of the early science fiction magazines for sale on the newsstand in his family's candy store. His father refused to let him read them. But 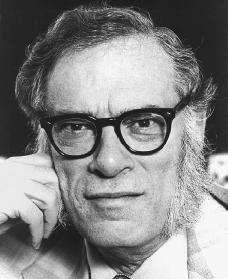 Isaac Asimov.
Reproduced by permission of
AP/Wide World Photos
.
when a new magazine appeared on the scene called Science Wonder Stories, Asimov convinced his father that it was a serious journal of science, and as a result he was allowed to read it. Asimov quickly became a devoted fan of science fiction. He wrote letters to the editors, commenting on stories that had appeared in the magazine, and tried writing stories of his own.

In 1937, at the age of seventeen, he began a story entitled "Cosmic Corkscrew." By the time Asimov finished the story in June 1938, Astounding Stories had become Astounding Science Fiction. Its editor was John W. Campbell, who would go on to influence the work of some of the most famous authors of modern science fiction, including Arthur C. Clarke (1917–), Poul Anderson (1926–2001), L. Sprague de Camp (1907–2000), and Theodore Sturgeon (1918–1985). Since Campbell was also one of the best-known science fiction writers of the time, Asimov was shocked by his father's suggestion that he submit his story to the editor in person. But mailing the story would have cost twelve cents while subway fare, round trip, was only ten cents. To save the two cents, he agreed to make the trip to the magazine's office, expecting to leave the story with a secretary.

Campbell, however, had invited many young writers to discuss their work with him. When Asimov arrived he was shown into the editor's office. Campbell talked with him for over an hour and agreed to read the story. Two days later Asimov received it back in the mail. It had been rejected, but Campbell offered suggestions for improvement and encouraged the young man to keep trying. This began a pattern that was to continue for several years, with Campbell guiding Asimov through his beginnings as a science fiction writer. His first professionally published story, "Marooned off Vesta," appeared in Amazing Stories in 1939.

During the 1940s Asimov earned a master's degree and a doctorate, served during World War II (1939–45) as a chemist at the Naval Air Experimental Station in Philadelphia, Pennsylvania, and became an instructor at Boston University School of Medicine. He also came to be considered one of the three greatest writers of science fiction in the 1940s (along with Robert Heinlein and A. E. Van Vogt), and his popularity continued afterward. Stories such as "Nightfall" and "The Bicentennial Man," and novels such as The Gods Themselves and Foundation's Edge, received numerous honors and are recognized as among the best science fiction ever written.

Asimov's books about robots—most notably I, Robot, The Caves of Steel, and The Naked Sun —won respect for science fiction by using elements of style found in other types of books, such as mystery and detective stories. He introduced the "Three Laws of Robotics": "1. A robot may not injure a human being or, through inaction, allow a human being to come to harm. 2. A robot must obey the orders given it by human beings except where such orders would conflict with the First Law. 3. A robot must protect its own existence as long as such protection does not conflict with the First or Second Laws." Asimov said that he used these ideas as the basis for "over two dozen short stories and three novels … about robots." The three laws became so popular, and seemed so sensible, that many people believed real robots would eventually be designed according to Asimov's basic principles.

Also notable among Asimov's science fiction works is the "Foundation" series. This group of short stories, published in magazines in the 1940s and then collected and reprinted in the early 1950s, was written as a "future history," a story being told in a society of the future which relates events of that society's history. Foundation, Foundation and Empire, and Second Foundation were enormously popular among science fiction fans. In 1966 the World Science Fiction Convention honored them with a special Hugo Award as the best all-time science fiction series. Even many years after the original publication, Asimov's future history series remained popular—in the 1980s, forty years after he began the series, Asimov added a new volume, Foundation's Edge.

Asimov's first works of fiction written mainly for a younger audience were his "Lucky Starr" novels. In 1951, at the suggestion of his editor, he began working on a series of science-fiction stories that could easily be adapted for television. "Television was here; that was clear," he said in his autobiography (the story of his life), In Memory Yet Green. "Why not take advantage of it, then?" David Starr: Space Ranger was the first of six volumes of stories involving David 'Lucky' Starr, agent of the outer space law enforcement agency called the Council of Science. The stories, however, were never made for television.

Asimov's first nonfiction book was a medical text entitled Biochemistry and Human Metabolism. Begun in 1950 it was written with two of his coworkers at the Boston University School of Medicine. His many books on science, explaining everything from how nuclear weapons work to the theory of numbers, take complicated information and turn it into readable, interesting writing. Asimov also loved his work as a teacher and discovered that he was an entertaining public speaker. Before his death in 1992, Asimov commented, "I'm on fire to explain, and happiest when it's something reasonably intricate [complicated] which I can make clear step by step. It's the easiest way I can clarify [explain] things in my own mind."

Dear friends,
Almost 500 books created for us for read, read & read.
After reading, reading & reading, we should create > 5000 books behind for our next generations to read & to learn all our mistakes in life.

"When we do experiments, we wait for the data. When we grow a fruit tree, we wait for the fruits. Science is data; finding it; looking at it, thinking about it. For much of the world data seems quite dull, but for the scientist, data contains hidden within it small sparks which can set the imagination on fire. Each spark of data generates new ideas, new seeds, which will grow in yet undiscovered gardens of research. If we know our own intentions well, there will always be ideas and seeds enough for our grand grand children to harvest and sow again to make the world a little more beautiful each morning." from www.studentvision.org
2
Big Jake

His autobiography ran to 3 big books. After his death, his 2nd wife edited the 3 books into a single volume, thereby excising all the rather intimate remarks which Isaac had no problem revealing initially, but which his 2nd wife preferred that later readers be unaware of. I suspect her version will prevail as it is more likely to stay in print. But if you can find the original 3 books, you will be well rewarded by a more rounded life story.

He had 2 children by his first wife; daughter Robin was his clear favorite. Son David is apparently developmentally disabled and lives off of a trust fund his father set up a number of years before he died. He is barely mentioned in the initial autobiography.