L ouis Armstrong was a famous jazz trumpet player and singer. He is regarded as one of the most important and influential musicians in the history of jazz music.

Louis Daniel Armstrong was born in New Orleans on August 4, 1901. He was one of two children born to Willie Armstrong, a turpentine worker, and Mary Ann Armstrong, whose grandparents had been slaves. As a youngster, he sang on the streets with friends. His parents separated when he was five. He lived with his sister, mother, and grandmother in a rundown area of New Orleans known as "the Battlefield" because of the gambling, drunkenness, fighting, and shooting that frequently occurred there.

In 1913 Armstrong was arrested for firing a gun into the air on New Year's Eve. He was sent to the Waif's Home (a reform school), where he took up the cornet (a trumpet-like instrument) and eventually played in a band. After his release he worked odd jobs and began performing with local groups. He was also befriended by Joe "King" Oliver, leader of the first great African American band to make records, who gave him trumpet lessons. Armstrong joined Oliver in Chicago, Illinois, in 1922, remaining there until 1924, when he went to New York City to play with Fletcher Henderson's band.

When Armstrong returned to Chicago in the fall of 1925, he organized a band and began to record one of the greatest series in the history of jazz. These Hot Five and Hot Seven recordings show his skill and experimentation with the trumpet. In 1928 he started recording with drummer Zutty Singleton and pianist Earl Hines, the latter a musician whose skill matched Armstrong's. Many of the resulting records are masterpieces of detailed construction and adventurous rhythms. During these years Armstrong was working with big bands in Chicago clubs and theaters. His vocals, featured on most records after 1925, are an extension of his trumpet playing in their rhythmic liveliness and are delivered in a unique throaty style. He was also the inventor of scat singing (the random use of nonsense syllables), which originated after he dropped his sheet music while recording a song and could not remember the lyrics. 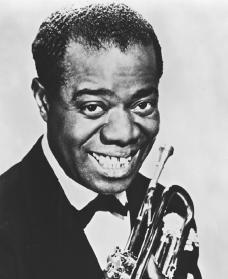 Louis Armstrong.
Reproduced by permission of
Schomburg Center for Research in Black Culture
.
song material, which presented a new challenge. Some notable performances resulted. His trumpet playing reached a peak around 1933. His style then became simpler, replacing the experimentation of his earlier years with a more mature approach that used every note to its greatest advantage. He rerecorded some of his earlier songs with great results.

Armstrong continued to front big bands, often of lesser quality, until 1947, when the big-band era ended. He returned to leading a small group that, though it included first-class musicians at first, became a mere background for his talents over the years. During the 1930s Armstrong had achieved international fame, first touring Europe as a soloist and singer in 1932. After World War II (1939–45) and his 1948 trip to France, he became a constant world traveller. He journeyed through Europe, Africa, Japan, Australia, and South America. He also appeared in numerous films, the best of which was a documentary titled Satchmo the Great (1957).

The public had come to think of Louis Armstrong as a vaudeville entertainer (a light, often comic performer) in his later years—a fact reflected in much of his recorded output. But there were still occasions when he produced well-crafted, brilliant music. He died in New York City on July 6, 1971.

I searched up how Louis Armstong's mom died and this site came up, I clicked on it. And it gave me nothing. -_- Not impressed. But at least it gave actual facts because I know a lot about Louis Armstrong and it is true.