Alexander the Great was one of the best-known rulers in ancient history. By the time of his death at thirty-two, he ruled the largest Western empire of the ancient world.

Alexander was born in 356 B.C.E. to King Philip II of Macedon (382–336 B.C.E. ) and Queen Olympias (375–316 B.C.E. ). Growing up, Alexander rarely saw his father, who was usually involved in long military campaigns. Olympias, a fierce and possessive mother, dominated her son's youth and filled him with a deep resentment of his father. Nonetheless, their son's education was important to both parents. 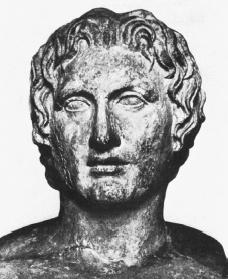 One of Alexander's first teachers was Leonidas, a relative of Olympias, who struggled to control the defiant boy. Philip hired Leonidas to train the youth in math, archery, and horsemanship (the training and care of horses). Alexander's favorite tutor was Lysimachus. This tutor devised a game in which Alexander impersonated the hero Achilles. Achilles was a heroic Greek warrior from a famous ancient poem called the Iliad. Achilles became the model of the noble warrior for Alexander, and he modeled himself after this hero. This game delighted Olympias because her family claimed the hero as an ancestor.

In 343 Philip asked Aristotle (384–322 B.C.E. ), the famous Greek philosopher and scientist, to tutor Alexander. For three years in the rural Macedonian village of Mieza, Aristotle taught Alexander philosophy, government, politics, poetry, drama, and the sciences. Aristotle wrote a shortened edition of the Iliad, which Alexander always kept with him.

Beginnings of the soldier

Alexander's education at Mieza ended in 340 B.C.E. . While Philip was away fighting a war, he left the sixteen-year-old prince as acting king. Within a year Alexander led his first military attack against a rival tribe. In 338 he led the cavalry (troops who fight battles on horseback) and helped his father smash the forces of Athens and Thebes, two Greek city-states.

Alexander's relationship and military cooperation with his father ended soon after Philip took control of the Corinthian League. The Corinthian League was a military alliance made up of all the Greek states except for Sparta. Philip then married another woman, which forced Alexander and Olympias to flee Macedon. Eventually Philip and Alexander were reunited.

In the summer of 336 B.C.E. at the ancient Macedonian capital of Aegai, Alexander's sister married her uncle Alexander. During this event Philip was assassinated by a young Macedonian noble, Pausanias. After his father's death Alexander sought the approval of the Macedonian army for his bid for kingship. The generals agreed and proclaimed him king, making Alexander the ruler of Macedon. In order to secure his throne, Alexander then killed everyone who could have a possible claim to the kingship.

Although he was the king of Macedon, Alexander did not automatically gain control of the Corinthian League. Some Greek states rejoiced at Philip's murder, and Athens wanted to rule the League. Throughout Greece independence movements arose. Immediately Alexander led his armies to Greece to stop these movements. The Greek states quickly recognized him as their leader, while Sparta still refused to join. The League gave Alexander unlimited military powers to attack Persia, a large kingdom to the east of Greece.

In October 335 B.C.E. Alexander returned to Macedon and prepared for his Persian expedition. In numbers of troops, ships, and wealth, Alexander's resources were inferior to those of Darius III (380–330 B.C.E. ), the king of Persia. In the early spring of 334 Alexander's army met Darius's army for the first time. Alexander's army defeated the Persians and continued to move west. Darius's capital at Sardis fell easily, followed by the cities of Miletus and Halicarnassus. The territories Alexander conquered formed the foundations of his Asian empire.

By autumn 334 Alexander had crossed the southern coast of Asia Minor (now Turkey). In Asia Minor, Alexander cut the famous Gordian Knot. According to tradition, whoever undid the intricate Gordian Knot would become ruler of Asia. Many people began to believe that Alexander had godlike powers and was destined to rule Asia.

Then in 333 Alexander moved his forces east and the two kings met in battle at the city of Issus. Alexander was outnumbered but used creative military formations to beat Darius's forces. Darius fled. Alexander then attacked the Persian royal camp where he gained lots of riches and captured the royal family. He treated Darius's wife, mother, and three children with respect. With Darius's army defeated, Alexander proclaimed himself king of Asia.

As a result of the defeat, Darius wanted to sign a truce with Alexander. He offered a large ransom for his family, a marriage alliance, a treaty of friendship, and part of his empire. Alexander ignored Darius's offer because he wanted to conquer all of Asia.

Alexander then pushed on into Egypt. Egypt fell to Alexander without resistance, and the Egyptians hailed him as their deliverer from Persian domination. In every country, Alexander respected the local customs, religions, and citizens. In Egypt he sacrificed to the local gods and the Egyptian priesthood recognized him as pharaoh, or ruler of ancient Egypt. They hailed Alexander as a god. Alexander then worked to bring Greek culture to Egypt. In 331 B.C.E. he founded the city of Alexandria, which became a center of Greek culture and commerce.

In September 331 B.C.E. Alexander defeated the Persians at the Battle of Gaugamela. The Persian army collapsed, and again Darius fled. Instead of chasing after him, Alexander explored Babylonia, which was the region that Darius had abandoned. The land had rich farmlands, palaces, and treasures. Alexander became "King of Babylon, King of Asia, King of the Four Quarters of the World."

Alexander next set out for Persepolis, the capital of the Persian Empire. To prevent an uprising, Alexander burned Persepolis. In the spring of 330 he marched to Darius's last capital, Ecbatana (modern Hamadan). There Alexander set off in pursuit of Darius.

By the time Alexander caught up with Darius in July 330, Darius's assistants had assassinated him. Alexander ordered a royal funeral with honors for his enemy. As Darius's successor, Alexander captured the assassins and punished them according to Persian law. Alexander was now the king of Persia, and he began to wear Persian royal clothing. As elsewhere, Alexander respected the local customs.

After defeating Darius, Alexander pushed eastward toward Iran. He conquered the region, built cities, and established colonies of Macedonians. In the spring of 327 B.C.E. he seized the fortress of Ariamazes and captured the prince Oxyartes. Alexander married Oxyartes's daughter Rhoxana to hold together his Eastern empire more closely in a political alliance.

In the summer of 327 Alexander marched toward India. In northern India, he defeated the armies of King Porus. Impressed with his bravery and nobility, Alexander allowed Porus to remain king and gained his loyalty.

By July 325 the army continued north to the harsh and barren land in the Persian Gulf. The hardship and death that occurred after arriving brought disorganization to the army. It was also at this time that disorder began to spread throughout the empire. Alexander was greatly concerned with the rule of his empire and the need for soldiers, officers, and administrators.

In order to strengthen the empire, Alexander then made an attempt to bind the Persian nobility to the Macedonians to create a ruling class. To accomplish this goal, he ordered eighty of his Macedonian companions to marry Persian princesses. Alexander, although married to Rhoxana, married Stateira, a daughter of Darius, to solidify his rule.

When Alexander incorporated thirty thousand Persians into the army, his soldiers grumbled. Later that summer, when he dismissed his aged and wounded Macedonian soldiers, the soldiers spoke out against Alexander's Persian troops and his Persian manners. Alexander arrested thirteen of their leaders and executed them. He then addressed the army and reminded his soldiers of their glories and honors. After three days the Macedonians apologized for their criticism. In a thanksgiving feast the Persians joined the Macedonians as forces of Alexander.

In the spring of 323 B.C.E. Alexander moved to Babylon and made plans to explore the Caspian Sea and Arabia and then to conquer northern Africa. On June 2 he fell ill, and he died eleven days later.

Alexander's empire had been a vast territory ruled by the king and his assistants. The empire fell apart at his death. The Greek culture that Alexander introduced in the East had barely developed. In time, however, the Persian and Greek cultures blended and prospered as a result of his rule.

I think this is a wonderful biography and it helped me a lot in writing my paper. Keep making helpful biographies like this! Thank you for being so dedicated to the public.
2
Bloodman

Christianity was linked to Alexander the Great because Speaking in Greek was common which helped Christian because they didn't have to speak another language to communicate with them...yw
4
respond please

I only have one question. I'm doing a summer asssignment and i need to know where Alexander the great grew up. Can anyone help me?
5
Darlene

This helped a little but, I just wanted to know who his relatives and friends names and facts about them does anyone know that can help?
6
Rosemary Hansen

Outstanding - including reader’s comment about the Greek language connection to the Bible, hence Christianity.