J ohn Adams, the second president of the United States and the first vice president, also helped in the early years of the republic as a lawyer, writer, congressman, and public speaker. As president, he kept the country at peace when many were calling for war with France. Adams later described his peace decision as "the most splendid diamond in my crown."

John Adams was born in Braintree (now Quincy), Massachusetts, on October 30, 1735, the first of three children born to John Adams and Susanna Boylston Adams. His father was a modest but successful farmer and local officeholder. After some initial reluctance, Adams entered Harvard and received his bachelor's degree in 1755. For about a year he taught school in Worcester, Massachusetts.

Although he gave some thought to entering the ministry, Adams decided to study law instead. While developing his legal practice, he participated in town affairs and contributed essays to Boston newspapers. In 1764 he married Abigail Smith of Wey-mouth, Massachusetts, who was to provide him with important support and assistance during the full life that lay ahead. 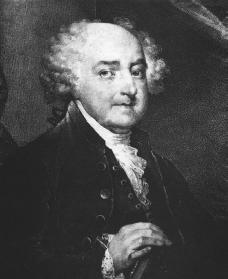 John Adams.
Courtesy of the
Library of Congress
.

By 1765 Adams had become known for his skills as a lawyer. After Great Britain passed the Stamp Act, which imposed taxes on printed materials in the American colonies that many viewed as unfair, he moved into the center of Massachusetts political life. He contributed an important series of essays to the Boston newspapers and prepared a series of anti-Stamp Act resolutions for the Braintree town meetings. These resolutions were copied widely throughout the province. In April 1768 Adams moved to Boston and eventually was elected the city's representative to the Massachusetts legislature.

In the spring of 1771, largely for reasons of health, Adams returned to Braintree, where he divided his attention between farming and law. Within a year, however, he was back in Boston. In 1774 he was one of the representatives from Massachusetts to the First Continental Congress. As a representative he helped write letters of protest to Great Britain. He also continued to write newspaper articles about the colonies and their disputes with Britain.

The war and colonial independence

After the battles of Lexington and Concord in Massachusetts on April 17, 1775, began the Revolutionary War (1775–83), Adams returned to Congress. At this time he believed that independence from Britain would probably be necessary for the American colonies. Congress, however, was not yet willing to agree, and Adams fumed while still more petitions were sent off to England. The best chance of promoting independence, he argued, was for the various colonies to adopt new forms of government. Many provinces sought his advice on setting up these new governments.

By February 1776 Adams was fully committed to American independence. In May, Congress passed a resolution stating that measures should be taken to provide for the "happiness and safety" of the people. Adams wrote the introduction that in effect spelled out the principle of independence. He contributed little to the actual content of the Declaration of Independence but served as "the pillar of its support on the floor of the Congress," according to Thomas Jefferson (1743–1826). On another committee Adams drew up a model treaty that encouraged Congress to enter into commercial alliances (business deals), but not political alliances, with European nations. Exhausted by his duties, he left Philadelphia in mid-October for Massachusetts. For the next year or so he traveled from Massachusetts to Philadelphia to serve in Congress.

In November 1777, Congress elected Adams commissioner to France, and in February he left Boston for what would prove to be an extended stay. Adams spent the next year and a half trying to secure badly needed loans for Congress. He sent numerous long letters to friends and family describing European affairs and observed the French court and national life. After coming home to Massachusetts, Adams was asked by Congress to return to Europe to help negotiate the terms of a peace agreement, which would mark the end of the American Revolution, and then to work on a commercial treaty with Great Britain. The treaty of peace was signed on September 3, 1783.

Before returning permanently to the United States, Adams spent three years as American minister to the Court of Saint James in London. He was unable to make much progress there because relations between the United States and Britain just after the American Revolution were so strained. He also did not have the full support of Congress. Adams eventually resigned and returned to Boston.

Once back in Boston, Adams began the final stage of his political career. He was elected vice president in 1789 and served for two terms under President George Washington (1732–1799). Adams was unhappy in this post; he felt that he lacked the authority to accomplish much. In 1796, despite a strong challenge from Thomas Jefferson and the choice of his own Federalist Party (an early political party that supported a strong federal government) to run a candidate against him, Adams was elected as the second president of the United States.

Adams took office on March 4, 1797. From the beginning his presidency was a stormy one. His cabinet proved difficult to control, and many foreign policy problems arose. The French Revolution (1787–99) and fighting between England and France caused many Americans to take the sides of both those countries. Still others wanted the United States to remain neutral. Adams found himself caught in the middle.

Although anti-French feelings were running high, President Adams committed himself to a plan of peace with France. This decision enraged most of his opponents. The president's attempts to keep peace made sense; America was still young and not fully established, and entering into an unnecessary war could have been a disaster. Many members of his own Federalist Party were opposed to him, however, and in the end Adams lost the next election to Jefferson by a narrow margin. He was so disappointed over his rejection by the American people that he refused to stay to welcome his successor into office.

John Adams spent the remainder of his life at home on his farm. He retained a lively interest in public affairs, particularly when they involved the rising career of his son, John Quincy Adams (1767–1848), who would also become president. Adams divided his time between overseeing his farm and writing letters about his personal experiences as well as more general issues of the day. He died at the age of ninety–one in Quincy, Massachusetts, just a few hours after Jefferson's death, on July 4, 1826.

I think this source should be updated and have more accurate information on the presidency of John Adams. I am a fifth grader and I can write better than most seventh graders. Just Kidding, but seriously people check your writing and pay attention to what you comment. Anyway, add way more info. Thx,