The English author Oscar Wilde was part of the "art for art's sake" movement in English literature at the end of the nineteenth century. He is best known for his brilliant, witty comedies including the play The Importance of Being Earnest and his classic novel The Picture of Dorian Gray.

Oscar Fingall O'Flahertie Wills Wilde was born in Dublin, Ireland, on October 16, 1854. His father, Sir William Wilde, was a well-known surgeon; his mother, Jane Francisca Elgee Wilde, wrote popular poetry and other work under the pseudonym (pen name) Speranza. Because of his mother's literary successes, young Oscar enjoyed a cultured and privileged childhood.

After attending Portora Royal School in Enniskillen, Ireland, Wilde moved on to study the classics at Trinity College, Dublin, from 1871 to 1874. There, he began attracting public attention through the uniqueness of his writing and his lifestyle. Before leaving Trinity College, Wilde was awarded many honors, including the Berkely Gold Medal for Greek.

At the age of twenty-three Wilde entered Magdalen College, Oxford, England. In 1878 he was awarded the Newdigate Prize for his poem "Ravenna." He attracted a group of followers whose members were purposefully unproductive and artificial. "The first duty in life," Wilde wrote in Phrases and Philosophies for the Use of the Young (1894), "is to be as artificial as possible." After leaving Oxford he expanded his cult (a following). His iconoclasm (attacking of established religious institutions) clashed with the holiness that came with the Victorian era of the late nineteenth century, but this contradiction was one that he aimed for. Another of his aims was the glorification of youth.

Wilde published his well-received Poems in 1881. The next six years were active ones. 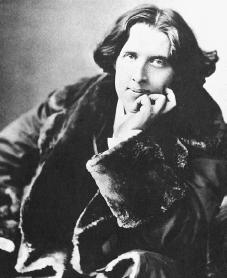 Oscar Wilde.
Courtesy of the
Library of Congress
.
He spent an entire year lecturing in the United States and then returned to lecture in England. He applied unsuccessfully for a position as a school inspector. In 1884 he married, and his wife bore him children in 1885 and in 1886. He began to publish extensively in the following year. His writing activity became as intense and as inconsistent as his life had been for the previous six years. From 1887 to 1889 Wilde edited the magazine Woman's World. His first popular success as a fiction writer was The Happy Prince and Other Tales (1888). The House of Pomegranates (1892) was another collection of his fairy tales.

In 1886 Wilde became a practicing homosexual, or one who is sexually attracted to a member of their own sex. He believed that his attacks on the Victorian moral code was the inspiration for his writing. He considered himself a criminal who challenged society by creating scandal. Before his conviction (found guilty) for homosexuality in 1895, the scandal was essentially private. Wilde believed in the criminal mentality. "Lord Arthur Savile's Crime," from Lord Arthur Savile's Crime and Other Stories (1891), treated murder and its successful cover-up comically. The original version of The Picture of Dorian Gray in Lippincott's Magazine emphasized the murder of the painter Basil Hallward by Dorian as the turning point in Dorian's downfall. Wilde stressed that criminal tendency became criminal act.

Dorian Gray was published in book form in 1891. The novel was a celebration of youth. Dorian, in a gesture typical of Wilde, is parentless. He does not age, and he is a criminal. Like all of Wilde's work, the novel was a popular success. His only book of formal criticism, Intentions (1891), restated many of the views that Dorian Gray had emphasized, and it points toward his later plays and stories. Intentions emphasized the importance of criticism in an age that Wilde believed was uncritical. For him, criticism was an independent branch of literature, and its function was important.

Between 1892 and 1895 Wilde was an active dramatist (writer of plays), writing what he identified as "trivial [unimportant] comedies for serious people." His plays were popular because their dialogue was baffling, clever, and often short and clear, relying on puns and elaborate word games for their effect. Lady Windermere's Fan was produced in 1892, A Woman of No Importance in 1893, and An Ideal Husband and The Importance of Being Earnest in 1895.

On March 2, 1895, Wilde initiated a suit for criminal libel (a statement that damages someone's reputation) against the Marquess of Queensberry, who had objected to Wilde's friendship with his son, Lord Alfred Douglas. When his suit failed in April, countercharges followed. After a spectacular court action, Wilde was convicted of homosexual misconduct and sentenced to two years in prison at hard labor.

Prison transformed Wilde's experience as extremely as had his 1886 introduction to homosexuality. In a sense he had prepared himself for prison and its transformation of his art. De Profundis is a moving letter to a friend and apologia (a formal defense) that Wilde wrote in prison; it was first published as a whole in 1905. His theme was that he was not unlike other men and was a scapegoat, or one who bears blame for others. The Ballad of Reading Gaol (1898) was written after his release. In this poem a man murdered his mistress and was about to be executed, but Wilde considered him only as criminal as the rest of humanity. He wrote: "For each man kills the thing he loves, / Yet each man does not die."

After Wilde was released from prison he lived in Paris, France. He attempted to write a play in his style before his imprisonment, but this effort failed. He died in Paris on November 30, 1900.