Orson Welles was a Broadway and Hollywood actor, radio actor, and film director. His earliest film production, Citizen Kane, was his most famous, although most of his other productions were notable as well.

Orson Welles was born George Orson Welles in Kenosha, Wisconsin, on May 6, 1915, the second son of Richard Welles, an inventor, and Beatrice Ives, a concert pianist. The name George was soon dropped. The family moved to Chicago, Illinois, when Welles was four, and two years later his parents separated formally. The comfortable family life in which Orson was born gradually fell apart. Orson lived with his mother for the next few years and was deeply involved with her artistic lifestyle. Upon her death, his father resumed the task of continuing the eight-year-old Orson's education. An important early influence on his life was Maurice Bernstein, an orthopedist who would eventually be his guardian after his father's suicide in 1928. Upon Dr. Bernstein's suggestion, young Orson was enrolled in the progressive Todd School in Woodstock, Illinois. There, Orson was first introduced to theater and learned a great deal about production and direction. His formal education ended with graduation in 1931.

After a short stay in Ireland, where Welles was involved in the theater as an actor, he returned to Chicago where he briefly served as a drama coach at the Todd School and coedited four volumes of plays by William Shakespeare (1564–1616). He made his Broadway debut with Katharine Cornell's company in December 1934. He and John Houseman (1902–1988) joined forces the next year to manage a unit of the Federal Theatre Project, one of the work-relief arts projects established by the New Deal, a major nationwide social program intended to spark economic recovery during the 1930s. Welles's direction was inspired, injecting new life into various classics, including an all-African American Macbeth, the French farce (humorous ridicule) The Italian Straw Hat, and the morality (having to do with right and wrong) play Dr. Faustus.

Welles and Houseman broke with the Federal Theatre Project over its attempt to shut down their June 1937 production of Marc Blitzstein's pro-labor The Cradle Will Rock. They organized the Mercury Theatre, which over the next two seasons had a number of extraordinary successes, including a modern dress Julius Caesar (with Welles playing Brutus), an Elizabethan working-class comedy Shoemaker's Holiday (rewritten by Welles), and George Bernard Shaw's (1856–1950) Heartbreak House (with the twenty-four-year-old Welles convincingly playing an elderly man). Welles also found time to play "The Shadow" on radio and to supervise a "Mercury Theatre on the Air," whose most notorious success was an adaptation of H. G. Wells's (1866–1946) War of the Worlds, which resulted in panic as many listeners believed that Martians were invading New Jersey.

In 1939 the Mercury Theatre collapsed as a result of economic problems and Welles went to Hollywood, California, to find the cash to resurrect it. Except for a stirring dramatization of Richard Wright's (1908–1960) Native Son in 1940, an unhappy attempt to stage Jules Verne's (1828–1905) Around the World in 80 Days (music and lyrics by Cole Porter (c.1891–1964) in 1946, and an unsatisfactory King Lear in 1956, his Broadway career was over. He did continue theater activity overseas: during the 1950s he successfully staged Moby Dick in England, directed Laurence Olivier (1907–1989) in the London production of Eugène Ionesco's Rhinoceros, and wrote a script for the Roland Petit ballet.

Citizen Kane and other films

Following an early flirtation with movies and after casting around some months for a subject, Welles filmed Citizen Kane in 1939 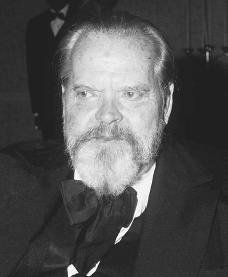 Orson Welles.
Reproduced by permission of
AP/Wide World Photos
.
and 1940. Since its release in 1941 this film has generally been praised as one of the best movies of all time. It is a fascinating study of a newspaper publisher. Controversy surrounds the production of this film, which Welles is credited with producing, directing, and coscripting. He also played the leading role. However one views the making of this film, there is no doubt about his role as its catalyst (a provider of action or quick change).

Years later Welles declared "I began at the top and have been making my way down ever since." All the films he directed are of interest, but none matched his initial achievement of Citizen Kane. Among his other films are The Magnificent Ambersons (1942), The Lady From Shanghai (1946), Othello (1952), Touch of Evil (1958), The Trial (1962), and F Is for Fake (1973). Most of these films have been marked by disputes and Welles often disowned the final version. His critics argue that a self-destructive tendency caused these problems and cite his experiences with the unfinished It's All True, which he embarked on in Brazil in 1942 before finishing the final editing of The Magnificent Ambersons. But his supporters called it a destroyed masterpiece (in his absence, one hundred thirty-one minutes were edited down to a final release print of eighty-eight minutes).

A somewhat hammy actor with a magnificent voice, Welles appeared in over forty-five films besides his own. In some of these films, such as The Third Man (1949) and Compulsion (1959), he was superb. But all too many were junk movies such as Black Magic (1949) and The Tarters (1960). He accepted these so that he might earn the funds necessary to finance films of his own such as Chimes at Midnight (released in 1966, a film based on various Shakespeare plays).

For various reasons Welles left the United States after World War II (1939–45; a war fought between the Axis: Italy, Japan, and Germany—and the Allies: England, France, the Soviet Union, and the United States), and for three decades lived a kind of uprooted existence abroad, with occasional visits back to America for movie assignments or other work. An intelligent individual with many interests, Welles during World War II had put in a stint as a columnist at the liberal New York Post and later gave some thought to a political career. During the latter part of his life, despite being dogged by ill health, he earned a comfortable living doing television commercials for companies such as Paul Masson wines, putting much of what he earned into the production of various films, including The Other Side of the Wind (which dealt with an old filmmaker and which was unfinished at the time of his death as well as being involved in litigation, or legal matters). A superb storyteller, Welles—after moving back to the United States in the mid-1970s—was much in demand as a guest on television talk shows.

Married three times, Welles had children with each wife: Virginia Nicolson (Christopher), Rita Hayworth (Rebecca), and his widow Paola Mori (Beatrice). He had many friends in his lifetime, including Oja Kodar, a Yugoslav artist who was his companion and assistant from the mid-1960s onward. Welles shared an Academy Award for the script of Citizen Kane and in 1975 was honored by the American Film Institute with a Life Achievement Award. His other awards include a 1958 Peabody Award for a TV pilot. Welles died of a heart attack on October 10, 1985.

I met Orson in Venice in 1968 on a back street near San Marks square.
He was dressed in black priests clothes and hat with a big bushy beard and moustache.