Booker Taliaferro (the Washington was added later) was born a slave in Franklin County, Virginia, on April 5, 1856. His mother was the plantation's cook, while his father, a local white man, took no responsibility for him. From a very early age, Washington recalled an intense desire to learn to read and write.

Washington's mother married another slave, who escaped to West Virginia during the Civil War (1861–65; a war in which Northern forces fought against those of the South over, among other things, secession, or the South's desire to leave the Union). She and her three children were liberated (freed) by a Union army in 1865 and, after the war, joined her husband in West Virginia.

The stepfather put the boys to work in the salt mines in Malden, West Virginia. Booker eagerly asked for education, but his stepfather gave in only when Booker agreed to work in the mines mornings and evenings to make up for earnings lost while in school. He had known only his first name, but when students responded to roll call with two names, Booker desperately added a famous name, becoming Booker Washington. Learning from his mother that he already had a last name, he became Booker T. Washington.

Overhearing talk about an African American college in Hampton, Virginia, Washington longed to attend the school. Meanwhile, as houseboy for the owner of the coal mines and saltworks, he developed sturdy work habits. In 1872 he set out for Hampton Institute. When he ran out of money, he worked at odd jobs. Sleeping under wooden sidewalks, begging rides, and walking, he traveled the remaining eighty miles and, tired and penniless, asked for admission and assistance. After Hampton officials tested him by making him clean a room, he was admitted and given work as a janitor. 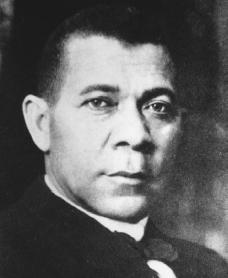 Booker T. Washington.
Reproduced by permission of the
Fisk University Library
.
and earned their way. Washington studied brickmasonry (laying of bricks) along with other courses. Graduating in 1876, he taught in a school for two years. Studying at Wayland Seminary in Washington, D.C., he became bored with classical education, considering his fellow students to be more interested in making an impression and living off the black masses than in serving mankind. He became convinced that practical, manual training in rural skills and crafts would save his race, not higher learning, which separated the reality of the black man's miserable existence. In 1879 he was invited to teach at Hampton Institute, particularly to supervise one hundred Native Americans admitted experimentally. He proved a great success in his two years as part of the teaching staff.

In 1881 citizens in Tuskegee, Alabama, asked Hampton's president to recommend a white man to head their new black college. He suggested Washington instead. The school had an annual legislative appropriation (government money) of two thousand dollars for salaries, but no campus, buildings, students, or staff. Washington had to recruit students and teachers and raise money for land, buildings, and equipment. Hostile rural whites who feared education would ruin black laborers accepted his demonstration that his students' practical training would help improve their usefulness. He and his students built a kiln, an oven used for making bricks, and they erected campus buildings brick by brick.

Under Washington's leadership, Tuskegee Institute became an important force in black education. Tuskegee pioneered in agricultural extension, sending out demonstration wagons that brought better methods to farmers and sharecroppers (farmers who work land owned by another and give a portion of the crop in exchange for the use of the land). Graduates founded numerous "little Tuskegees." African Americans immersed in the poverty of cotton sharecropping improved their farming techniques, income, and living conditions. Washington urged them to become capitalists (business investors), founding the National Negro Business League in 1900. Black agricultural scientist George Washington Carver (c. 1864–1943) worked at Tuskegee from 1896 to 1943, developing new products from peanuts and sweet potatoes. By 1915 Tuskegee had fifteen hundred students and a larger endowment (designated funds) than any other black institution.

In 1895 Washington gave his famous "Atlanta Compromise" speech. Although he shared the late Frederick Douglass's (1817–1895) long-range goals of equality (idea that all races are equal) and integration (bringing different races together), Washington criticized disturbing the peace and other protest strategies. He urged black people to drop demands for political and social rights, concentrating instead on improving job skills and usefulness. "The opportunity to earn a dollar in a factory just now is worth infinitely more than the opportunity to spend a dollar in an opera-house," he said. He appealed to white people to rely on loyal, proven black workers, pointing out that the South would advance to the degree that blacks were allowed to secure education and become productive.

Washington's position so pleased whites, North and South, that they made him the new black spokesman. He became powerful, having the deciding voice in federal appointments of African Americans and in philanthropic grants (charitable donations) to black institutions. Through subsidies, or secret partnerships, he controlled black newspapers, therefore silencing critics. Impressed by his power and hoping his tactics would work, many black people went along. However, increasingly during his last years, such black intellectuals as W. E. B. Du Bois (1868–1963), John Hope (1868–1936), and William Monroe Trotter (1872–1934) criticized his surrender of civil rights (the fight for racial equality) and his stressing of training in crafts, some irrelevant, while forgetting liberal education, which stressed social improvements for black people. Opposition centered in the Niagara Movement, founded in 1905, and the National Association for the Advancement of Colored People (NAACP), which succeeded it in 1910.

Although outwardly calm and nonconfrontational, Washington secretly financed and encouraged attempts and lawsuits to block Southern moves to segregate (to separate black and white Americans) black people and stop them from gaining citizenship. He had lost two wives by death and married a third time in 1893. His death on November 14, 1915, cleared the way for black people to return to Douglass's tactics of protesting for equal political, social, and economic rights. Washington won a Harvard honorary degree in 1891. His birthplace in Franklin County, Virginia, is now a national monument.

you are awesome and a great black man who was into slavery.