Pulitzer Prize-winning novelist Alice Walker is best known for her stories about African American women who achieve heroic stature within the borders of their ordinary day-to-day lives.

Alice Malsenior Walker was born on February 9, 1944, in Eatonton, Georgia, to Willie Lee and Minnie Tallulah (Grant) Walker. Like many of Walker's fictional characters, she was the daughter of a sharecropper (a farmer who rents his land), and the youngest of eight children. At age eight, Walker was accidentally injured by a BB gun shot to her eye by her brother. Her partial blindness caused her to withdraw from normal childhood activities and begin writing poetry to ease her loneliness. She found that writing demanded peace and quiet, but these were difficult things to come by when ten people lived in four rooms. She spent a great deal of time working outdoors sitting under a tree.

Walker attended segregated (separated by race) schools which would be described as inferior by current standards, yet she recalled that she had terrific teachers who encouraged her to believe the world she was reaching for actually existed. Although Walker grew up in a poor environment, she was supported by her community and by the knowledge that she could choose her own identity. Moreover, Walker insisted that her mother granted her "permission" to be a writer and gave her the social, spiritual, and moral substance for her stories.

Upon graduating from high school, Walker secured a scholarship to attend Spelman College in Atlanta, Georgia, where she got involved in the growing Civil Rights movement, a movement which called for equal rights among all races. In 1963, Walker received another scholarship and transferred to Sarah Lawrence College in New York, where she completed her studies and graduated in 1965 with a bachelor's degree. While at Sarah Lawrence, she spent her junior year in Africa as an exchange student. After graduation she worked with a voter registration drive in Georgia and the Head Start program (a program to educate poorer children) in Jackson, Mississippi. It was there she met, and in 1967 married, Melvyn Leventhal, a civil rights lawyer. Their marriage produced one child, Rebecca, before ending in divorce in 1976.

In 1968, Walker published her first collection of poetry, Once. Walker's teaching and writing careers overlapped during the 1970s. She served as a writer-in-residence and as a teacher in the Black Studies program at Jackson State College in Tennessee (1968–69) and Tougaloo College in Mississippi (1970–71). While teaching she was at work on her first novel, The Third Life of Grange Copeland (1970), which was assisted by an award from the National Endowment for the Arts (1969; a government program to provide money to artists). She then moved north and taught at Wellesley College, in Massachusetts, and the University of Massachusetts at Boston (both 1972–73). In 1973 her collection of short stories, In Love and Trouble: Stories of Black Women, and a collection of poetry, Revolutionary Petunias, appeared. She received a Radcliffe Institute scholarship (1971–73), a Rosenthal Foundation award, and an American Academy and Institute of Arts and Letters award (both in 1974) for In Love and Trouble.

Walker's third novel, The Color Purple was published in 1982, and this work won both a Pulitzer Prize and the American Book Award the following year. Walker was also a contributor to several periodicals and in 1983 published many of her essays, a collection titled In Search of Our Mother's Gardens: A Collection of Womanist Prose (1983). Walker worked on her fourth novel while living in Mendocino County outside San Francisco, California.

Walker's first novel, The Third Life of Grange Copeland, centers on the life of a young African American girl, Ruth Copeland, and her grandfather, Grange. As an old man, Grange learns that he is free to love, but love does not come without painful responsibility. At the climax of the novel, Grange summons his newly found knowledge to rescue his granddaughter, Ruth, from his brutal son, Brownfield. The rescue demands that Grange murder his son in order to stop the cycle of cruelty.

Walker's third and most famous novel, The Color Purple, is about Celie, a woman so down and out that she can only tell God her troubles, which she does in the form of letters. Poor, black, female, alone and uneducated, held down by class and gender, Celie learns to lift herself up from sexual exploitation and brutality with the help of the love of another woman, Shug Avery. Against the backdrop of Celie's letters is another story about African customs. This evolves from her 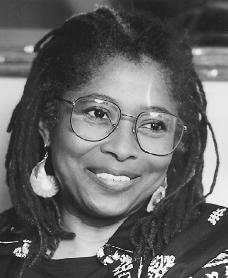 Alice Walker.
Reproduced by permission of
AP/Wide World Photos
.
sister Nettie's letters which Celie's husband hid from Celie over the course of twenty years. Here, Walker presented problems of women bound within an African context, encountering many of the same problems that Celie faces. Both Celie and Nettie are restored to one another, and, most important, each is restored to herself.

At the time of publication of Walker's first novel (in 1970), she said in a Library Journal interview that, for her, "family relationships are sacred." Indeed, much of Walker's work describes the emotional, spiritual, and physical devastation that occurs when family trust is betrayed. Her focus is on African American women, who live in a larger world and struggle to achieve independent identities beyond male domination. Although her characters are strong, they are, nevertheless, vulnerable. Their strength resides in their acknowledged debt to their mothers, to their sensuality, and to their friendships among women. These strengths are celebrated in Walker's work, along with the problems women encounter in their relationships with men who regard them as less significant than themselves merely because they are women. What comes out of this belief is, of course, violence. Hence Walker's stories focus not so much on the racial violence that occurs among strangers but the violence among friends and family members, a kind of deliberate cruelty, unexpected but always predictable.

Walker began her exploration of the terrors that beset African American women's lives in her first collection of short stories, In Love and Trouble. Here she examined the stereotypes about their lives that misshape them and misguide perceptions about them. Her second short story collection, You Can't Keep a Good Woman Down, dramatizes the strength of African American women to rebound despite racial, sexual, and economic difficulties.

I think Alice Walker is an amazing author....BIG fan of "The Color Purple"
2
aaliyah

This biography is very sad. how can u get shot with a bb gun by your own brother
3
lucretia gist

Alice Walker is extraordinary. Raised from a poor farmer, she now is a eminent writer.