The French poet, dramatist, historian, and philosopher Voltaire was an outspoken and aggressive enemy of every injustice but especially of religious intolerance (the refusal to accept or respect any differences).

Voltaire was born as François Marie Arouet, perhaps on November 21, 1694, in Paris, France. He was the youngest of the three surviving children of François Arouet and Marie Marguerite Daumand, although Voltaire claimed to be the "bastard [born out of wedlock] of Rochebrune," a minor poet and songwriter. Voltaire's mother died when he was seven years old, and he developed a close relationship with his godfather, a free-thinker. His family belonged to the upper-middle-class, and young Voltaire was able to receive an excellent education. A clever child, Voltaire studied under the Jesuits at the Collège Louis-le-Grand from 1704 to 1711. He displayed an astonishing talent for poetry and developed a love of the theater and literature.

When Voltaire was drawn into the circle of the seventy-two-year-old poet Abbé de Chaulieu, his father packed him off to Caen, France. Hoping to stop his son's literary ambitions and to turn his mind to pursuing law, Arouet placed the youth as secretary to the French ambassador at The Hague, the seat of government in the Netherlands. Voltaire fell in love with a French refugee, Catherine Olympe Dunoyer, who was pretty but barely educated. Their marriage was stopped. Under the threat of a lettre de cachet (an official letter from a government calling for the arrest of a person) obtained by his father, Voltaire returned to Paris in 1713 and was contracted to a lawyer. He continued to write and he renewed his pleasure-loving acquaintances. In 1717 Voltaire was at first exiled (forced to leave) and then imprisoned in the Bastille, an enormous French prison, for writings that were offensive to powerful people. 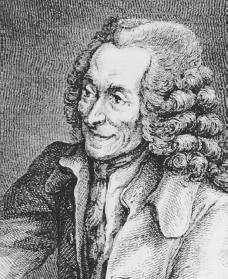 Voltaire.
1718, the revised (changed for improvement) play opened in Paris to a sensational success. The Henriade, begun in the Bastille and published in 1722, was Voltaire's attempt to compete against Virgil (70–19 B.C.E. ) and to give France an epic poem (a long poem centered around a legendary hero).

While Voltaire stayed in England (1726–1728) he was greatly honored; Alexander Pope (1688–1744), William Congreve (1670–1729), Horace Walpole (1717–1797), and Henry St. John, Viscount Bolingbroke (1658–1751), praised him; and his works earned Voltaire one thousand pounds. Voltaire learned English by attending the theater daily, script in hand. He also absorbed English thought, especially that of John Locke (1632–1704) and Sir Isaac Newton (1642–1727), and he saw the relationship between free government and creative business developments. More importantly, England suggested the relationship of wealth to freedom. The only protection, even for a brilliant poet, was wealth.

Voltaire returned to France in 1729. One product of his English stay was the Lettres anglaises (1734), which have been called "the first bomb dropped on the Old Regime." Their explosive potential (something that shows future promise) included such remarks as, "It has taken centuries to do justice to humanity, to feel it was horrible that the many should sow and the few should reap." Written in the style of letters to a friend in France, the twenty-four "letters" were a clever and seductive (desirable) call for political, religious, and philosophic (having to do with knowledge) freedom; for the betterment of earthly life; for employing the method of Sir Francis Bacon (1561–1626), Locke, and Newton; and generally for striving toward social progress.

Prior to 1753 Voltaire did not have a home; but for fifteen years following 1733 he had stayed in Cirey, France, in a château (country house) owned by Madame du Châtelet. While still living with her patient husband and son, Émilie made generous room for Voltaire. They were lovers; and they worked together intensely on physics and metaphysics, a philosophy which investigates the nature of reality.

Honored by a respectful correspondence with Frederick II of Prussia (1712–1786), Voltaire was then sent on diplomatic (having to do with international affairs) missions to Prussia. But Voltaire's new interest was his affair with his widowed niece, Madame Denis. This affair continued its passionate and stormy course to the last years of his life. Émilie, too, found solace in other lovers. The simple and peaceful time of Cirey ended with her death in 1749.

Voltaire then accepted Frederick's repeated invitation to live at court. He arrived at Potsdam (now in Germany) with Madame Denis in July 1750. First flattered by Frederick's hospitality, Voltaire then gradually became anxious, quarrelsome, and finally bored. He left, angry, in March 1753, having written in December 1752: "I am going to write for my instruction a little dictionary used by Kings. 'My friend' means 'my slave.'" Frederick took revenge by delaying permission for Voltaire's return to France, by putting him under a week's house arrest at the German border, and by seizing all his money.

Voltaire's literary productivity did not slow down, although his concerns shifted as the years passed while at his estate in Ferney, France. He was best known as a poet until in 1751 Le Siècle de Louis XIV marked him also as a historian. Other historical works include Histoire de Charles XII; Histoire de la Russie sous Pierre le Grand; and the universal history, Essai sur l'histoire générale et sur les moeurs et l'esprit des nations, published in 1756 but begun at Cirey. An extremely popular dramatist until 1760, he began to be outdone by competition from the plays of William Shakespeare (1564–1616) that he had introduced to France.

The philosophic conte (a short story about adventure) was a Voltaire invention. In addition to his famous Candide (1759), others of his stories in this style include Micromégas, Vision de Babouc, Memnon, Zadig, and Jeannot et Colin. In addition to the Lettres Philosophiques and the work on Newton (1642–1727), others of Voltaire's works considered philosophic are Philosophie de l'histoire, Le Philosophe ignorant, Tout en Dieu, Dictionnaire philosophique portatif, and Traité de la métaphysique. Voltaire's poetry includes—in addition to the Henriade —the philosophic poems L'Homme, La Loi naturelle, and Le Désastre de Lisbonne, as well as the famous La Pucelle, a delightfully naughty poem about Joan of Arc (1412–1431).

Always the champion of liberty, Voltaire in his later years became actively involved in securing justice for victims of persecution, or intense harassment. He became the "conscience of Europe." His activity in the Calas affair was typical. An unsuccessful and depressed young man had hanged himself in his Protestant father's home in Roman Catholic city of Toulouse, France. For two hundred years Toulouse had celebrated the massacre (cruel killings) of four thousand of its Huguenot inhabitants (French Protestants). When the rumor spread that the dead man had been about to abandon Protestantism, the family was seized and tried for murder. The father was tortured; a son was exiled (forced to leave); and the daughters were forcefully held in a convent (a house for nuns). Investigation assured Voltaire of their innocence, and from 1762 to 1765 he worked in their behalf. He employed "his friends, his purse, his pen, his credit" to move public opinion to the support of the Calas family. In 1765, Parliament declared the Calas family innocent.

Voltaire's influence continued to be felt after his death in Paris on May 30, 1778.