Harry S. Truman (1884–1972), thirty-third president of the United States, led America's transition from wartime to peacetime economy, created the Truman doctrine, and made the decision to defend South Korea against communist invasion.

Harry S. Truman was born in Lamar, Missouri, on May 8, 1884. He went to high school in Independence, Missouri. From 1900 until 1905 he held various small business positions, then for the next twelve years he farmed on his parents' land. In 1917, soon after the United States entered World War I (1914–18; a war fought in Europe between the Central Powers—Germany, Austria-Hungary, and Turkey—and the Allies—France, Great Britain, Russia, Italy, Japan, and, after 1917, the United States), he enlisted in the artillery, serving in France. After returning from the war, he married Bess Wallace (1885–1982) in 1919. The couple had one child, Margaret.

As Truman grew to manhood, he achieved a notable change. As president he would be known for his outgoing personality and for his use of such tough-talking phrases as "The buck stops here!" and "If you can't stand the heat, get out of the kitchen." As a boy, however, Truman was anything but tough and outgoing. He was accident-prone and sickly, and his poor vision and thick glasses forced him to avoid the rough activities in which other boys engaged. Instead, he stayed indoors, taking piano lessons and reading. One of his favorite books as a boy, Great Men and Famous Women, detailed the lives of influential historical and political figures.

A loyal Democrat, Truman entered politics in the 1920s. He was elected as a Jackson County, Missouri, judge in 1922 and served until 1924. He was presiding judge from 1926 to 1934, giving close attention to problems of county administration.

In the national election of 1934, Truman, who was a firm supporter of President Franklin Roosevelt (1882–1945), was chosen U.S. senator from Missouri. Reelected in 1940, he gained national attention as chairman of the Senate Committee to Investigate the National Defense Program. He kept his chairmanship loyal to the Roosevelt administration. When Roosevelt was nominated for a fourth presidential term in June 1944, he chose Truman for vice president.

Thrust into the presidency

Roosevelt was reelected, but after Truman had served only eighty-two days as his 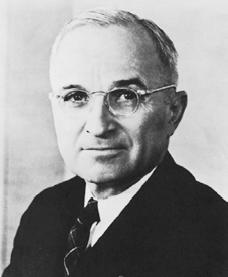 Harry S. Truman.
Courtesy of the
Library of Congress
.
vice president, Roosevelt died suddenly on April 12, 1945. Truman then became the president. He quickly took command, and in his first address to Congress he promised to continue Roosevelt's policies. That July he attended the Potsdam Conference, Germany, at which the United States, Great Britain, and the Soviet Union set terms for the administration of Germany after World War II (1939–45; a war fought between the Axis powers—Germany, Italy, and Japan—and the Allied powers—mainly Great Britain, France, the Soviet Union, and after 1942, the United States). Later in the summer he authorized the dropping of the atomic bomb on Hiroshima, Japan, on August 6, 1945, and approved the surrender of the Japanese in a treaty signed on September 2, 1945.

The Truman administration quickly took steps to dismantle the military forces and the agencies set up to conduct the war, as well as to resume production of peacetime goods. Truman was soon forced to tackle inflation (a steep rise in the cost of living) and new demands by labor unions. He showed his power of quick decision declaring wage increases that were needed to cushion the blows from changes in the economy. He also sternly opposed measures to restrict labor organizations and acted to maintain union rights.

Truman also called for a broad program of social welfare. Although sharp friction developed between the Truman administration and conservatives (people who resist change and prefer to keep traditions) in Congress, he pushed measures through Congress for clearing away slums, construction of low-cost housing, health insurance, and the establishment of the Council of Economic Advisers to help citizens gain full employment.

In his foreign policy, Truman was alarmed by the growing power of the Soviet Union, a communist nation. He feared the spread of Soviet influence in eastern Europe and Asia, and he supported strong Western reaction to the threat of Soviet expansion. As Soviet aggressiveness made the international scene stormier, he gave vigorous support to the establishment of the United Nations.

In the wake of World War II, Turkey and Greece seemed to be at risk of economic collapse and communist takeover. To prevent this from happening, Truman backed the leaders of his State Department in their stand for continued American support to democracy abroad and asked Congress for $400 million in funds to sustain Turkey and Greece. He also announced the Truman Doctrine (March 12, 1947), declaring that the United States would support all free peoples who were resisting attempts to dominate them, either by armed minorities at home or aggressors outside their borders.

Truman's policy made it possible for members of his state department to push through Congress the important measure known as the Marshall Plan, which began in April 1948. The plan provided for the transfer of large amounts economic aid from Western nations to countries in Europe and Asia that were threatened by communist domination. The presidential campaign of 1948 came as the Marshall Plan gathered widespread support from democratic governments in Europe, South America, Africa, and elsewhere.

In 1948 Truman entered the presidential contest and fought a stubborn battle against Republican Thomas E. Dewey (1902–1971). Truman faced heavy odds in this presidential race. Besides the Democratic and Republican candidates, the entry of two new political parties into the battle made the outcome doubtful.

As the election drew near most newspapers seemed confident that Dewey would win. Public opinion polls also indicated a Dewey victory. On election night, Truman went to bed as the Chicago Tribune published a special issue with the headline "Dewey Defeats Truman!" The next morning, however, Truman awoke to find the he had not only carried the country by more than two million votes but had also brought in a Democratic Congress.

On Sunday, June 25, 1950, the Korean War (1950–53) began when North Korean Communist forces invaded the Republic of South Korea. Truman at once summoned an emergency conference and announced that he would pledge American armed strength for the defense of South Korea. By September 15, American troops, supported by other forces of the United Nations, were in action in Korea. Truman held firm in the costly war that followed but hesitated to approve a major advance across the Yalu River on the northwest border of North Korea and China. China had entered the war on North Korea's side partly to protect its territory in this area.

In April 1951, amid national frustration over the war, Truman dismissed General Douglas MacArthur (1880–1964) as head of the Far East Command of the U.S. Army. He took this action on the grounds that MacArthur—a national hero of World War II (1939–45)—had repeatedly challenged the Far Eastern policies of the administration and had recommended the use of bombs against Chinese forces north of the Yalu. Such an attack against the Chinese might have provoked open war with the Soviet Union and cost the United States the support of important allies in the war. Nevertheless, MacArthur's dismissal was highly controversial, and Truman announced that he would not run again for the presidency. He retired to private life, publishing two volumes of memoirs (memories) in 1955 and 1956.

Truman died on December 26, 1972, but his popularity continued to soar long after his death. New books and movies about him have continued to appear, and he has been commemorated with a U.S. postage stamp.