The Russian novelist and moral philosopher (person who studies good and bad in relation to human life) Leo Tolstoy ranks as one of the world's great writers, and his War and Peace has been called the greatest novel ever written.

Leo (Lev Nikolayevich) Tolstoy was born at Yasnaya Polyana, his family's estate, on August 28, 1828, in Russia's Tula Province, the youngest of four sons. His mother died when he was two years old, whereupon his father's distant cousin Tatyana Ergolsky took charge of the children. In 1837 Tolstoy's father died, and an aunt, Alexandra Osten-Saken, became legal guardian of the children. Her religious dedication was an important early influence on Tolstoy. When she died in 1840, the children were sent to Kazan, Russia, to another sister of their father, Pelageya Yushkov.

Tolstoy was educated at home by German and French tutors. He was not a particularly exceptional student but he was good at games. In 1843 he entered Kazan University. Planning on a diplomatic career, he entered the faculty of Oriental languages. Finding these studies too demanding, he switched two years later to studying law. Tolstoy left the university in 1847 without taking his degree.

Tolstoy returned to Yasnaya Polyana, determined to become a model farmer and a "father" to his serfs (unpaid farmhands). His charity failed because of his foolishness in dealing with the peasants (poor, working class) and because he spent too much time socializing in Tula and Moscow. During this time he first began making amazingly honest diary entries, a practice he maintained until his death. These entries provided much material for his fiction, and in a very real sense the collection is one long autobiography.

Nikolay, Tolstoy's eldest brother, visited him at in 1848 in Yasnaya Polyana while on leave from military service in the Caucasus. Leo greatly loved his brother, and when he asked him to join him in the south, Tolstoy agreed. After a long journey, he reached the mountains of the Caucasus, where he sought to join the army as a Junker, or gentleman-volunteer. Tolstoy's habits on a lonely outpost consisted of hunting, drinking, sleeping, chasing the women, and occasionally fighting. During the long lulls he first began to write. In 1852 he sent the autobiographical sketch Childhood to the leading journal of the day, the Contemporary. Nikolai Nekrasov, its 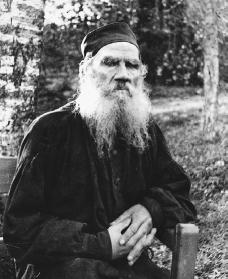 Leo Tolstoy.
Courtesy of the
Library of Congress
.
editor, was ecstatic, and when it was published (under Tolstoy's initials), so was all of Russia. Tolstoy then began writing The Cossacks (finished in 1862), an account of his life in the outpost.

From November 1854 to August 1855 Tolstoy served in the battered fortress at Sevastopol in southern Ukraine. He had requested transfer to this area, a sight of one of the bloodiest battles of the Crimean War (1853–1956; when Russia battled England and France over land). As he directed fire from the Fourth Bastion, the hottest area in the conflict for a long while, Tolstoy managed to write Youth, the second part of his autobiographical trilogy. He also wrote the three Sevastopol Tales at this time, revealing the distinctive Tolstoyan vision of war as a place of unparalleled confusion and heroism, a special space where men, viewed from the author's neutral, godlike point of view, were at their best and worst.

When the city fell, Tolstoy was asked to make a study of the artillery action during the final assault and to report with it to the authorities in St. Petersburg, Russia. His reception in the capital was a triumphant success. Because of his name, he was welcomed into the most brilliant society. Because of his stories, he was treated as a celebrity by the cream of literary society.

In September 1862, Tolstoy married Sofya Andreyevna Bers (or Behrs), a woman sixteen years younger than himself. Daughter of a prominent Moscow doctor, Bers was beautiful, intelligent, and, as the years would show, strong-willed. The first decade of their marriage brought Tolstoy the greatest happiness; never before or after was his creative life so rich or his personal life so full. In June 1863 his wife had the first of their thirteen children.

The first portion of War and Peace was published in 1865 (in the Russian Messenger ) as "The Year 1805." In 1868 three more chapters appeared, and in 1869 he completed the novel. His new novel created a fantastic out-pouring of popular and critical reaction.

Tolstoy's War and Peace represents a high point in the history of world literature, but it was also the peak of Tolstoy's personal life. His characters represent almost everyone he had ever met, including all of his relations on both sides of his family. Balls and battles, birth and death, all were described in amazing detail. In this book the European realistic novel, with its attention to social structures, exact description, and psychological rendering, found its most complete expression.

From 1873 to 1877 Tolstoy worked on the second of his masterworks, Anna Karenina, which also created a sensation upon its publication. The concluding section of the novel was written during another of Russia's seemingly endless wars with Turkey. The novel was based partly on events that had occurred on a neighboring estate, where a nobleman's rejected mistress had thrown herself under a train. It again contained great chunks of disguised biography, especially in the scenes describing the courtship and marriage of Kitty and Levin. Tolstoy's family continued to grow, and his royalties (money earned from sales) were making him an extremely rich man.

The ethical quest that had begun when Tolstoy was a child and that had tormented him throughout his younger years now drove him to abandon all else in order to seek an ultimate meaning in life. At first he turned to the Russian Orthodox Church, visiting the Optina-Pustyn monastery in 1877. But he found no answer.

In 1883 Tolstoy met V. G. Chertkov, a wealthy guard officer who soon became the moving force behind an attempt to start a movement in Tolstoy's name. In the next few years a new publication was founded (the Mediator ) in order to spread Tolstoy's word in tract (pamphlets) and fiction, as well as to make good reading available to the poor. In six years almost twenty million copies were distributed. Tolstoy had long been watched by the secret police, and in 1884 copies of What I Believe were seized from the printer.

During this time Tolstoy's relations with his family were becoming increasingly strained. The more of a saint he became in the eyes of the world, the more of a devil he seemed to his wife. He wanted to give his wealth away, but she would not hear of it. An unhappy compromise was reached in 1884, when Tolstoy assigned to his wife the copyright to all his works before 1881.

Tolstoy's final years were filled with worldwide acclaim and great unhappiness, as he was caught in the strife between his beliefs, his followers, and his family. The Holy Synod (the church leaders) excommunicated (kicked him out) him in 1901. Unable to endure the quarrels at home he set out on his last pilgrimage (religious journey) in October 1910, accompanied by his youngest daughter, Alexandra, and his doctor. The trip proved too much, and he died in the home of the stationmaster of the small depot at Astapovo, Russia, on November 9, 1910. He was buried at Yasnaya Polyana.