William Makepeace Thackeray was born on July 18, 1811, in Calcutta, India. He was the only child of Richmond and Anne Thackeray. His family had made its fortunes in the East India Company for two generations. In 1817, after the death of his father, five-yearold Thackeray was sent to England to live with his aunt while he received his education. He was a precocious (showed the characteristics of an older person at a young age) child and showed a talent for drawing.

Around 1818 Thackeray's mother married Major Carmichael Smyth, an engineer and author. In 1821 the two moved back to England and reunited with Thackeray, who developed a close relationship with his step-father. When Thackeray was eleven, he was sent to the prestigious Charterhouse School. Schoolmates described him as a student who was not too serious, but very sociable. Also, he did not enjoy or participate in any sports or games. However, he did learn about gentlemanly conduct—an ideal that later he both criticized and upheld.

In 1829 Thackeray entered Trinity College at Cambridge University, where he was only an average student. He left the university the next year, convinced that it was not worth his while to spend more time in pursuit of a second-rate degree under an unsuitable educational institution. A six-month stay in Weimar, Germany, gave Thackeray a more 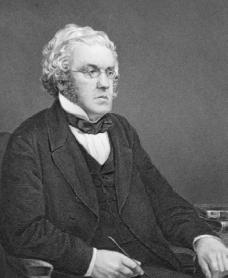 William Makepeace Thackeray.
Courtesy of the
Library of Congress
.
sophisticated polish, as well as a more objective view of English manners. After Thackeray returned to London, he began studying law at the Middle Temple. He seemed more devoted to the fashionable but expensive habits of drinking and gambling that he had acquired at Cambridge, however.

At the age of twenty-one Thackeray rejected law and went to Paris, France, to study French, to draw, and to attend plays. The inheritance he acquired at that age soon disappeared into bad business ventures, bad investments, and loans to needy friends. Unfortunately, he was unable to distinguish himself as an artist. He met Isabella Shawe while in Paris, and they married in 1836. They had two daughters.

Between 1837 and 1844 Thackeray wrote critical articles on art and literature for numerous papers and journals, but he contributed most of his fiction of this period to Fraser's Magazine. In The Memoirs of C. J. Yellowplush, which appeared in a series from 1837 to 1838, he parodied (humorously wrote in the style of) the high-flown language of "fashnabble" novels. In Catherine (1839–1840) he parodied the popular criminal novel. "A Shabby Genteel Story" (1840) and other short compositions explored the world of rogues (dishonest people) and fools in a spirit of extreme and bitter disappointment. The Irish Sketch Book (1843) and Notes of a Journey from Cornhill to Cario (1845), supposedly written by the confirmed Londoner Mr. M. A. Titmarsh, were in a lighter vein.

In the fall of 1840 Thackeray's wife suffered a mental breakdown from which she never recovered. This experience profoundly affected his character and work. He became more sympathetic and less harsh in his judgments, and came to value domestic affection as the greatest good thing in life. These new attitudes emerged clearly in the best of his early stories, "The History of Samuel Titmarsh and the Great Hoggarty Diamond"(1841). In this tale an obscure (not distinct) clerk rises to sudden success and wealth but finds true happiness only after ruin has brought him back to hearth and home.

Adopting the mask of an aristocratic (upper-class) London bachelor and clubman named George Savage Fitz-Boodle, Thackeray next wrote a number of papers satirizing (pointing out and devaluing sin or silliness) his way of life. The series called "Men's Wives," which was written at the same time, shows a maturing sense of comedy and tragedy. With The Luck of Barry Lyndon (1844) Thackeray returned to an earlier subject, the gentleman scoundrel. His central theme is the ruin of a young man's character by false ideals of conduct and worldly success.

As a regular contributor to the satiric magazine Punch between 1844 and 1851, Thackeray finally achieved widespread recognition. His most famous contribution was The Snobs of England, by One of Themselves (1846–1847). It was a critical survey of the manners of a period in which the redistribution of wealth and power caused by industrialism (the rise of industry) had shaken old standards of behavior and social relationships.

Vanity Fair (1847–1848) established Thackeray's fame permanently. Set in the time just before and after the Battle of Waterloo (1815; a battle that ended French domination of Europe), this novel is a portrait of society and centers on three families interrelated by acquaintance and marriage. In the unrestrained and resourceful Becky Sharp, Thackeray created one of fiction's most engaging characters.

In Pendennis (1849–1850) Thackeray concentrated on one character. The story of the development of a young writer, the first part draws on Thackeray's own life at school, at college, and as a journalist. The second half, which he wrote after a severe illness, lost the novel's focus. It presents only a superficial (having insincere and shallow qualities) analysis of character in Pen's struggle to choose between a practical, worldly life and one of domestic virtue.

The History of Henry Esmond (1852), Thackeray's most carefully planned and executed work, is a historical novel set in the eighteenth century. He felt a temperamental sympathy with this age of satire and urbane wit. Esmond presents a vivid and convincing realization of the manners and historical background of the period. It contains some of Thackeray's most complex and firmly controlled characters.

The Newcomes (1854–1855) is another serial. Supposedly written by the hero of Pendennis, it chronicles the moral history of four generations of an English family. The most massive and complex of Thackeray's social panoramas, it is also the darkest in its relentless portrayal of the defeat of humane feeling by false standards of respectability.

Thackeray, feeling that he had written himself out, returned to earlier works for subjects for his later novels. The Virginians (1858–1859) follows the fortunes of Henry Esmond's grandsons in the United States, and The Adventures of Philip (1862) continues "A Shabby Genteel Story." His later career included an unsuccessful campaign for Parliament as a reform candidate in 1857, and two lecture trips to the United States in 1852 and 1855. A founding editor of the Cornhill Magazine, he served it from 1859 to 1862.

Thackeray was 6 feet 3 inches tall, and a pleasant and modest man, fond of good food and wine. In the years of his success he openly took great pleasure in the comforts of the society that he portrayed so critically in his novels. Thackeray died on December 24, 1863, in London, England.

When William Makepeace Thackeray began his literary career, Charles Dickens (1812–1870) dominated English prose (having to do with the common language) fiction. Thackeray's writing style was formed in opposition to Dickens's accusation of social evils, and against the artificial style and sentimentality (emotionalism) of life and moral (having to do with right and wrong) values of the popular historical romances. Although critical of society, Thackeray remained basically conservative (a person who prefers to preserve existing social and political situations without change). He was one of the first English writers of the time to portray the commonplace with greater realism. This approach was carried on in the English novel by Anthony Trollope (1815–1882).