One of England's most important playwrights, Czechoslovakian-born Tom Stoppard is popular in the United States as well. His two great stage successes were Rosencrantz and Guildenstern Are Dead and The Real Thing, and he reached an even wider audience—and won an Academy Award—for his screenplay for the 1998 film Shakespeare in Love.

The second son of a doctor for the Bata shoe manufacturing company, Thomas Straussler (Stoppard) was born on July 3, 1937, in Zlin, Czechoslovakia. The family fell victim to the Nazi racial laws, a wide-ranging set of laws enforced by Germany's radical Nazi Army that were aimed at severely restricting the freedoms of Jews and other minorities. Since there was "Jewish blood" in the family, his father was transferred to Singapore in 1939, taking the family with him. When the Japanese invaded that city in 1942, Thomas's mother fled with her children to India. Dr. Straussler stayed behind and was later killed.

Thomas attended an American boarding school in Darjeeling, India. In 1946 his mother married Kenneth Stoppard, a British army major, and both of her sons took his name. The Stoppards moved to Bristol, England, where Thomas's stepfather worked in the machine tool industry. Thomas continued his education at a preparatory school in Yorkshire, England.

At age seventeen Thomas felt that he had had enough schooling. He became first a reporter and then a critic for the Western Daily Press of Bristol, England, from 1954 to 1958. He left the Press and worked as a reporter for the Evening World, also in Bristol, from 1958 to 1960. Stoppard then worked as a freelance reporter from 1960 to 1963. During these years he experimented with writing short stories and short plays. In 1962 he moved to London, England, in order to be closer to the center of the publishing and theatrical worlds in the United Kingdom.

Stoppard's first radio plays for the British Broadcasting Company (BBC), The Dissolution of Dominic Boot and M Is for Moon Among Other Things, aired in 1964. Two more, Albert's Bridge and If You're Glad I'll Be Frank, followed in 1965. His first television play, A Separate Peace, appeared the next year, as did his only novel, Lord Malquist and Mr. Moon, and the stage play that established his reputation 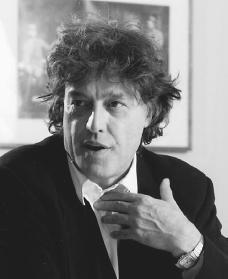 Tom Stoppard.
Reproduced by permission of
AP/Wide World Photos
.
as a playwright, Rosencrantz and Guildenstern Are Dead.

The year 1968 saw another television play, Neutral Ground, and two short works for the theater, Enter a Free Man and The Real Inspector Hound. In 1970 Stoppard returned to the BBC with the two radio plays, Artist Descending a Staircase and Where Are They Now. He also authored the television plays The Engagement and Experiment in Television as well as the stage work After Magritte. It was about this time that Stoppard became acquainted with Ed Berman from New York City's Off-Off-Broadway. Berman was attempting to establish an alternative theater in London. For him Stoppard composed Dogg's Our Pet, which was produced in 1971 at the Almost Free Theater.

In 1972 Stoppard had presented Jumpers, which begins with circus acts and evolves into religious and moral philosophy (the study of knowledge). Although critics reacted warmly to the play, Jumpers did not enjoy the same praise that had greeted Rosencrantz and Guildenstern. Theater critic Stanley Kauffmann labeled it "fake, structurally and thematically," while another critic, John Simon, wrote that "there is even something arrogant about trying to convert the history of Western culture into a series of blackout sketches, which is very nearly what Jumpers is up to."

Two years later Stoppard produced his third major work, Travesties. It is based on the coincidence that Russian exile politician Vladimir Lenin (1870–1924), Irish novelist James Joyce (1882–1941), and the father of the French Dadaist movement in literature and art, Tristan Tzara (1896–1963), were all in Zurich, Switzerland, at times during World War I (1914–18; when German-led forces pushed for European domination). It is assumed that they never met in reality, but their interaction in Stoppard's play asks the question of what defines art. The author's conclusion seems to be that its sole function is to make the meaninglessness (complete emptiness) of life more bearable.

In 1977 Stoppard offered Every Good Boy Deserves Favour, a remarkable achievement performed for the first time at the Royal Festival Hall by the Royal Shakespeare Company and the one hundred-piece London Symphony Orchestra, conducted by Andre Previn (1929–). Brought to the United States, it was presented at the Metropolitan Opera House in New York City with an eighty-one-piece orchestra.

Stoppard summed up his life's work as an attempt to "make serious points by flinging a custard pie around the stage for a couple of hours." Some of his serious points must have been heard in 1999, when he shared the Academy Award for Best Original Screenplay with Marc Norman for their work on the movie Shakespeare in Love. The movie also won the award for Best Picture of the year.