Beverly Sills was a child performer, coloratura soprano (a light voice used in a very ornate type of singing), and operatic (in operas) superstar who retired from her performance career in 1980 to become general director of the New York City Opera Company.

Beverly Sills was born Belle Miriam Silverman in Brooklyn, New York, on May 25, 1929, during the era of Shirley Temple (1928–) and other child stars of the movies. Her father was an insurance salesman who wanted his daughter to become a teacher. Her mother had different plans, however. Sills was singing on the radio by age three. At the age of four she was a regular on a children's Saturday morning radio program. At seven she sang in a movie and had already memorized twenty-two opera arias (solos). She continued to perform on radio shows and did laundry soap commercials, which got her the nickname "Bubbles." She left radio work at age twelve to pursue her love of opera.

After Sills graduated from grammar school she attended the Professional Children's School in New York City. By the time she was nineteen she had memorized between fifty and sixty operas. She studied voice privately with her lifelong associate Estelle Liebling and eventually achieved professional competence on the piano as well, studying with Paolo Gallico.

Billed as "the youngest prima donna in captivity," Sills joined a Gilbert and Sullivan touring company in 1945. Two years later she sang her first operatic role with the Philadelphia (Pennsylvania) Opera Company. She toured with several different small opera companies starting in 1948.

Sills made her debut with the New York City Opera on October 29, 1955, singing Rosalinde in Die Fledermaus. The critics loved her and predicted great success for her career. Eventually she would command a vast repertoire of one hundred roles, actively performing sixty of them in one hundred opera or concert appearances each year at the peak of her career. Her great memory allowed her not only to master her own enormous repertoire of roles but also to understand the other principal roles in the operas she performed. This ability earned her a reputation not only as a singer on the stage but as an actress as well.

In 1956 Sills married Peter Bulkeley Greenough, associate editor of the Cleveland Plain Dealer. She and her husband had two children. Their daughter was born hearing impaired and their son was developmentally 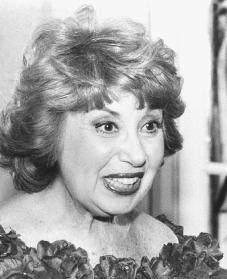 Beverly Sills.
Reproduced by permission of
AP/Wide World Photos
.
disabled. Their son had to be institutionalized (put in a hospital) when he was six due to the great amount of care he required. Sills carried two watches, one set to her son's schedule in the time zone where he lived, so that she could always know what he was doing. The tragedies with her children would lead Sills into philanthropic (helping others through work and donations) work later in her career.

On July 8, 1966, Sills sang Donna Anna in Don Giovanni with the Metropolitan Opera, but her formal debut with the Metropolitan Opera did not actually occur until 1975. Sills was able to rise to the top of her profession before touring Europe. She finally did so in 1967, a guest of the Vienna State Opera. She went on to sing in Buenos Aires, Argentina; La Scala in Milan, Italy; and Covent Garden, London, England. She also performed in Naples, Italy; Berlin, Germany; and Paris, France.

On October 27, 1980, Sills gave her last performance. Opera critics said it was overdue, as her voice had been deteriorating (weakening) for some time due, in part, to health problems. The very next day she assumed the general directorship of the New York City Opera. She displayed great management skill and public relations talent, appearing on popular television programs and in other ways representing opera to a wide audience. She helped pull the New York City Opera out of both financial and public crises.

In 1972 Sills added philanthropy to her list of careers, becoming the national chairman of the Mothers' March on Birth Defects. She continues to be a highly visible active public figure, promoting both operatic and philanthropic causes.

In 1989 Sills formally retired and remained in quiet seclusion with her husband for about five years. In 1994 she returned to public life as the chairwoman of the Lincoln Center for the Performing Arts. At this point in her life Sills says "I've done everything I set out to do … sung in every opera house I wanted to … to go on past the point where I should, I think would break my heart. I think my voice has served me very well."