The English painter and poet Dante Gabriel Rossetti was a cofounder of the Pre-Raphaelite Brotherhood, a band of painters that reacted against unimaginative and traditional historical paintings. His works show a passionate imagination, strongly contrasting Victorian art which was popular during the second half of the nineteenth century.

Born on May 12, 1828, in London, England, of English-Italian parents, Dante Gabriel Rossetti was surrounded throughout his childhood in the atmosphere of medieval Italy, which drew heavily from art and literature from the sixth to fifteenth centuries. This influence became a major source of his subject matter and artistic inspiration later in his career. As a child, almost as soon as he could speak, he began composing plays and poems. He also liked to draw and was a bright student. After two years in the Royal Academy schools he studied briefly under Ford Madox Brown in 1848.

Shortly after Rossetti joined William Holman Hunt's studio in 1848, the Pre-Raphaelite Brotherhood was formed, in Hunt's words, "to do battle against the frivolous [silly] art of the day." An association of artists so varied in artistic style, technique, and expressive spirit as the Pre-Raphaelites could not long survive, and it was principally owing to Rossetti's forceful, almost hypnotic personality that the Brotherhood held together long enough to achieve the critical and popular recognition necessary for the success of its mission.

Rossetti did not have the natural technical talent that is seen in the small detail and brilliant color of a typical Pre-Raphaelite painting, and his early oil paintings, the Girlhood of Mary Virgin (1849) and the Ecce Ancilla Domini (1850), were produced only at the expense of great technical effort. In the less demanding technique of watercolor, however, Rossetti clearly revealed his imaginative power. The series of small watercolors of the 1850s produced such masterpieces as Dante's Dream (1856) and the Wedding of St. George and the Princess Sabra (1857).

In almost all of Rossetti's paintings of the 1850s he used Elizabeth Siddal as his model. Discovered in a hat shop in 1850, she was adopted by the Brotherhood as their ideal of feminine beauty. In 1852 she became exclusively Rossetti's model, and in 1860 his wife. Struggling with growing depression, she killed herself two years later. Rossetti buried a manuscript of his poems in her coffin, a characteristically dramatic gesture which he later regretted. Beata Beatrix (1863), a posthumous portrait (portrait done after her death) of Elizabeth Siddal is one of Rossetti's most deeply felt paintings. It is one of his last masterpieces and the first in a series of symbolic, female portraits, which declined gradually in quality as his interest in painting decreased.

Although poetry was simply a relaxation from painting early in Rossetti's career, writing later became more important to him, and in 1871 he wrote to fellow painter Ford Madox Brown, "I wish one could live by writing poetry." In 1861 he published his translations from Dante (1265–1321) and other early Italian poets, reflecting the medieval obsessions of his finest paintings. In 1869 the manuscript of his early poems was recovered from his wife's coffin and published the next year.

Rossetti's early poems under strong Pre-Raphaelite influence, such as "The Blessed Damozel" (1850; later revised) and "The Portrait," have an innocence and spiritual passion paralleled by his paintings of the 1850s. As his interest in painting declined, Rossetti's poetry improved, until in his later works, such as "Rose Mary" and "The White Ship" 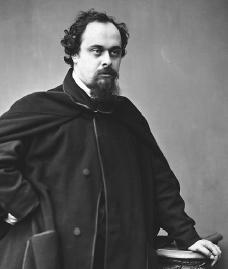 Dante Gabriel Rossetti.
Reproduced by permission of the
Corbis Corporation
.
(both included in Ballads and Sonnets, 1881), his use of richly colored word textures achieves fantastic expression and feeling.

Rossetti died on April 9, 1882, in Birchington-on-Sea, Kent, England. Rossetti had reached a position of artistic respect, and his spirit was a significant influence on the cultural developments of the late nineteenth century. Although his technique was not always the equal of his powerful feeling, his imaginative genius earned him a place in the ranks of England's most forward-thinking artists.