Eleanor Roosevelt was the wife of Franklin Delano Roosevelt (1882– 1945), the thirty-second president of the United States. She was a well-known philanthropist (a person who works to aid others through charity). She was also an author, a world diplomat, and a tireless champion of social causes.

Anna Eleanor Roosevelt was born in New York, New York, on October 11, 1884. Her family was financially comfortable but troubled. Her father was Elliott Roosevelt, the younger brother of Theodore Roosevelt (1858–1919), who served as president of the United States. Although handsome and charming, Elliott suffered from frequent mental depression and alcoholism. Eleanor's mother was preoccupied with the family's image in upper-class society and embarrassed by Eleanor's appearance—which was not considered pretty.

Although Eleanor's father was often absent, she regarded him as a glamorous and exciting parent. When Eleanor was a child, her father entered an institution for alcoholics. It was one of many early losses for the young girl, whose mother died when she was just eight years old. After her mother's death, Eleanor and her two younger brothers went to live with their maternal grandmother in New York. Shortly thereafter the older brother died, and when Eleanor was not yet ten, she learned that her father had died. Her grandmother sheltered her from all outside contact except for family acquaintances. 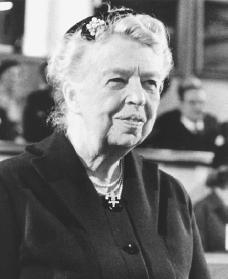 Eleanor Roosevelt.
school for young women at South Fields, England, at age fifteen. The school's head-mistress (female principal) taught her students a sense of service and responsibility to society. Eleanor began to act upon this teaching after her return to New York, plunging into work for the good of others. At that same time, her tall, handsome cousin, Franklin Delano Roosevelt, began courting her. They were married in March 1905. Eleanor now had to contend with a controlling mother-inlaw and with a husband who loved to be out in public and who did not really understand Eleanor's struggle to overcome her shyness and insecurity.

Between 1906 and 1916, the Roosevelts had six children, one of whom died as an infant. The family lived in Hyde Park, New York, while Franklin pursued his political ambitions to become a leading figure in the Democratic Party. He served a term in the New York State Senate before President Woodrow Wilson (1856–1924) appointed him assistant secretary of the Navy in 1913. Although Eleanor did much work for the Red Cross (a charitable medical organization) during World War I (1914–18), she remained out of the public eye.

A major turning point in Eleanor's life came in 1921, when Franklin contracted polio (an infectious disease that can cause paralysis). Franklin suffered from paralysis and permanently lost the use of his legs. Although Franklin's mother insisted that Franklin accept his condition and retire, Eleanor finally asserted her will over her mother-in-law and nursed him back into activity. Within a few years he had regained his strength and political ambitions. Meanwhile, Eleanor had become more of a public figure, speaking and working for the League of Women Voters (an organization that promoted active involvement in government), the National Consumers' League (an organization focused on the welfare of consumers and workers), the Women's Trade Union League (an organization concerned with better working conditions for women), and the women's division of the New York State Democratic Committee. She began to act as Franklin's "legs and ears" and acquired a certain reputation of her own. After Franklin became governor of New York in 1928, she kept busy inspecting state hospitals, homes, and prisons for her husband.

Franklin Roosevelt's election to the presidency in 1932 meant, as Eleanor later wrote, "the end of any personal life of my own." She quickly became the best-known (and also the most criticized) first lady in American history. She evoked both intense admiration and strong hatred from her fellow Americans.

As first lady, Eleanor gave radio broadcasts and wrote a column that appeared in newspapers across the country. She traveled throughout the United States on fact-finding trips for Franklin. In particular, she became a voice for those in need, including working women, African Americans, youth, and tenant farmers. Such groups had been severely affected by the economic crisis known as the Great Depression (1929–39; the longest and most severe economic depression in the United States), which Franklin Roosevelt had tried to combat through the series of social programs known as the New Deal. Eleanor spoke out freely on issues, and she also became a key contact within the administration for officials seeking the president's support. In short, Eleanor became a kind of go-between between the individual citizen and the government, as well as between the president and some members of his administration.

During the 1930s Eleanor was particularly concerned with creating equal opportunities for women and with making sure that appropriate jobs for writers, artists, musicians, and theater people became a key part of the New Deal employment program known as the Works Progress Administration (WPA). She also promoted the cause of Arthurdale, a farming community built by the government for unemployed miners in West Virginia. She was concerned with providing work for jobless youth, both white and black. Much more than her husband, she spoke out against racism and tried to aid the struggle of black Americans toward full citizenship.

As the United States moved toward war in the late 1930s, Eleanor Roosevelt spoke out forcefully in favor of her husband's foreign policy. She accepted an appointment as deputy director in the Office of Civilian Defense but resigned in 1942 after being criticized for being a poor administrator in this position. After the United States formally entered World War II (1939–45) in 1941, she made numerous trips overseas to boost the spirits of troops and to inspect Red Cross facilities.

After Franklin Roosevelt died in office in April 1945, Eleanor was expected to retire to a quiet, private life. However, by the end of the year she was back in public. America's new president, Harry S. Truman (1884–1972), made her the American representative to the United Nations Commission on Human Rights. She remained in this post through 1952. Later, she continued to work for international understanding and cooperation as a representative of the American Association for the United Nations.

During the last decade of her life Eleanor Roosevelt traveled to numerous foreign countries, including the Soviet Union. She completed her Autobiography (1961), which included her earlier books This Is My Story (1937), This I Remember (1949), and On My Own (1958). By the early 1960s her strength had lessened. She died in New York City on November 6, 1962.

Despite her shy and lonely girlhood, Eleanor Roosevelt became one of the most important American women of the twentieth century. Her personal and social outlook inspired millions.

I have a couple of questions that I need answered please: 1. In Eleanor Roosevelt: A Life of Discovery, which one did Freedman not use in his research? Anecdotes or other biographies. Also, What type of biography did Freedman write in Eleanor Roosevelt? A fictionialized biography, biographical fiction, authentic biography, or biographical authenticity? Did Eleanor make speeches in support of her husband's campaigns? Finally, in what ways was Eleanor Roosevelt a "champion of civil rights?" in her role as First Lady. Provide two specific instances where her actions denounced discriminatory behavior. Please for your help with this. Please e-mail me the information.