Often billed as "the world's greatest rock and roll band," the English rock group the Rolling Stones has outlasted nearly all of its 1960s peers and continues to belt out hits well into the group's collective middle age.

Birth of a legend

The Rolling Stones were formed as early as 1949 when the two main members of the group, guitarist Keith Richards and singer Mick Jagger, went to school together. Richards (surname sometimes listed as Richard, born December 18, 1943, in Dartford, Kent, England) was the only child of Bert and Doris Richards, a working-class couple. His father was a foreman in a General Electric factory. Jagger (Michael Philip Jagger, born July 26, 1943, in Dartford, Kent, England) was one of Joe and Eva Jagger's two sons. His father was a physical education instructor. Both Richards and Jagger were fans of American musicians such as Chuck Berry (1926–) and Bo Diddley (1928–).

Eleven years later the two crossed paths again. At the time, Jagger was attending London's School of Economics, while Richards was struggling at Sidcup Art College. They found out about a local musician named Alexis Korner who held blues jams at the Ealing Club. After Jagger began to sing for Korner's Blues Incorporated, he decided to join a group that Richards was putting together. Other members included pianist Ian Stewart, bass player Dick Taylor, drummer Tony Chapman, and a guitar player named Brian Jones (Lewis Brian Hopkins-Jones, born February 28, 1942, in Cheltenham, Gloucestershire, England, died July 3, 1969). Jones, although only one year older than Jagger and Richards, had already fathered two children by the time he was sixteen. And while Richards was more influenced by the playing of Chuck Berry, Jones was a pure blues player.

Charlie Watts (Charles Robert Watts, born June 2, 1941, in Islington, England) was drumming for a jazz group when he was asked to replace Tony Chapman. The oldest member, bassist Bill Wyman (William Perks, born October 24, 1936 [some sources say 1941]), replaced Dick Taylor and completed the group. Manager Andrew Loog Oldham got them work at the Marquee Club in London, England, in 1963, billed as "Brian Jones and The Rollin' Stones" (after a song by Muddy Waters [1915–1983]). With hair longer than any other group and a bad-boy attitude, the Stones became known as "the group parents love to hate." Their public image was constantly fueled by Oldham, who also decided that pianist Stewart did not fit in and pushed him to the background.

Oldham got the Stones a contract with Decca Records, and in June 1963 they released their first single, a version of Chuck Berry's "Come On" backed with "I Want to Be Loved." Reaction was good, and it would only take another six months for the group to make it big. Continuing their eight-month residence at the Crawdaddy Club in Richmond, England, they released their version of the Beatles's "I Wanna Be Your Man" followed by Buddy Holly's (1936–1959) "Not Fade Away." Their fourth single, "It's All Over Now" by Bobby Womack, would climb all the way to number one (reflecting highest sales and radio play) in their homeland. Their next hit, "Little Red Rooster," also reached number one but was banned in the United States.

The Rolling Stones already had two albums out in England by the time they broke the U.S. Top 10 with "The Last Time," written by Jagger and Richards. In the summer of 1965 they had a worldwide number one hit with "Satisfaction." Allan Klein then took over as manager, and in 1966 the band released Aftermath, its first album of all original songs. In 1967 the Stones recorded Their Satanic Majesties Request, noted mainly for being the last album that Brian Jones, who had become heavily involved with drugs, truly worked on. After 1968's Beggar's Banquet, Jones finally quit (or was kicked out of) the band in June 1969. Less than one month later he drowned in a swimming pool; the official cause of death was listed as "death by misadventure." 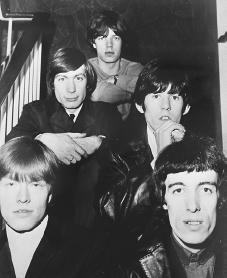 The Rolling Stones.
Courtesy of the
Library of Congress
.
first album after he joined, Let It Bleed, contained two haunting tunes, "Midnight Rambler" and "Gimme Shelter." The latter became the title of the movie documenting the Stones' free concert at Altamont, California, at which members of the Hell's Angels motorcycle gang (who had been hired as security guards) stabbed a man to death right in front of the stage. The group also released a live album from that tour, Get Yer Ya Ya's Out.

In 1971 The Stones formed their own label, Rolling Stones Records, and they began to experiment with different kinds of music. Sticky Fingers contained songs with touches of jazz and country. Exile on Main Street has come to be regarded as their finest recording. Its country influence was stronger than ever, but the album also contains gospel, blues, and allout rock. Their next two albums, Goat's Head Soup and It's Only Rock and Roll, were viewed as so-so efforts. In 1975 Taylor decided to walk away from the band. "I really got off on playing with them, but it wasn't enough of a challenge," he told Rolling Stone magazine.

Guitarist Ron Wood (born June 1, 1947, in London, England), who played with the Faces, fit the Stones mold perfectly, with the same musical roots and a look that was almost a carbon copy of Richard. Wood took Taylor's place on a 1975 tour of America, bounding back and forth with the Faces before finally joining the Stones full time. The first full album he contributed to was Black and Blue in 1976. The group's future was in doubt in 1977 when Richards was arrested in Toronto, Canada, for drug dealing, but his sentence did not include any jail time. "Drugs were never a problem," he told Edna Gundersen. "Policemen were a problem." After 1978's classic Some Girls, the later Stones records are hard to tell apart. Only the 1981 hit "Start Me Up" stands out from this period.

During the 1980s it was often rumored that the Rolling Stones would break up. Richards was not happy when Jagger took time off to work on his first solo album. Jagger then refused to tour to support the Stones' Dirty Work, instead hitting the road to promote his own She's The Boss. Richards, who had himself toured with Wood's New Barbarians in 1979, was outraged that Jagger would make the Stones a second choice. Richards released his own solo album, Talk Is Cheap.

Although other solo albums and side projects followed, rumors of the band's breakup were put on hold in 1989, when the Stones announced plans for a new album and a world tour. Steel Wheels quickly sold over two million copies, and the accompanying tour, which earned over one hundred forty million dollars, was a hit with music reviewers and fans. However, Steel Wheels was to be Bill Wyman's last album and tour with the Stones—he announced his retirement in 1993. With Darryl Jones replacing Wyman, the Stones next released Voodoo Lounge, an album that in many ways was meant to recreate the classic Stones sound of the early 1970s. The album would go on to sell four million copies, and the supporting tour went on to become the highest grossing tour of all time.

Rumors of a Rolling Stones breakup eventually stopped. The band settled into the routine of producing a new album and going on tour every few years. Although they came under fire for the high prices of tickets (as high as three hundred dollars a seat on their 1999 tour), interest in their concerts remained high. In their free time, each member kept busy in his own way: Jagger worked on films and released other solo albums, including Goddess in the Doorway; Richards made solo albums and guest appearances on albums by blues artists such as Hubert Sumlin; Ron Wood, after receiving treatment for alcohol abuse, opened the Harrington Club in London, a private club devoted to healthy living (its restaurant serves only organic vegetables); Charlie Watts, with the help of drummer and producer Jim Keltner, released The Charlie Watts/Jim Keltner Project, a solo drum album; Bill Wyman also remained busy (while insisting he did not regret leaving the band), writing books and recording music.

In 2001 Jagger and Richard appeared at Paul McCartney's (1942–) Concert for New York City to raise money for victims of the September 11 terrorist attacks on the United States. In 2002 the Rolling Stones announced another tour, which led to more grumbling about high ticket prices. Still, there seemed to be no decrease in the number of people willing to pay any price to see the legendary band.

Sanchez, Tony. Up and Down with the Rolling Stones. New York: Da Capo Press, 1996.